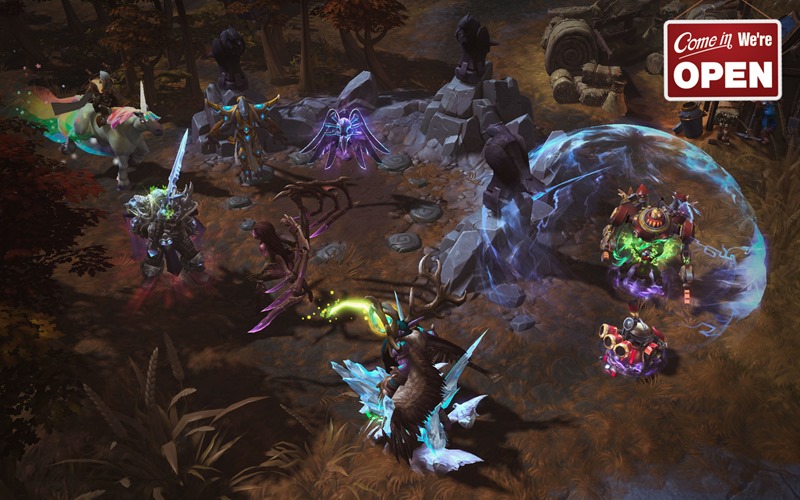 I’ve said it once, and I’ll say it a million times more; If you’ve even remotely considered getting into the MOBA craze, Blizzard’s Heroes of the Storm is the best place to get started. It stripped away part of what makes other titles in the same genre difficult; namely items, gold management, and even skill selection to a certain extent. The open beta kicks off today, meaning that if you somehow didn’t grab a key over the past few months already, you can hop into the Nexus right this second. Alternately, if you’d rather skip the clicking, and favour drawing instead, you can enter Blizzard’s new design contest; there are $13000 worth of prizes up for grabs!

The open beta comes just 13 days before the game is due to officially launch. Here’s the announcement and trailer from Blizzard:

Get ready to unleash the Burning Hells with Diablo, kick up a revolution with Raynor, and seek vengeance with Sylvanas, because Heroes of the Storm Open Beta testing has officially begun! If you didn’t get the chance to leap into the fray during our Technical Alpha or Closed Beta phases, right now is a great opportunity for you and your pals to dive headlong into our raucous online team brawler before the game launches on June 2. That’s right—no more keys, codes, or opt-ins; you can click here to start downloading Heroes and embark on your conquest in the Nexus, for free, today.

Oh Blizzard, you can call it a team brawler as much as you like, but it’s still a MOBA at the end of the day. I will admit it though that it deviates from the standard formula quite a bit thanks to multiple battlegrounds and different objectives.

As stated earlier, if you couldn’t be bothered with actually playing the game, at least you can still win some prizes – assuming you have some sort of artistic talent. Blizzard are teaming up with DeviantArt to bring this competition to life:

Sharpen your favorite weapons and prepare to fight, because now you and all of your friends can join the fight for the Nexus! To celebrate the upcoming launch of Heroes of the Storm™, Blizzard Entertainment and DeviantArt have joined forces to bring you a truly epic fan art contest. With over $13,000 worth of prizes and an original sketch from Sam Didier up for grabs, we’re calling all talented artists from this side of Azeroth, the Koprulu Sector, Sanctuary, and beyond to take up their styluses to defend the Nexus!

Your challenge, Heroes, is to assemble the mightiest heroes from across Warcraft®, Diablo®, Starcraft®, and more and create an original artwork depicting characters from two or more different Blizzard universes engaged in battle. With powerful heroes including all of your favorites awaiting your call, who will you choose?

There is just over a month left to enter this competition. If you’re interested, best you get cracking!

Artistic shenanigans aside, does the open beta of Heroes of the Storm interest you? Will you be diving into the Nexus?