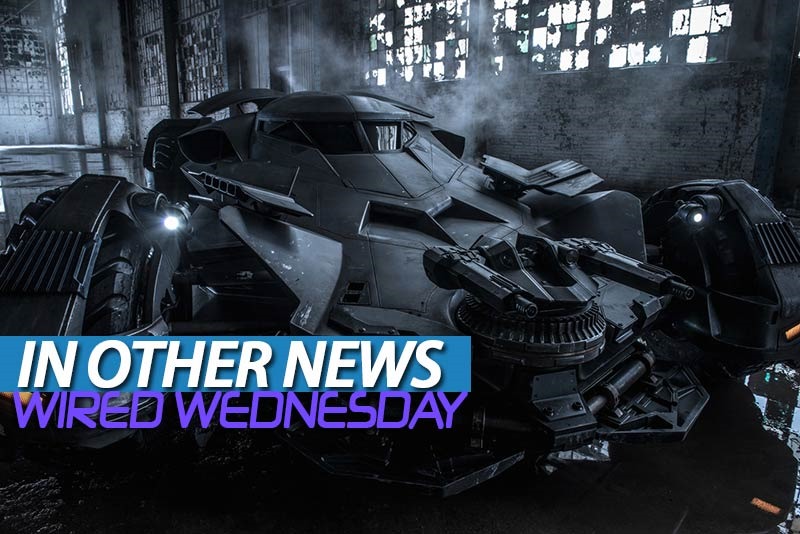 With Zoe not here, I’m taking over see! Wired Wednesday belongs to the D now! SO WHAT’CHU GONNA DO, WHEN TEAMD-MANIA RUNS WILD ALL OVER YOU?! Usually, Zoe populates Wired Wednesday with something silly, like a curved TV or your mom’s neck massager. Not me. I’m posting an image of something that is fictional in a real-world style. I am of course, talking about the Batmobile. And not just any Batmobile, but the latest in crime-fighting technology that’ll steal the show in Batman V Superman: Dawn of Justice.

I mean, just look at it. It’s a proper car, that much like every other Batmobile ever made for the films, actually works. It’s a piece of art, and a lethal panther on four wheels. And I’ve yet to steal it off the movie lot…successfully.

In Other News: Battlefield sold plenty of hard limes, Xbox One owners go rogue soon, the sexiest looking video game consoles ever made and get to know more about Kitty Powers.

Here’s the news we didn’t post today, because we were too busy tripping on a combination of Redbull, electric shocks and paint fumes in order to get content out today.

Battlefield Hardline: 80% of copies were sold on PS4 and Xbox One
Half-Life remake Black Mesa comes to Steam Early Access today
Star Wars Battlefront will not have aiming-down-ironsights
Don’t expect Titanfall 2 before April 2016
Edmund McMillen wants to improve The Lost in The Binding of Isaac: Rebirth
Multiplayer mayhem comes to Medieval Engineers
Xbox One owners can explore Rogue Legacy on May 27

The best looking video game consoles of all time
Warhammer 40,000: Regicide is chess with gibbing
Half-Life 3 – Fake concept art for a game that will never exist
The intimate particulars of Kitty Powers

SA’s Weekend Top 10 (1 to 3 May)
CAPTAIN AMERICA: CIVIL WAR will build up to the mother of all fights in AVENGERS: INFINITY WAR, plus it has a hobbit!
It’s Sherlock’s last case in this full trailer for MR. HOLMES
It’s time to fight or die in this trailer for THE STRAIN Season Two
We review SUPERFAST! – Just…no, just don’t
Midweek Movie Mouth-off: filming gimmicks
Everybody down! It’s the final trailer for SAN ANDREAS!
The second STAR WARS ANTHOLOGY film will reportedly be a Boba Fett origin story