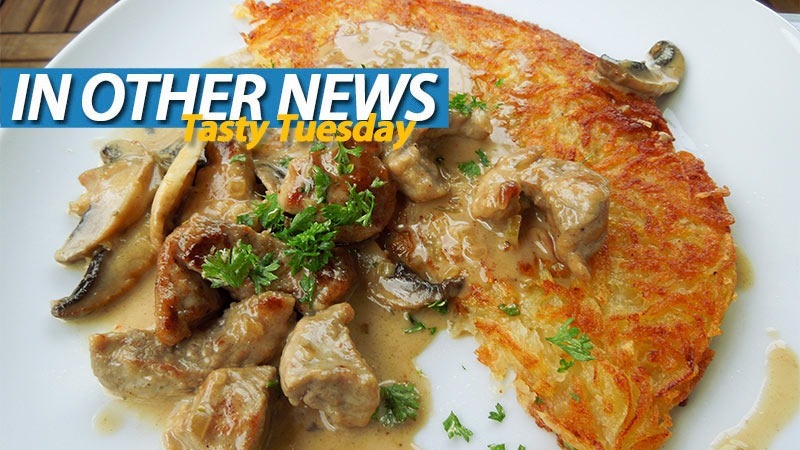 Zurcher Geschnetzeltes. No I didn’t just sneeze with a mouth full of marshmallows. Instead, it’s one of my favourite comfort foods. Hailing from the German side of Switzerland – a country that’s famed more for its cheese, chocolate, and inability to pick sides – it’s a simple dish of strips veal, fried up with onions, white wine, cream and mushrooms. It’s usually served with a potato Rosti – essentially a great big, crispy hashbrown, or Spatzle, an extruded, delicious, knobbly egg noodle. And man, as the weather starts cooling, there’s nothing I’d want more than a belly full of the stuff.

In Other News: Stuff, I guess. Check the links.

Here’s the news we didn’t post because we were trying to 3D print my genitals, but couldn’t find a printer capable of working to such a miniature scale.

What if we could control the Aliens?
The day I killed my hero
The first five games that I play when I upgrade my PC

Lucy Lawless joins the EVIL DEAD tv series
Sony is planning more GHOSTBUSTERS with Channing Tatum and Chris Pratt starring
This new trailer for SAN ANDREAS will have you jumping over cracks
KINGSMAN: THE SECRET SERVICE is the best film to never hit the number one spot
The future is running out in this incredible new trailer for TOMORROWLAND
The gods demand a new trailer for GAME OF THRONES season 5!
China’s DMG Entertainment sign 9-figure movie development deal with comic publisher Valiant
Director Chris McQuarrie talks MISSION: IMPOSSIBLE 5; trailer, title, tone and more