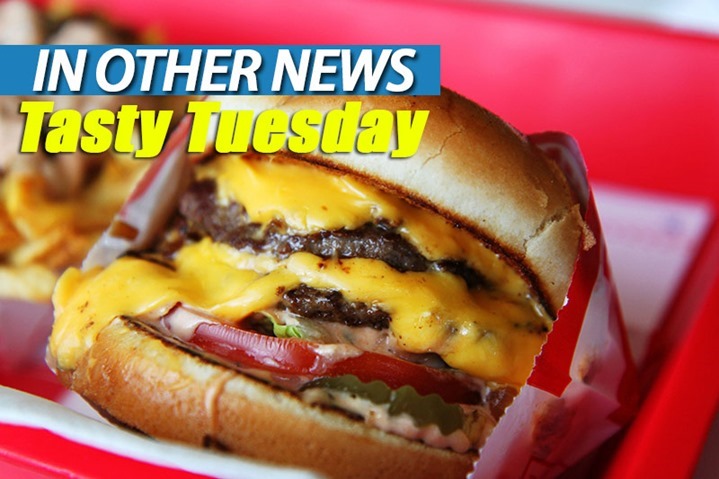 I’m under strict, strict instructions from Geoff to not post a Tasty Tuesday ION about KFC and their dunked wings, which taste like spicy heaven had hell invaded and set fire to the Pearly Gates with secret herbs and spices. So fine. I won’t talk about KFC for once. Instead, I’ll introduce you to one of the greatest fast foods that I have ever had the joy of experiencing. I’m talking about the…

…In ‘n Out Double Down burger. Animal style baby! It’s an LA delicacy that Geoff introduced me to during my very first trip to E3 back in 2013, and it has become a Lazygamer tradition to pig out on one of these every time we’re in the city of angels. Unlike other fast food burgers, In ‘n Out boasts ingredients fresher than my phat beats at a rap battle, with the prices for one of these tastebud treasures being well in the affordable range. They’re also deceptively filling for their size, and nothing beats having covered a week of gaming than to sit down with one of these burgers and gorge on it. With fries and a soft drink, of course.

In Other News: Destiny strikes are on strike until next week, Grandia gets a grand HDing for PC, how Nintendo came up with their iconic box art and explaining Adventure Time.

Here’s the news that we didn’t post today, because we were too busy drooling on our keyboards.

This teaser trailer for HANNIBAL season 3 will leave you optimistic
This trailer for RIOT looks a riot of B-action, silliness, and Dolph Lundgren
Here’s the first trailer for the MINORITY REPORT TV series
Kevin Smith’s Mallrats sequel is titled MALLBRATS
Watch the trailers for NBC’s new series, including the Wesley Snipes led THE PLAYER!
This first trailer for LUCIFER is oddly immune to your charms
MAD MAX: FURY ROAD review round-up – “The most intense and bruising action ride of the year”

You don’t need to break the bank or get caught in order to spy on your spouse. There…