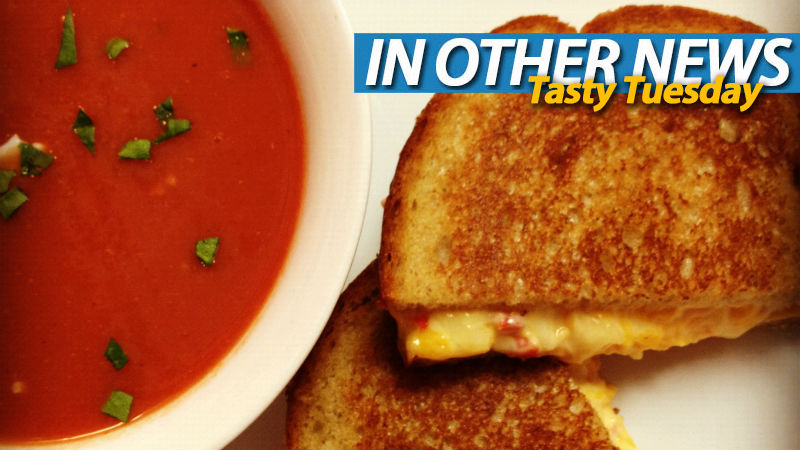 The sun is rising later and later and it can only mean one thing – winter is approaching. This means cold days bundled up under blankets, plenty of gaming and consumption of comfort food. I know there are tons of favorite winter meals – curries and stews and other joys. But this one makes me feel warm all the way to my heart: grilled cheese and tomato soup.

If you have a recipe passed down through the ages, your tomato soup is probably best. However, if you’re in a pinch and just need to grab some quick and easy soup for a cold day (and to freeze for emergencies), I can recommend the roasted tomato soup from Woolies. It really does taste fresh and delicious, just requiring a bit of pepper or fresh herbs to suit your preference.

As for the grilled cheese, you can certainly use your favorite artisan bread or special cheese, but the pairing of a simple cheddar or gouda with standard sliced bread actually works perfectly. This is meant to be comfort food and the exotic tastes of gruyere or camembert simply don’t belong. There is something so perfectly moreish and fulfilling about the crunch of the bread with the gooey cheese all dunked in that creamy soup to warm the heart, body and soul on a dreary winter day.

In Other News: Sony really needs to keep track of their trademarks, Bloodborne is doing really really well and Time’s list of important people doesn’t make me very happy.

Here’s the news we didn’t post today because SO CLOSE! Come on SPERTS!

Sony Hilariously Loses Bloodborne’s Trademark Just Before Release; They Forgot to Request an Extension
These are the top Call of Duty: Advanced Warfare weapons, according to the developer
H1Z1 sells more than one million copies on Steam
Halo 5: Guardians story trailer coming this weekend