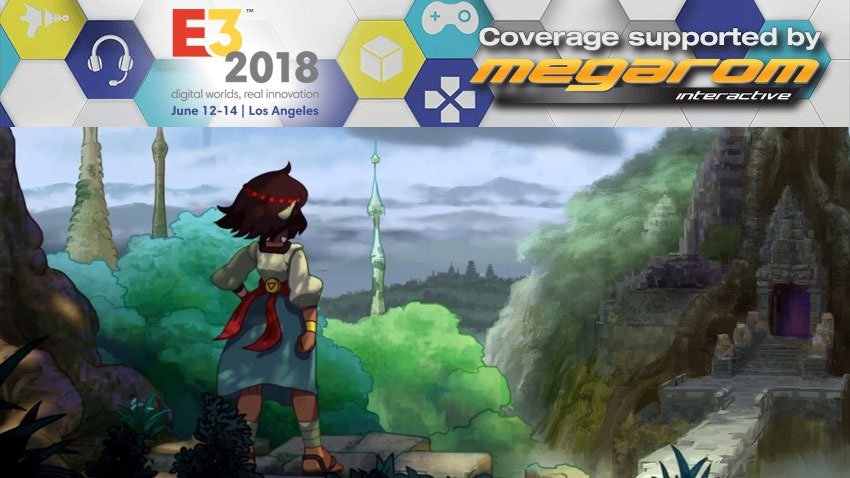 Indivisible is the successfully-funded Metroidvania RPG from Skullgirls developer Lab Zero. I had the opportunity to play it and left my hands-on sessions wanting to play the game a little more.

In it, you’ll mostly play as Ajna, a rebellious tomboy imbued with mysterious power. When a Warlord attacks her village, she discovers that she’s able to absorb some characters into her being, allowing her to summon them into battle. With the discovery of this power, she sets out to confront the warlords and travel through a variety of environs to find the true nature of her newfound powers.

Most of the game plays like a Metroidvania platformer, with gorgeous 2D art. If you’ve played Skullgirls, you’ll know exactly what sort of lush, hand-drawn visuals to expect. The art is lush, with characters and environments drawing influence for an array of cultures, including Arabian, Hindu, Chinese and other mythologies and histories.

When you attack an enemy though, the game shifts into an RPG battle system that’s reminiscent of an undervalued RPG from yesteryear: Valkyrie Profile. The three additional characters you have slotted join the battle, with each of them controlled by a different face button.

It’s semi turn-based, with your side attacking first (if you make the first hit during platforming), followed by enemy attacks. Each character has several action gems they expend on attacks, with them refilling during a cooldown. Blocking is done by holding down a character’s corresponding face button. By shifting the direction before attacking, they’ll dish out different attacks. It means using their specific attacks to create combos, which juggle enemies, as they might in a fighting game.

Your party has a shared resource bar that fills over time as well, with three levels. By using one of those levels, a character – or a group of them – can unleash special, ultra-powerful attacks. It means that combat I something that requires careful management, attacking and blocking at the right time to maximise output damage, while trying to keep from losing health yourself. It’s RPG combat with the soul of a fighting game, all wrapped up within a Metroidvania platformer.

The characters that Ajna can absorb into herself are unique and diverse, and with 25 of them to come in the full game, there’s bound to be filled with variety. It’s coming to PlayStation 4, Xbox One, Nintendo Switch, and PC next year.