Home Gaming Is this the new Nvidia Shield Tablet? 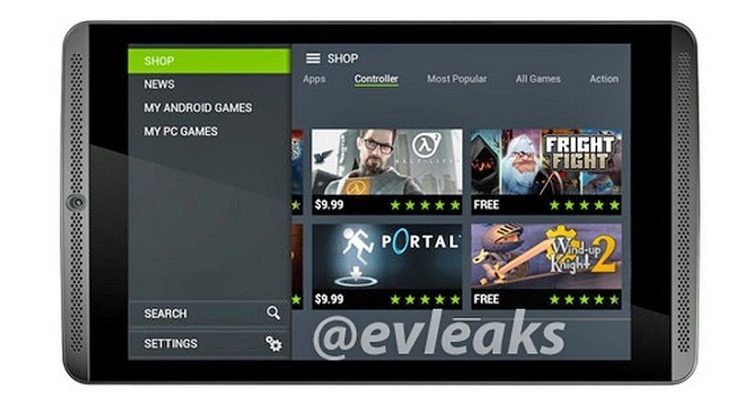 A few days ago there was a rumour that suggested the next iteration of Nvidia’s Shield would be an Android-powered tablet. That was followed by news of a possible streaming device being developed by Nvidia, that could play both PC and Android games. This render leaked today could be the embodiment of both those ideas, and our first look at Nvidia’s new Shield.

The image was leaked by gadget rumour website evleaks and is said to be a render of the device currently under production at Nvidia. The render suggests that the device will be capable of running PC and Android titles, which fits the description of earlier rumours.

The tablet could run Android titles independently with the rumoured Tegra K1 processor inside, while streaming PC titles from a Nvidia GPU nearby. An HDMI port on the tablet could then transform it into the “streaming console” that was rumoured to be in development earlier this week. It’s looking like this is the single device that all the rumours have alluded to.

The device could launch this year, with a reveal (and possible release) window of August. The tablet will need to be both affordable and compatible with a larger range of Nvidia GPU’s to be widely successful. The first Shield probably taught Nvidia a lot about shrinking their market before even releasing a product.

It looks interesting, but with Steam streaming turning any laptop into a device similar to this Nvidia needs to offer something unique. The tablet market is crowded, and a single gimmick won’t be enough to ensure success.