Assassin’s Creed Odyssey releases next Friday, 5 October, transplanting the mix of stealth, action and history that the Assassin’s Creed franchise is famous for, to a Classical Greek setting. Time will tell what the full game is like, but the preview we played felt like a satisfying refinement of the already-extensive gameplay overhaul central to last year’s Assassin’s Creed Origins.

The big deal about Odyssey – its big differentiator from Origins – is that it pushes the series into full-blown RPG territory for the first time. “The choices you make in Odyssey really and truly impact the story and the outcomes you will have,” as the game’s Senior Producer, and franchise veteran, Marc-Alexis Côté explained to us during this interview.

One of the biggest choices you’ll make right at the start of the game is whether you’ll play as Alexios or Kassandra, two siblings and descendants of legendary Spartan king Leonidas (he of the Battle of Thermopylae fame). While Alexios has dominated marketing material for Odyssey, evidently players are relishing the opportunity to play an entire main Assassin’s Creed game as a female character. According to this small Twitter poll, Kassandra is far ahead in the popularity stakes. (She – and not Alexios – is also the canon protagonist in the official novel adaptation of the game, for the record). 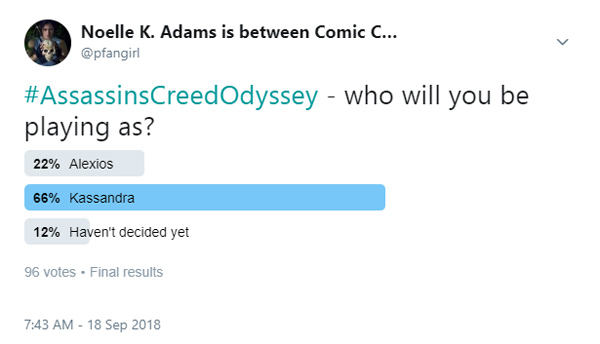 Having been hands-on with the game’s opening two acts, here are just some of the reasons you’ll likely find yourself as a card- (or spear-) carrying member of Team Kassandra very soon.

1) She’s physically strong
Continuing the year’s trend of “strong is sexy” for in-game heroines, Kassandra’s bicep action even puts Lara Croft’s arm game in Shadow of the Tomb Raider to shame. She’s seriously buff. In line with her profession as a mercenary, Kassandra is muscled, and heavily veined – although her physical definition is quickly obscured by the armour she acquires. This said, as with Assassin’s Creed Origins, you can toggle Kassandra’s hoods and helmets on and off, allowing you to enjoy their benefits without obscuring the heroine’s face.

2) She’s a tough, likeable survivor
Within seconds of meeting Kassandra, the player sees her take a punch to the nose from a fellow warrior-for-hire. A few seconds later, she’s put her rival, and his companions, on the ground. Kassandra is a heavily scarred survivor, but she’s not wrapped up in her trauma. Naturally a troublemaker, she has a short temper and a smart mouth – for better or worse –as well as a wicked sense of humour. This adds an extra layer of likeability to her character.

3) She’s your favourite heroines rolled into one
Arya Stark. Aloy. Xena. Maybe a tiny bit of Bean. These fan-favourite female protagonists from across the Pop Culture spectrum are all present in Kassandra’s character. The player meets Odyssey’s heroine (or anti-heroine?) as a world-weary, low-level mercenary trying to carve out a hand-to-mouth existence on her adopted home of Kephallonia. She’s an exile. An outcast. The fierce, rebellious daughter of a Spartan king, forced to flee by family tragedy that largely stemmed from her own impulsiveness. Alone in the world since childhood, she’s had to do many morally-dubious things to get by, and align herself with all kinds of morally-dubious people. Yet for all the fights, thievery and murder, there’s potential in her for world-changing greatness. 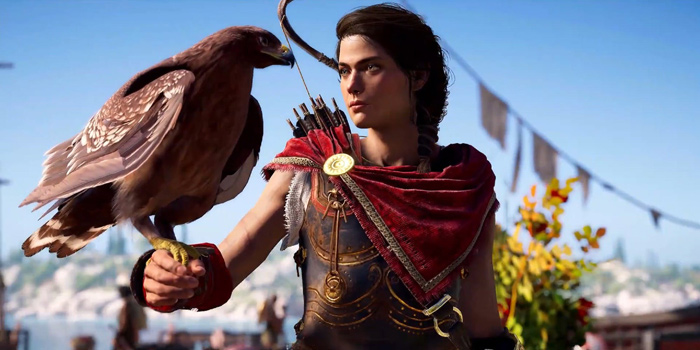 4) She’s a terrible flirt
This is more a matter of player’s choice, but it’s fun to take a character who is so badass and physically impressive, and make them so completely unimpressive in other areas of their life. In Assassin’s Creed Odyssey you can romance both men and women. If you want, you can play Kassandra as incredibly smooth-tongued – to the point of “pick-up line cheesy” – but it’s more entertaining to have her bungle the seduction at the last minute with some well-timed social ineptness.

5) She’s whatever you want her to be
Kassandra is certainly no empty-shell protagonist. Like other leads in the Assassin’s Creed franchise, her personality is well-defined from the outset. But Odyssey is an RPG, where “every choice defines you.” You may choose to keep Kassandra as entirely self-serving and profit-orientated. You could play her as a thuggish pirate, intimidating and murdering her way across the Aegean Sea. Or, you could play her softer, fighting against injustice and defending the powerless in society, Bayek-style. Alternatively, you could mix it up, treating some NPCs with tenderness and others with harshness, as the situation requires. Through 30 hours of interactive storytelling, you can set the tone of Kasandra’s interactions with others and chart her personal odyssey towards redemption and resolution. Or, you know, send her in the completely opposite direction. 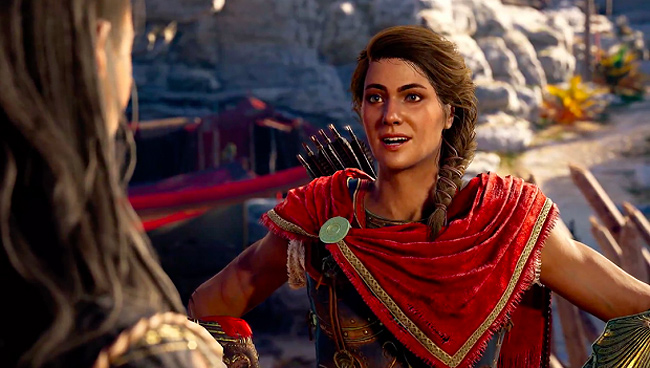 Chatting to developers and others involved in the release of Odyssey, Kassandra (voiced by Greek-Canadian actress Melissanthi Mahut) is apparently more enjoyable than Alexios to play from an animation and performance perspective.

Also, Assassin’s Creed Odyssey gives you the rare option to play as a Spartan woman. For the record, although the game obviously takes its liberties with history for entertainment purposes, Spartan women were the most liberated of the Ancient Greek world. While their Athenian counterparts – or at least the women of the upper classes – were veiled and cloistered away in the back rooms of homes, Spartan women of the privileged classes were educated and underwent stringent physical training. 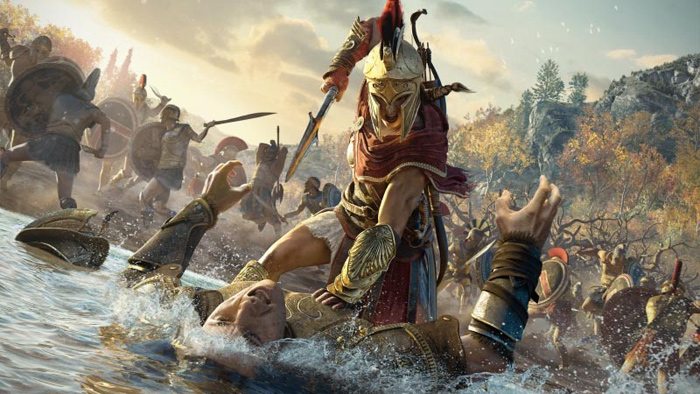 The argument is that this upbringing better prepared Spartan women to be strong, disciplined mothers of Spartan sons. However, it did also aid them in running Spartan society when the men were (frequently) away at war. Spartan women could also more easily fraternise with men, manage family property and assets, and shunned makeup and other feminine adornments as practicality was prioritised in their military-styled society. So no arguments that Kassandra is unrealistic. In principle, she reflects the greater liberation of Spartan women during the period.