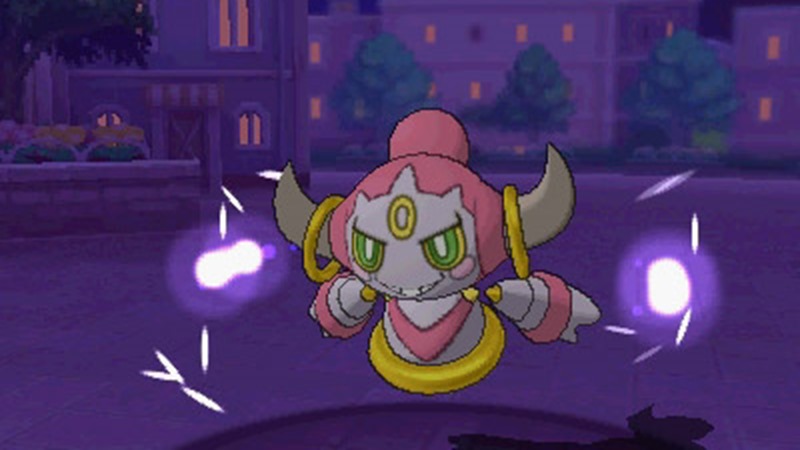 Hoopa. It’s the name of a Pokémon that has been around since Pokémon X and Y, but has yet to be released. Unless you hacked the game that is. A legendary Pokémon, Hoopa is also linked to the recent influx of other legendary pocket monsters in the recent release of Omega Ruby and Alpha Sapphire. And it looks like Nintendo is finally unleashing their latest Pokémon officially.

The first Psychic/Ghost-type ever made for the game, Hoopa is categorised as the Mischief Pokémon and comes with the Magician ability. Here’s the official trailer and description from Nintendo:

Hoopa is a Mythical Pokémon in the world of Pokémon Omega Ruby and Pokémon Alpha Sapphire that cannot be encountered through regular gameplay! The Pokémon is recognizable by its two horns and the golden ring that adorns its trunk. Hoopa’s rings are said to have the power to bend dimensions and move objects across great distances.

There’s no info yet on how the Pokémon will be made available, but it’ll most likely be through a distribution event. Or through the wi-fi I’m hoping, since the local branch of Nintendo regularly skips PE on these events. Sob. With Hoopa now official, and Diancie having been released last year, there’s only one more mystery Pokémon left that hackers uncovered last year: Volcanion. But I’m digging Hoopa more right now, because the imp happens to have an alternative form as well.

As hackers discovered, Hoopa can also become Hoopa Unbound, a more menacing form that most likely has a tie to the Mega Evolution/Primal Regression. According to reports, players can unlock this form by visiting a Pokémon Mart and finding a new employee in the corner, who will tell you a scary story about how the shop was suckered into buying useless junk.

The employee will then give the player a “Prison Bottle”, which will allow Hoopa to assume a stronger form. The Prison Bottle itself is described as “a bottle believed to have been used to seal away the power of a certain Pokémon long, long ago,” which is most likely due to the fact that Hoopa can use a move called Hyperspace Fury. It’s a move that has Hoopa throw out various discs that happen to bare a striking resemblance to the portals wherein legendary Pokémon are encountered in the game.