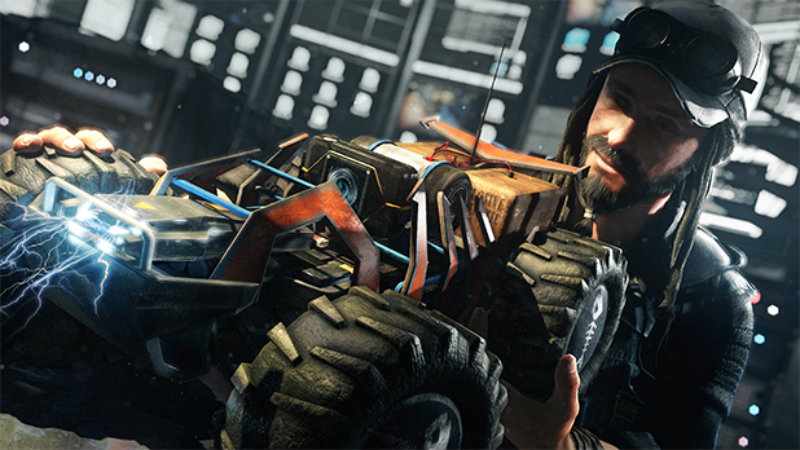 The first Watch Dogs story DLC is coming and it’s called Bad Blood. In it, you get to play as a much more interesting character than Aiden: T-Bone. I’m sure Geoff is still sad that you don’t get to play as Jordi, but T-Bone has an awesome extra.

According to scriptwriter Ethan Petty, they chose T-Bone because he can hack, drive and shoot like Aiden, but also has other things to offer:

T-Bone is an old-school hacker and engineer heavily linked to ctOS. He’s got a rebel spirit and can take care of himself in a fight. He has an unexplored backstory that gives him a solid reason to fight. And he represents the ‘maker culture’ of hacking, which brings new machines and gadgets to our game.

This opens things up for the coolest thing – T-Bone has a remote-controlled Eugene, a mini-car (RC car) that can hack and get upgraded to include stun guns or bombs. It sounds like a tiny version of the Batmobile for Watch Dogs, and is seriously cool. Additionally, Bad Blood sees the introduction of armed security cameras – essentially security cameras with guns attached to them. Hacking these can allow players to fire on enemies without their having any idea where the shots are coming from.

Bad Blood offers up some new environments and multiplayer modes, too. Here’s the launch trailer for those who like to watch these things:

I still need to finish Watch Dogs. This DLC sounds like a whole bunch more fun – the biggest downfall of the game is Aiden’s wet dishtowel personality, and this should help that a lot. I think the RC car will be more interesting than him. Still, I’d love to see a bigger role for Jordi – c’mon Ubisoft, don’t you want to add diversity? That said, I’d love a Watch Dogs DLC that eliminates the shooting options, just to see if a pure hacking game could still get people excited.