On Saturday, I went to Old Eds in Joburg to report on the Mind Sports South Africa (MSSA) press conference – an opportunity to meet Simphiwe Maphumulo, as well as get answers to all those questions we raised a couple weeks ago. Unfortunately, the afternoon just proved to me how ill-fitting and poorly managed the MSSA truly is.

Before I give you my reporting and interpretation, I want you all to have an opportunity to see what happened for yourselves. Matthew “fluKe” Merks, owner of PolarfluKe, managed to video record much of the conference – the camera cut out after a while, but gives a fair indication of what we saw at the event – plus the full audio. There was a ridiculously short statement, followed by an extensive Q&A.

Or, you can read through what those present tweeted during the event:

Simphiwe Maphumulo is an ineffectual president

Simphiwe Maphumulo doesn’t know about eSports. Now, this may seem like a fairly arbitrary statement – I don’t know about Morabaraba, which is his mind sport. However, as president of the MSSA, it is extremely concerning that Maphumulo doesn’t have any idea about historical dealings the federation has had, nor does he have any ideas about the future of eSports. Furthermore, he was utterly unprepared for the press conference.

As some of you may remember, when the initial Q&A was opened up over on Mweb, that article received over 400 comments, concluding with Maphumulo telling gamers that they could “take a hike”. This press conference was meant to fix that poor communication, to give Maphumulo an opportunity to answer questions properly and prove that he’s an approachable figure, someone who will push the MSSA in the right direction. Unfortunately, he did exactly the opposite.

Maphumulo was completely unprepared. His initial statement was no more than a sentence or two, giving no real direction or agenda for the press conference. Nor did it show any acknowledgement of the major concerns gamers put forward. Furthermore, he was almost completely unable to answer any questions, deferring to the former president to the point that it became pointless to actually direct any questions at him. When we asked how long he thought it would take to get up to speed, he explained that he was very busy with work and studies, and thought that it would take about a year before he knew everything that he would need. That’s right, the president of the MSSA will need an entire year before he knows what’s going on.

As a result, despite claims that his role is that of “General Secretary”, we have no choice but to conclude that the former president, Colin Webster, is still very much in charge of the MSSA.

At the start of the press conference, we asked where the eSports representative for the MSSA was. We wondered why that person wasn’t present at the event, and what their contact details were for future press interactions. Instead, we were told that when Simphiwe Maphumulo was unavailable, we could contact the General Secretary (Colin Webster) or Carl Holliday, the MSSA’s legal representative. We were told there was no eSports representative, as positions are on a volunteer basis and it was hard to find willing people for all the different roles. Okay, this is unfortunate, but it could maybe be understood (except for why the press should contact the legal representative for answers about eSports). However, towards the end of the press conference, when Maphumulo was asked if he was interested in establishing an eSports council to advise him on the major issues, he informed us that there was, in fact, an eSports representative. Caught in a lie, Maphumulo and Webster simply went silent. 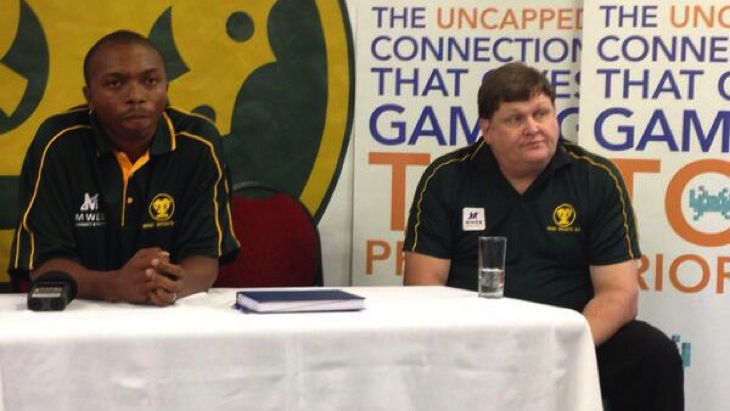 When pressed on poor attendance at events, we were given the double excuse – most of the affiliated gamers come from disadvantaged backgrounds so they can’t travel to events, plus we don’t know about all the events that take place. Really? I wonder if that doesn’t relate to the early questions about a lack of PR and eSports representation by the MSSA. Additionally, if they suffer with such low turnout for these reasons, why aren’t the DGL and Orena plagued with similar problems?

The other excuse used by Webster throughout the press conference was that it was the legislation that caused most of the problems gamers complained about. Whether internal MSSA rules, national laws, international federation requirements, or even individual club decisions, the policy seemed to be to pass the buck and take zero responsibility. When asked if perhaps the MSSA should stop fighting against the gamers and maybe work to change those rules that are preventing the growth of eSports, they replied that they didn’t believe they were butting heads with gamers, but rather that this was all part of the service they offered.

It’s clear that they see things very differently to everyone else. When pressed on the PR release about earning a silver medal at the StarCraft II women’s event, Webster did not see a problem with the fact that they omitted the reality of the situation, which was that there were only two competitors. Does coming second of two mean that you actually come last? No, he doesn’t see it that way.

I could go on and on about the incompetence and plain-faced lying that took place on Saturday, but that would take all day and most of you wouldn’t read it. I was outraged, ranting to Alessandro Barbosa of EGMR about how awful the event was. However, he was one of the only people I could rant to – a total of three journalists (including myself) and two eSports advocates turned up at Old Eds. Yes, that’s it.

The ongoing issues with the MSSA are clearly important to gamers in the country – you wouldn’t have written so many comments on the relevant articles if it weren’t. However, Mweb didn’t even send their original reporter for this topic. Despite being the sole sponsor of the MSSA, Mweb sent only one journalist – but at least they sent someone to cover the press conference, which is more than can be said for other leading publications.

I understand that invitations were not sent out properly, and perhaps some people weren’t informed of the event – this is a general problem that plagues the MSSA. That said, I wasn’t actually invited to the press conference – I only knew about it because of an open invitation online. So what is the excuse? It’s bad enough that the MSSA doesn’t take their job as national eSports federation seriously – how can we hold them accountable when journalists can’t even be bothered to attend and ask the hard questions?

In summary, the MSSA is just as broken as we believed it to be. Maphumula is not a breath of fresh air, but rather an ineffectual president who – as far as eSports within the MSSA is concerned – appears to be little more than a puppet for the previous president. eSports does not have quality representation on a national or provincial level – the MSSA is unable and unwilling to help gamers overcome obstacles, becoming another impediment themselves. But we are unlikely to see any of this change as those who could make noise and try to change this seem just as apathetic.

Saturday was a sad day for me. Not only did I realize how poorly gamers are represented by the MSSA and how defunct it is as a federation, I also came to terms with how poorly local eSports gamers are represented in general. While I do my best to report on all the local eSports news, it is clear that most of the media is apathetic when it comes to the MSSA. As a result, it will take dramatic change to fix local eSports, a change that is unlikely to come anytime soon.