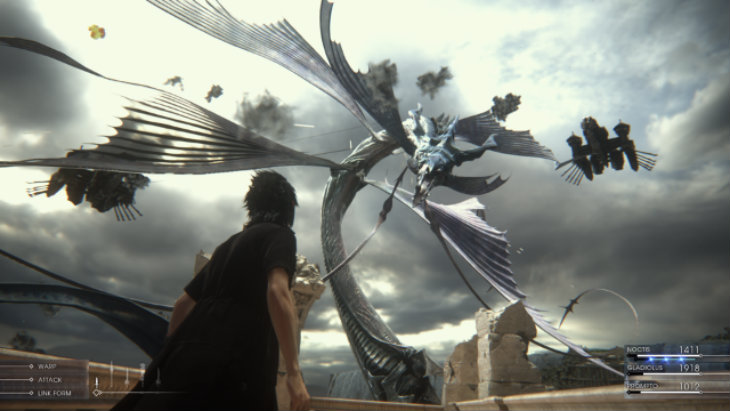 Final Fantasy XIII was quite a divisive entry in the franchise. The Marmite of JRPGs, fans either loved or hated it. Now details are coming out on Final Fantasy XV, and this may just be the game that fans have been waiting for.

Unfortunately, I’m not fluent in Japanese, so I have to rely on the details translated by the cunning linguists at DualShockers. The Xbox One’s Japanese website explains that, taking advantage of new generation consoles’ specs, characters can move freely across the whole screen. The party battle system is more advanced, allowing players to switch characters “more strategically”. However, over on the PS4 page, there’s a different (and complementary) description of the game’s mechanics:

The battles featured in Final Fantasy XV have evolved greatly from the previous games of the series, as it’s created as an action game. The game switches seamlessly from the field to battle and the combat situation evolves rapidly. It goes on quickly with a sense of full realism.

Also, it’s possible to fight not only with the hero Noctis, but also to switch with other characters. Furthermore, it’s also possible to perform a combination attack with a companion while enjoying the dynamic effect.

Noctis can fight by making use of a variety of weapons and can move quickly within the areas by attacking enemies with stylish action!

You can fight monsters by cooperating with an ally. The ability to fight in collaboration with unique companions is an important feature of this game.

Each Final Fantasy game has featured a new combat system. Even Final Fantasy XIII used different combat in each installment of the trilogy. I’m curious to see what is meant by the battle system “created as an action game” – will it be more hack and slash this time around? Perhaps some Diablo influences getting into the JRPG? It remains to be seen, but it will ge interesting to see what strange and new experience Square Enix is creating for this beloved franchise.