Home Gaming New IP to be announced by Epic, will this hurt Gears of War 3?

Cliff Bleszinski has been on a whirlwind tour of the media in the US and has been happy to tell everyone how excited he is about a new IP that Epic will be revealing in early 2011, more than likely at GDC in late February.

Apparently the new IP was originally envisaged by Cliff himself but after bringing on the lead designer of Prototype, Eric Holmes the IP has veered off more into Holmes’ territory with Cliff taking a back seat.

Now I’m all for new IP’s but I am also a Gears fanboy and the thought of Cliff Bleszinski giving less attention to Gears and more to Bulletstorm, (New IP), Shadow Complex etc makes me a little worried.

Gears 1 was awesome but they fumbled the ball a bit on the sequel, they still have time to recover and bring Gears 3 home with a win but if they spread themselves to thin I am worried they will drop the ball entirely and be sent packing.

The boys are back in town! Rick and Morty S4.5 finally gets a release date and trailer

No, this is not an April Fool's Day prank! (We hope) Adult Swim has finally revealed the r… 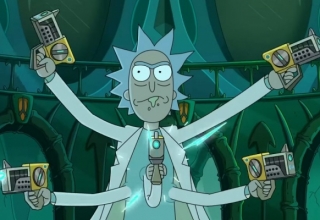 No, this is not an April Fool's Day prank! (We hope) Adult Swim has finally revealed the release date for the final five episodes of Rick and Morty season 4 with a crazy new trailer!