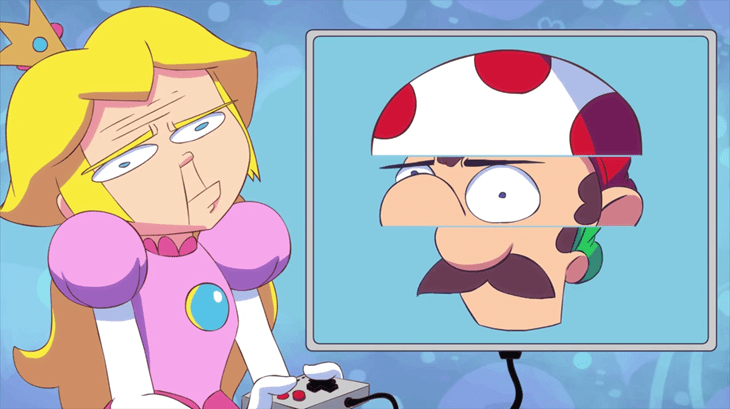 Another month, another Nintendo Direct! I love these announcements from the Japanese developer, as they’re down to earth and happen to be all about the games. The first Nintendo Direct of 2014 kicked off last night. Here’s what Iwata and pals had to show the world.

Clear the track, because a whole new set of wheels have just landed. Pulling a Will Smith, Bowser has thrown his entire brood into the game, as Mario Kart 8 will allow players to drive as either Iggy, Larry, Lemmy, Ludwig, Morton, Roy or Wendy.

Mario Kart 8 is still racing towards a May 30 release date.

The one-time Mario nemesis and heavily muscled gym-kallping primate returns to gaming this year, in Donkey Kong: Tropical Freeze. To do monkey stuff. I think.

A new challenger appears! Little Mac, the small pugilist who faced off against Piston Honda and Mike Tyson in the Punch Out games, will be slugging it out in the new Super Smash Bros later this year.

The hair magic witch is almost here, with 2014 marking her Nintendo debut. To celebrate, Nintendo showed off a new trailer of the Platinum Games developed title.

There’s no official name yet for this game, but Nintendo did show off new footage of the title, that will have a battle system that is based on the one used for Xenoblade Chronicles.

The Wii U Virtual Console is getting a ton of retro love in the near future, with games such as Metroid Fusion, Mario & Luigi: Superstar Saga and Yoshi’s Island: Super Mario Advance 3 on the way. More games will be released monthly.

The Ubisoft RPG hits the Nintendo eShop on April 30, and the gorgeous fight starring Princess Aurora will cost players $14.99.

Based on one of the NES Remix stages, Super Luigi Bros spins off into a full game that contains all the levels of the original Super Mario Bros, but with Luigi in the lead role. The game also takes a left turn, by making players go through all those original stages by playing them from the opposite running direction. Zoolander beware.

More mash-ups of classic games are on the way, as Super Mario Bros 3, Kirby’s Adventure and Metroid get reimagined with all new challenges and modified stages.

Yoshi got to take the spotlight during the Nintendo Direct presentation, as the little dinosaur threw around Mega and Metal Eggdozers in his game. Yoshi can now also transform into various items such as a submarine or a jackhammer, with the Nintendo 3DS gyro controls manipulating that gameplay.

Yoshi also gets a taste of invincibility, as a new star will transform the little fella into Super Yoshi when its activated. That game arrives on March 14 for the 3DS.

A new mode was announced for this golfing game. Castle Club gives players a training ground that allows them to further hone their skills, while Mii characters can be customised with new items from the in-game shop. Mario Golf: World Tour is scheduled for launch on May 2.

Kirby will now have more than just some enemies to deal with in his next game. Kirby: Triple Deluxe also sports plenty of collectibles for players to find, with the 3DS StreetPass feature being used to give players better items whenever they get social with other players. That game will also launch on May 2.

The massive Capcom RPG is getting a western port, and will arrive with bonus content in early 2015.