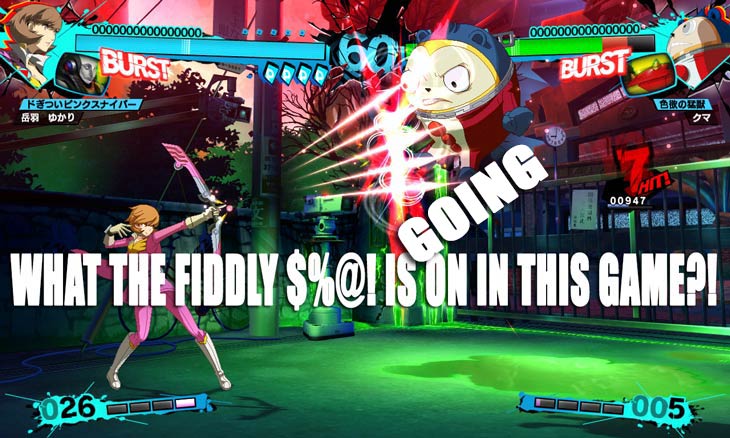 When you think fighting games, you think Mortal Kombat, Street Fighter and Tekken. Thing is, there are a ton of other great games in that genre, just waiting to be explored. Such as Persona 4 Arena Ultimax. Which might be the looniest game around in the fisticuffs market.

Here’s the first trailer for Elizabeth.

If you’re wondering just what the hell she’s saying, here’s a handy translation of some of her quotes from Anime News Network, which makes even less sense, if that’s possible:

Without being hesitant, I shall desperately interrupt!

I have a premonition for a riot to occur. To erode this world this much… It’s quite intriguing.

Unfortunately, I have a lovely personality that makes me unable to hold back my curiosity toward such things. That power… I would love to take a look at it.

The “solitude” and “bonds” that will begin now, and a battle between two great powers…

Elizabeth the secretary can’t help but let her heart dance!

An invader, or in other words, an irregular existence… Here I come. Draw: Persona card.

It appears that I must get rid of these pseudo-Persona-users that are hanging around. All I must do is judge them with my eyes. I shall go higher as an even stronger being!
Now then, a song of victory…

Only in Japan. Here’s the second trailer then, for the huggable Kuma:

I crap thee not, this is what he actually says in his trailer:

Wait just a second! Stop fighting for the sake of Kuma! Achoo!

Circumstances? I can feel those fresh circumstances right around here!

Good morning! Oh, am I all alone with Ai-chan? Could this be a premonition of love? All right!

Oh, execution! Kuma has an experience with one or two of those!

Leave this to Kuma! Kuma can use a Persona, and I’m the best of the bears at escorting the beautiful ladies! It’s hard being popular!

His empty space eats up everything! The lustful beast of libido! Kuma!

The world where everyone I love so much is always sparkling! That’s why I want to protect that sparkling, and help everyone! Let’s run straight ahead to that tower! Time to fly!

Now, a kiss of reuniting~

I’ll show you the dark fate of fools…

Persona 4 Ultimax ships at the end of September, because why the hell not. The game uses that delicious Arc System Works fighting engine, which has powered various other Japanese games where the characters have a case of side mouth and lizard nose. It should hopefully be available locally.