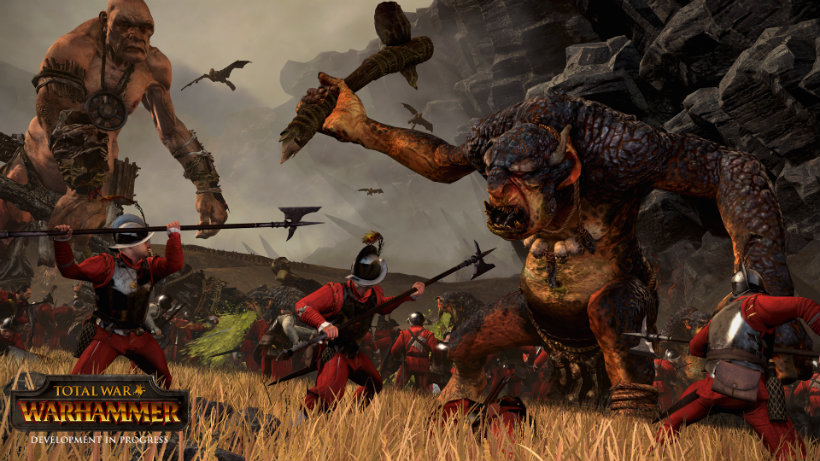 Total War: Warhammer has released an in-engine cinematic trailer, and it looks incredible. However, what I like so much is that they also released and explanation of what terms like “in-engine” vs “gameplay” mean. So, let’s have a look at the prettiness, and then realize what we’re actually looking at.

I don’t even want to play as the Empire; I’m more a Greenskins kinda girl. Still, even without having an affinity for the faction, I’m blown away by the trailer. All the models are so details and gorgeous, and those animations are incredible. The trailer is based on The Battle of Black Fire Pass, which was what formed the basis for the E3 demo. You’ll be able to see what I saw during a developer walkthrough at the end of the month, but even just this trailer looks incredible.

So, what does “in-engine cinematic” really mean? According to the explanation, the video uses in-game assets and code as a basis for a video which is then shot with cinematic camera techniques. While it’s representative of the general look and feel of the game, it’s not the kind of in-game experience you can expect.

Once we’ve storyboarded and written a script for a cinematic trailer, we set to work with our in-house cinematics tool (It’s called CINDY if you’re interested). This enables us to set up environments, units, models, terrain, and create custom camera paths directly within the game engine. Today’s Karl Franz trailer, for example, was set up in the Black Fire Pass battle map you’ll see in-game.

The cinematics team often ask our team of animators to make some custom animations for these trailers, chiefly for when a main character is gesturing and gesticulating. These aren’t generally made for the game but they help us to explain what’s going on and are often also used for in-game cutscenes. This being so, Total War: Warhammer offers an embarrassment of riches. Our animators have gone to town on hand-crafting spectacular combat-anims for many monsters and beasts in the game – the kind of stuff you just can’t get in the mocap studio. In today’s Karl Franz trailer for example, you’ll see a giant snatch up a soldier and smash him repeatedly into the ground. This is just one of a variety of attack animations you see the giants perform in battle.

When we render the final video out, we add some post-processing cinematic effects such as enhanced depth of field and motion blur. Not features you’ll see in the game, but in these cinematic trailers we’re trying to create atmosphere and tell a story. These techniques help us do that.

Are you ready to release the dogs of WAAAAAAAGH?