The PlayStation 4 and Xbox One versions of Rayman Legends are only days away. With the announcement that the PS4 version will support Remote Play using the PlayStation Vita, many thought that this could be the final nail in the coffin of the Wii U, rendering Nintendo’s Gamepad controller no longer unique. However, a post on the PlayStation Blog confirms that the Vita will not function as a controller for a co-op partner like the Wii U Gamepad does. Thus, the Wii U is likely to continue to house the best version of the outstanding platformer. 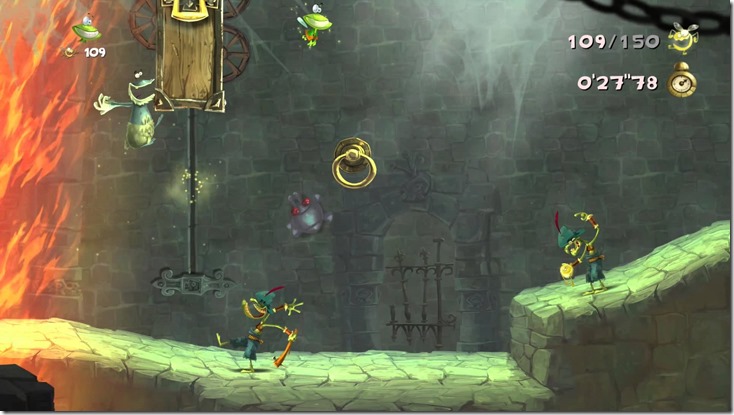 The popular Murfy levels in Rayman Legends are great for co-op play on the Wii U. One player uses the touchscreen on the Gamepad to direct Murfy to alter areas of the level, allowing another player using a Wiimote to control a classic character to advance. Hopes that PS4 players could use the Vita in a similar manner were dashed with this quote from the blog post:

… you cannot control Murfy in touch mode on the PS Vita, because even in Remote Play mode you will continue to play the same version of the game when you use the PS4 joystick. The Murfy levels on PS4 have been designed to be played with a classic character, such as Rayman or Globox, for example.

That’s not to say that there are no new features on the PS4 version. The blog goes on to state that the player can use the touchpad of the DualShock 4 controller in the new Camera Mode, allowing customization of screenshots for sharing purposes. The touchpad can also be used to scratch Lucky Tickets earned during gameplay. In addition, the visuals are tweaked to allow for greater fidelity on the higher-powered console, and load times when entering or exiting a level are eliminated.

Rayman Legends is an excellent game regardless of platform. Still, this news regarding the PlayStation 4 version exposes aesthetic improvements but functional disadvantages when compared to the Wii U version. Nintendo may have lost out on the initially planned exclusivity, but their console will still own the definitive version — and the Wii U’s unique Gamepad hook is safe for now.

The PlayStation 4 and Xbox One versions of Rayman Legends are set to release on February 18th. The Wii U, PlayStation 3, PlayStation Vita, and Xbox 360 versions were released in September of 2013.