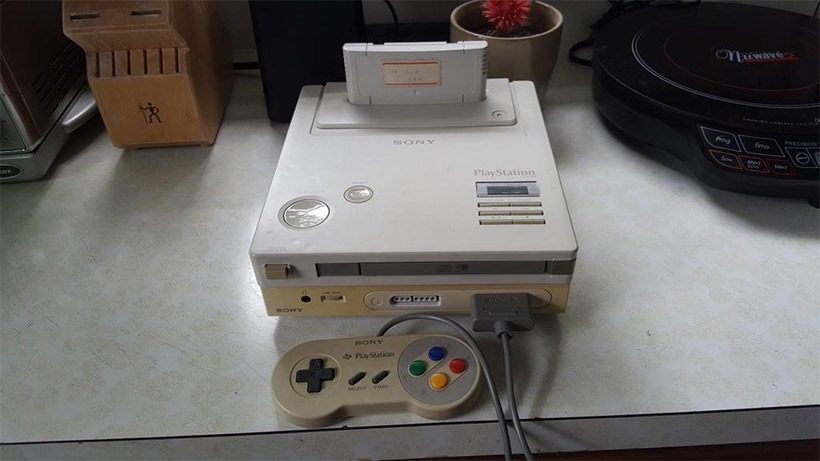 We’ve told you before that Sony’s PlayStation was borne out of a failed partnership with Nintendo. It was meant to be a device that added CD-Rom to Nintendo’s popular 16 bit machine, but the project was cancelled at the 11th hour.

As we said then:

“Nintendo was looking for a way to improve its 16-bit SNES console – and partnered with Sony to develop a CD-based add-on. It would have allowed that console to have more fully featured games, with FMV. Unfortunately after years of development, licencing disagreements ensued and Nintendo shocked the world by partnering with Phillips instead (resulting in some terrible Phillips CDi games based on Nintendo properties), just a day after Sony showed off its standalone SNES CD system at CES.”

There were apparently just 200 units made, but all were ordered to be destroyed. We weren’t sure that any still existed. One has apparently been found (via IB Times) . Feast your eyes on gaming history:

A possibly working prototype of the machine has been found, with its owner claiming that his father used to work with a company that worked with Nintendo (which sounds like nonsense, to be frank). When ordered to destroy the system, he kept it instead. It’s either a bloody good fake, or one of the most valuable relics in gaming history.

The console is complete; with controllers, an unmarked cartridge and an unmarked CD. While he hasn’t the power supply, the owners says he’s trying to source on to see if the console still works – and it would be great to see what treasures await on the media.

This is the failure that led to the PlayStation, and the rest really is history.