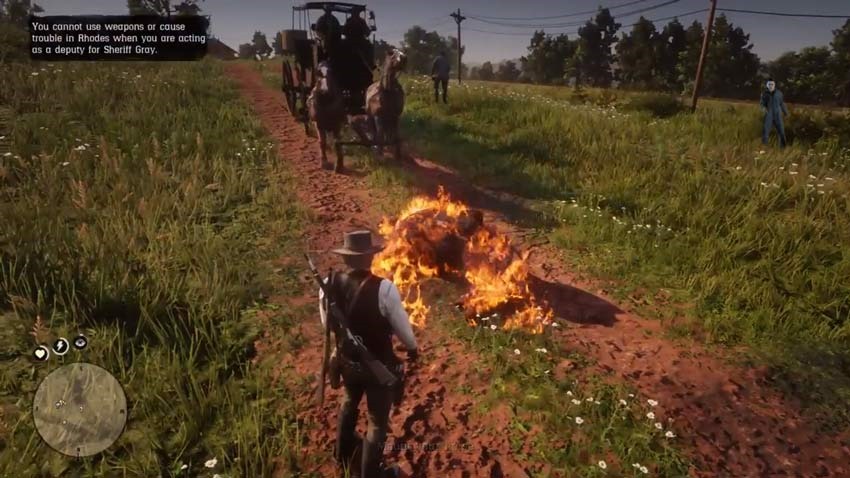 You’re riding out on the range, plying your trade as whatever kind of cowboy you want to be in Red Dead Redemption 2. Want to be a gun for hire who assists the law? Done, go grab a bounty poster. Want to don a black hat and rob a stagecoach instead? Hey, that’s an option! Just don’t forget to hide your identity. Point is, no matter where you go in Red Dead Redemption 2, you’re going to need a horse.

A trusty steed, who represents many things within Rockstar’s sandbox sequel: Trust, reliability and a tendency to spontaneously combust if the right conditions are met. Wait what?

Yup, as technically polished as Red Dead Redemption 2 is thanks to its overworked staff, that doesn’t mean that the game doesn’t have any bugs inside of it. Ambitious as can be, thousands upon thousands of cogs in the game can operate perfectly in one instance and spectacularly cock up in an unintended manner the second you take your eyes off the screen.

Here’s one example, as recent reports across social media have revealed a section near Rhodes where horses just catch aflame for no reason whatsoever:

Mind you, I’ve tried triggering this glitch myself, and the game has yet to oblige me with a field full of burning horses. I guess you could say that Red Dead Redemption 2 is saying neigh to my sick desire to see a French barbeque. My best guess is that the glitch is related to one of the events that happens in the game, when players are ambushed by a few Civil War holdouts shortly after they arrive in Rhodes. That particular scene features an explosion right on that very spot, so some trigger must have gone haywire for the affected players.

One glitch that does work however? An easy method for making lots of cash, fast. Which is why I’m swimming in six-shooters and fancy hats right now.