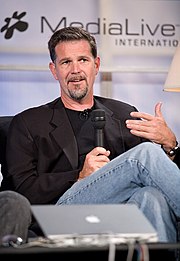 If you are sitting there saying WTF is Reed Hastings then don’t feel bad, he hasn’t made an impact on South Africans… yet.

He invented/founded Netflix which is an online video rental service. Being that he did this in the states he became an instant millionaire obviously. It seems like anyone who invents something in the states becomes a millionaire. Anyway back onto the topic.

Microsoft have not announced why Reed has been put on their board but the obvious link between Xbox Live! and renting movies seems to be logical. Especially with the new Xbox 360 Elite with it’s 120Gb HDD now confirmed.

How long before we start renting normal and HD movies straight off the net?

Yeah I realise it will kill our bandwidth but you never know, we might get a local Live! server with uncapped bandwidth one day…