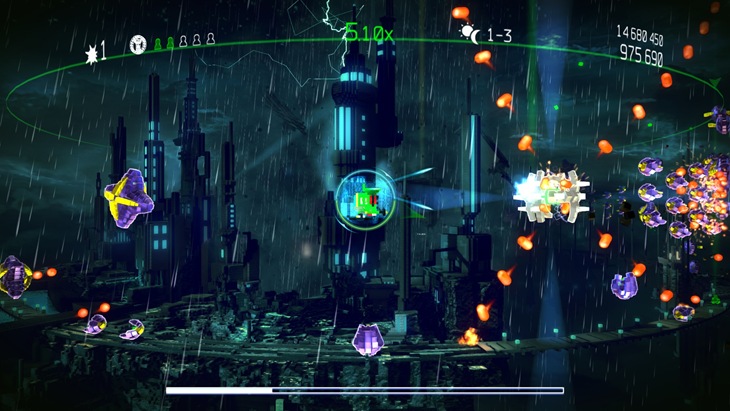 Six months after I bought a PlayStation 4, and I’m still playing Resogun. It’s a game which just may be one of the very best launche titles ever. And it’s getting a DLC upgrade right about now.

Update your copy of Resogun, and you’ll find a new ship editor tool as well as various other gameplay enhancements and tweaks. But the real story here is the upcoming DLC. The PS Blog detailed the new content. Here’s the lowdown on what $4.99 will get you.

Survival mode is Resogun turned up to 11. In this new mode you’ll descend onto Avernus with the sole purpose of taking the fight to Sentients. Attack the stormy city in the midst of an all-new day and night cycle, and destroy everything that moves.

Things are tough in Survival – you only have a single life to last as long as you can. A few things have changed to improve your odds, however.
The Humans you saved are back, and they’re ready to help you power up. Parachuting into the level frequently, they can be immediately collected to power up your weapons and give you the edge with several power ups including an improved shield, Clock (turbo speed), overcharged weapons and much more. Add those to your boost, overdrive and guns, and you’re a true force to be reckoned with.

At its heart, Survival is a true high score chase. We’ve improved the leaderboards and post-game feedback you can expect to see when you die (and die you will). We also have a couple cool additions to keep you pushing forward against your enemies. 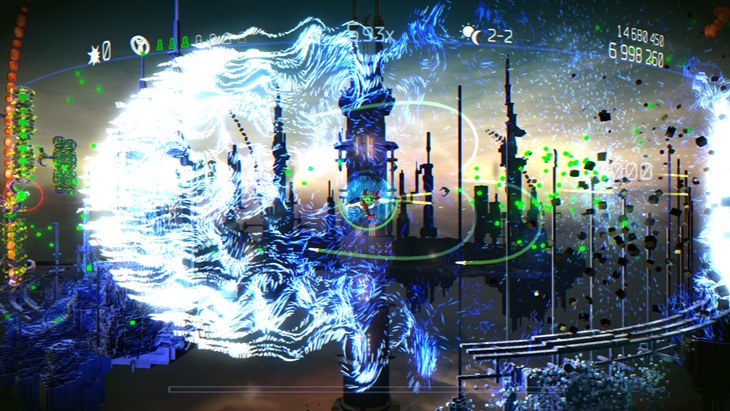 These are holograms of your ship placed on a timeline representing your best performance to date. Do better and the fallen hero will activate and, if collected will improve your shield and weapons to aid your survival.

Nothing pushes you like beating your friends! In Survival we place Monuments representing your friends’ (or global) scores around you. Beat the score to destroy the monument as you move up the leaderboards to glory.
Survival is pure Resogun through and through, and we can’t wait to see your scores. 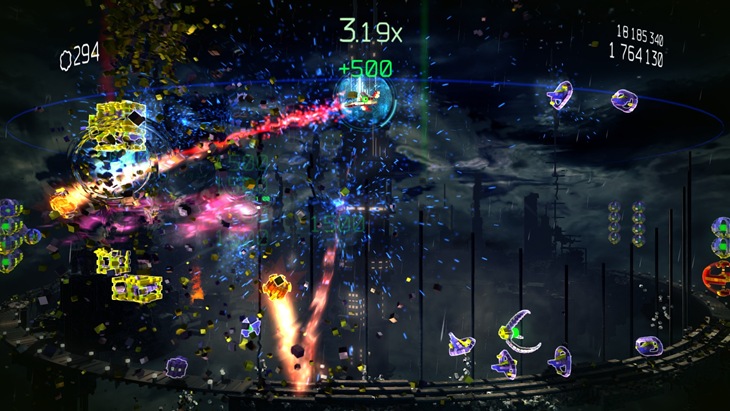 Say hello to the “Wrecking Ball,” and your new favorite game mode.

In Demolition, you take the fight to Avernus at night, armed only with a proximity bomb that recharges after each use. No other weapons, boost or overdrive here. What you do have is the Wrecking Ball. When it’s caught in the explosion of your proximity bomb, it will fly off around Avernus destroying everything it hits… including you!

This new game mode is Resogun meets Arkanoid with a touch of Pinball, and it has to be seen to be believed.

We’re going to honor your fight in Avernus with the addition of yet more sweet Trophies to the game. This pack will push you to the limits with specific challenges across Survival and Demolition mode. We’ll be back with a Trophy guide very soon.

And yes, I have seen quite a few penis-ships so far thanks to that new ship editor. I’d make one myself, but I don’t know dick.