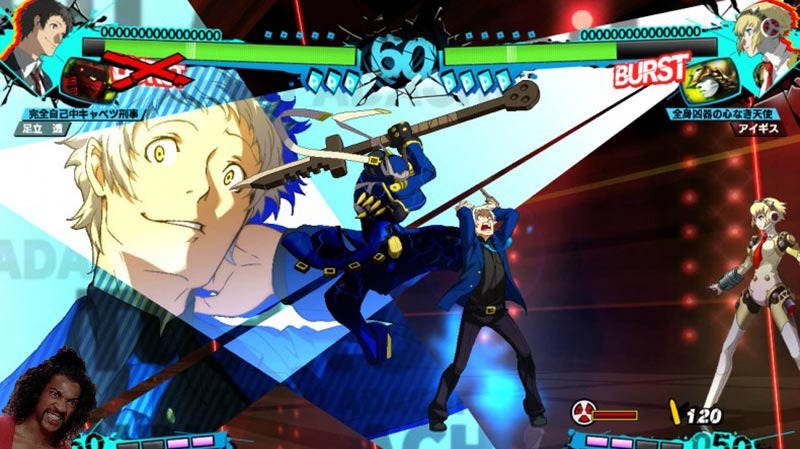 It is a damn good time to be a fan of not only fighting games, but anime-styled brawlers as well. A new Dragon Ball game is on the way, Guilty Gear Xrd SIGN launches soon and of course there also happens to be Persona 4 Arena Ultimax. “But Darryn,” I hear you ask me as I rouse from my slumber and wonder how all these drool marks got on my life-size Hatsune Miku pillow-doll which I totally don’t cuddle with at night, “What’s a Persona 4 Arena Ultimax?” Well kids, buckle up,because class is in session.

Of course, there are plenty of characters to choose from in the game, and perform outrageous stunts with. Here’s a look at who’s arriving to put some boot to ass. First up, you’ve got Adachi. Described on the Persona wiki as a “cheerful and jovial detective, Adachi often serves as the story’s comic relief”. Which sounds all fine and dandy until you realise that this is all a front, as he happens to also be a sadistic murderer who enjoys playing a dangerous game with his victims. So uh, don’t put him on the office Christmas list then. Here’s his trailer:

Next up is Marie, who first appeared back in Persona Golden. Despite the cute looks, she also happens to be “cranky, sarcastic, irritable, very foul-mouthed and often prone to mood swings”. But she has a heart of gold I reckon, and this has nothing to do with the fact that she attempted a relationship with me in Golden/my fan-fiction.

And the last character for today is Aigis, an android lady who was intially rather plain and only existed to follow orders, before she got an upgrade that allowed her personality to develop further and turn her into a “sweet, gentle, empathetic and strong-hearted young woman with a talent for leadership.” Awwww. Also, she’s still awesome at kicking ass:

Remember, Adachi and Marie will be DLC characters available for the game after launch. For free, which is kind of rad. Persona 4 Arena Ultimax is out at the end of the month, in case you’re aching for some good ol’ fashioned fast-paced 2D fighting action. It’ll be duking it out on PlayStation 3 and Xbox 360.