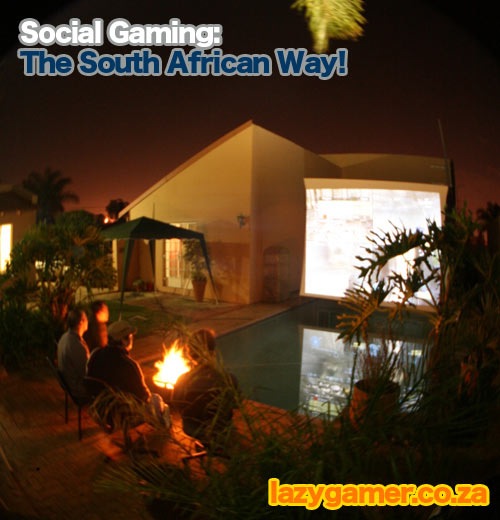 If you thought that split screen multiplayer was a thing of the past then think again. Us South Africans can always make a plan and this landed up being one of the coolest social gaming setups ever.

My friend Andre had a bachelors braai this weekend (nothing crazy), and decided to try something different along with the usual festivities. My buddy Regard bought a projector and asked me to bring along my 360 and a couple of controllers so we could try and play some 4 player split screen. So I grabbed COD4, Halo 3 and my Xbox 360 and headed over later that evening for the party.

I didn’t realise the full potential of the setup until I got there. Oh man, the screen was huge and as you can see in the images, was stretched out over the pool, you could even see the reflection on the water. Just like those fancy Operating System effects.

Players swapped out each round, all having a good go at COD4 and Halo 3, although some of the guys and girls had barely ever touched a console controller before. Everyone had good fun and the setup worked out really well. We all can’t wait for summer so that we can all chill on top of some Lilo’s and watch a movie. 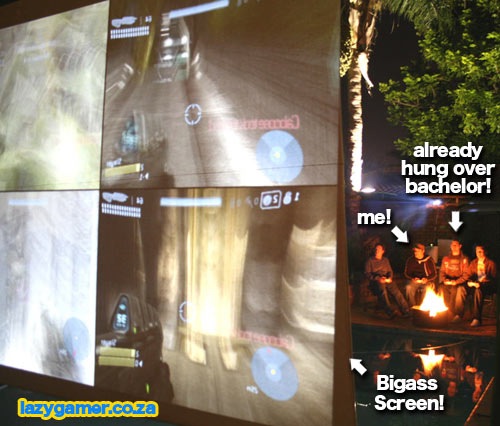 Once the party was over and almost everyone had left, we pulled the fire up to our chairs and whipped out marshmallows and some sticks and decimated the little pink and white barrel shaped goodies while we found new and wonderful ways to obliterate each other. We also then got to take some decent shots of the setup.

It brings a whole new meaning to camping in COD4.

Congrats to my buddy Andre (aka Smoeboe), who is getting married soon and thanks to Regard for the awesome idea. Excuse the blurry shots as it was quite dark and Regard had to leave the shutter open on the camera a little while to get a decent shot.