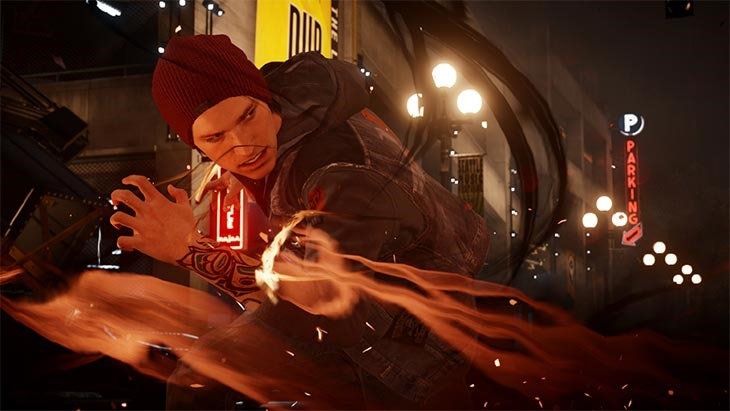 Yesterday we showed you some leaked, particularly spoilerific footage of Infamous: Second Son leaked through the game’s sharing feature. Sony’s, in turn, released an official one, showing gameplay so it’s not near as likely to upset those who want to go in to the game clean. It’s shows some of the powers our anti-hero Delsin will be privy to if he decides to be a giant jerkbag. Well, more of a giant jerkbag.

Coming March 21st, 2014. Like the previous games in the inFAMOUS series, Second Son gives you the option to use your powers heroically or ruthlessly,” says the fluffy PR blurb.

“The path you choose will affect every aspect of the game, from character relationships to powers development to the story itself. In this preview play through, Delsin has convinced Fetch Walker, a Conduit with the power to control neon, to help him take out a group of anti-Conduit protesters. With Delsin’s influence, Fetch is willing to exterminate the "haters" and anyone else who gets in their way. ENJOY YOUR POWER”

As I said yesterday, I’ve got this sucker ordered for next week’s long weekend, which I will probably have to spend playing some or other game instead. Are you planning on spending next weekend in a digital Seattle? And if you are – are you going good, or evil on your first play-through?