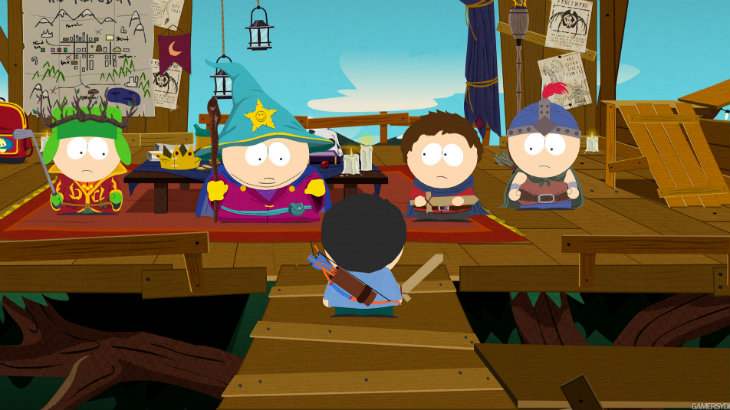 I am so, so ready for South Park: The Stick of Truth. Darryn raved about all the awesomeness in the game, and as a die hard South Park fan I simply have to play the game. However, some of my poor German friends will not be able to play it on Friday.

Germany has strong rules against the use of “symbols of unconstitutional organizations” (read: swastikas). I have German friends who weren’t even allowed to play with G.I. Joe as a kid because it glorified war. South Park is certainly irreverent and makes plenty of use of swastikas – and apparently sound clips from Hitler. It was predicted that this might cause some hiccups for German distribution, prompting VG247’s Dave Cook to get in touch with Ubisoft to ask about how they were dealing with this. They replied with:

with regards to the German version, all Nazi symbols have been removed from the game in accordance with German law.

Yet, somehow something has obviously gone wrong. According to Rock Paper Shotgun, the German Steam store page for South Park gives the following statement:

We are extremely sorry for the additional waiting time, and thank you for your understanding.

Hm, so was there confusion over censorship? Surely when they decided to delete scenes for the European market (viewable here thanks to our very own Darryn) they knew what was in the game that would need censoring? This is a known law in the German and Austrian market, much like age rating issues are known for Australia.

I’d say I’m surprised by this delay, but I suppose it’s hard to work around a way to make the game abide by these laws and still meet Matt Stone and Trey Parker’s standards for the game. You can’t just remove or censor the signs – it has to be be changed so that the game still has meaning and humor without them. I just hope they get their game soon – I’d hate to have to wait to play any longer than necessary.