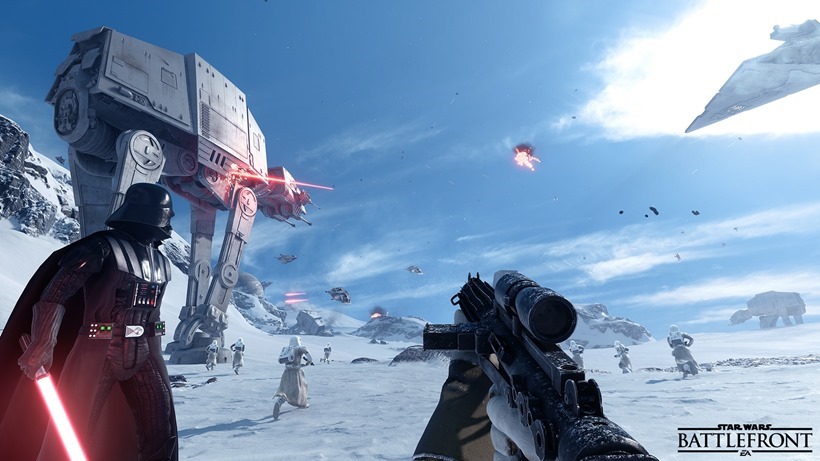 With the upcoming film quickly picking up some steam, I think a lot of bodies are really up for more Star Wars. And it’s exactly what EA and DICE are preying on too, with the reboot of the classic Battlefront series coming just before the film – with enough excitement around both to mutually leech off each other. Even better news then is that you’ll be able to jump into the first-person shooting a little early, regardless of platform.

That’s because Star Wars Battlefront is getting a proper beta for PC, Xbox One and PS4 – which kicks off at the beginning of October.

The beta will feature mostly the same content as the restrictive technical alpha of old. The biggest map will still be the 40-player Walker Assault on Hoth (the same map I got my hands on at E3), albeit with a few changes. Joining the fray now are Luke Skywalker and Darth Vader, two hero characters that players will be able to control for the Hoth map specifically. The beta will also feature the same Survival Mission on Tatooine, where you and a friend can pair up to take on waves of stormtroopers.

New to the beta though is a mode we’ve never heard of before. DICE have revealed something called Drop Zone, which will make its debut next month. There’s absolutely nothing about the mode online yet, but DICE have promised to flesh it out a little more in the coming weeks.

In addition to all of that, Battlefront will also get a companion app that acts as a small side-game to unlock perks within the shooter. The card game lets you unlock weapons and perks, while also giving you information about your profile, your loadout and more. Non-essential fluff really.

Available during the Beta at www.StarWarsBattlefront.com, the Star Wars Battlefront Companion experience features the strategic card game Base Command, and lets you earn in-game Credits that unlock Star Cards, weapons, and more in Star WarsBattlefront. In addition to Base Command, the Companion also lets Rebels and Imperials alike check game stats and progression, customize load-outs and appearance, connect with friends, and get notified when they’re playing Star Wars Battlefront – as well as gather intel on their stats and progression so you can see how you match up!

Despite the obvious comparisons to Battlefield, I really am excited to get my hands on Battlefront once again. I found it to be a dream-worthy experience at E3 – plunging me deep into a piece of digital fiction that my younger self probably wouldn’t believe was possible.