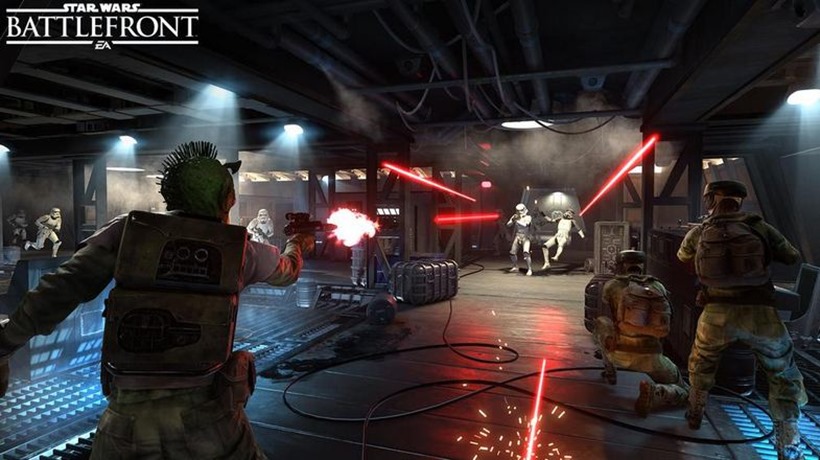 Star Wars Battlefront is really trying to break free from the Battlefield shell it finds itself encased in. Playing the game at E3, the shooter had enough elements to set itself apart, but still carried over a lot of core principles from the more realistic shooter franchise. A new mode, which developers DICE teased yesterday, might change that all.

Problem is, we’re going to have to wait a little bit to know what it’s even called. DICE tweeted the image above yesterday, announcing that a brand new mode will be revealed for the primarily online shooter later today. Right now, Battlefront has only shown off a Conquest-like multiplayer mode, along with a handful of single-player/ co-op missions. We already know that large-scale space battles are out of the question, which leaves many questions for what this could be.

Tomorrow’s new #StarWarsBattlefront mode reveal will be a blast. pic.twitter.com/v6RGyj6Z8Q

What we can see is someone that looks a lot like Greedo – the Rodian who may or may not have shot first – who would most definitely fill one or the more specialised Hero roles that the game offers for either side. No question here who got the first blaster shot off though.

But since that’s all the image really shows, I’m going to have to take a rather uneducated guess and assume this could be something to do with a Wave/Horde/Survival mode. Seeing Storm troopers flooding in from different directions while rebel forces bunker down definitely gives off that survival feeling – and it would fit right into they archetypes that most shooters adopt.

Either way, we should know by the end of the day for sure, and hopefully see more at Gamescom next week.