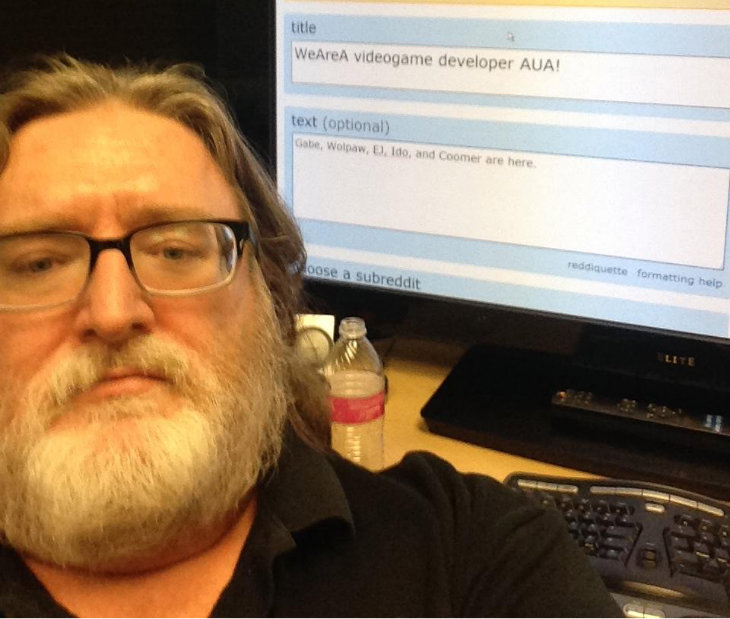 After his previously failed attempt at an AMA, Gabe Newell took to Reddit to answer a wide range of questions. Of course the Half-Life 3 questions abound, but here are some of the top questions and answers from the thread.

First up, some rather tame questions. When asked what he thought of the internet’s obsessions with him, Newell’s reply was simply “It’s entertaining for my friends” while his answer when asked if he ever plays games like TF2 on a secret steam account was “yes”. Then he was asked what improvements will we see out of the Source 2 engine, his answer:

The biggest improvements will be in increasing productivity of content creation. That focus is driven by the importance we see UGC having going forward. A professional developer at Valve will put up with a lot of pain that won’t work if users themselves have to create content.

Hm, so more user generated content? Does that mean we can hive-mind create Half-Life 3? As long as we’re on it, this interchange shows the desperation of the online community:

Q: Did you intentionally give 3:30 minutes notice of your canceled AMA on 3/3 just to torture us?

Despite numerous people asking, Newell didn’t comment on any requests for HL3 information. He did, however, give some comments on his favorite games. When asked for his favorite non-Valve game, he replied with Mario 64, but his favorite game at the moment is Dota 2, something he plays for about 20 hours a week.

So, why is Valve named Valve? Apparently “Because it was better than “Rhino Scar”“. Okay, so nothing to do with their development model.

Finally, for those who are curious about Gabe Newell’s specs, his reply was:

Well, I’m a handsome man with a charming personality.

So, no updates on Half Life 3, but otherwise a lot of cool information. In some of the buried comments he even answers questions about how he promoted Steam in the beginning, what his favorite knives are from his collection and when he first started programming (at age 13). Feel free to sift through the whole thing and tell me how I missed the fact that all his answers are divisible by three or something. Meanwhile, it’s nice to see these AMAs – I really enjoy how reddit and twitter make all these guys so accessible.