Home Gaming The Last Guardian pops up on Amazon

I don’t know if I’m alone with this but The Last Guardian is starting to feel a bit like Duke Nukem Forever. Full of early promise but it has now been in development for 7 full years and is already 3 years past its first official planned release date.

Originally the game was touted as a PlayStation 3 exclusive but recently the rumours have been pointing to the obvious need to bring the game to the new PlayStation 4 if it ever gets released.

However a new page has popped up on Amazon allowing people to pre-order The Last Guardian but only for the PlayStation 3. 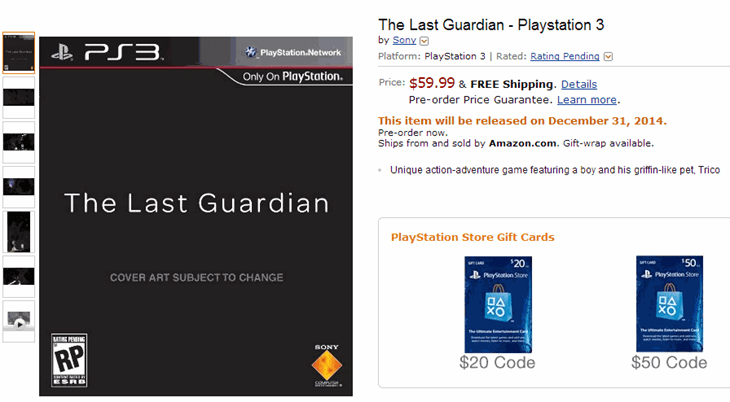 We can see that release date is an obvious place holder and other than that there really isn’t much else to see. It’s entirely possible that Amazon has just guessed this one to try and get some extra pre-orders in, or they know a release date is going to be announced at E3 and they have jumped the gun.

I remember when the first trailer was shown everyone was amazed at the size and detail of the game, however looking at it now and it really is looking dated.

The only reason I want it released now is so that the hard core fans can stop bringing it up and we can move onto bigger and better things.

[Thanks Brian for the tip]