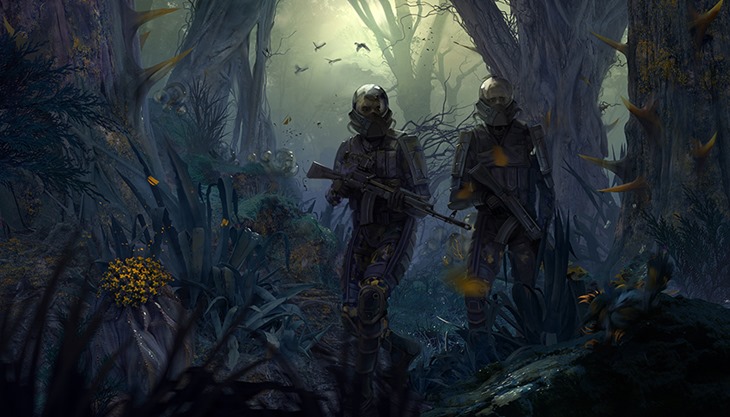 Yesterday, we told you that West Games, a company comprised of former GSC and 4A staff was planning to build a successor to the seminal open world, atmospheric shooter S.T.A.L.K.E.R. That entire Kickstarter campaign has now been mired in controversy – with Survarium developer Vlostok amongst many claiming that the whole thing is a sham.

In a now deleted post over on the Survarium forums, Vostok games’ Joe Mullin claimed that much of the artowrk used was from Stalker, with the following warning:

“We have contacted GSC’s lawyers regarding this fraudulent claim of being the developers of Stalker and Metro Last Light. Please do all you can do ensure people know these claims are false.”

Here’s what West Games says on its Kickstarter page:

“The core people that developed the S.T.A.L.K.E.R. series have come together to create a new team called West Games. Together, we’re developing a game called Areal, which continues the spirit of S.T.A.L.K.E.R., and adds an engrossing story, unique game-play and innovative features.”

Vlostok itself is comprised of former GSC staff. Oleg Yavorsky, PR Director of Vostok Games says that while it may be true that some of the staff at West games worked on Stalker, saying that they were the core team is little more than a fabrication

“So that you understand, over the years of development of the S.T.A.L.K.E.R. and then Metro series, there have been literally hundreds of people involved in working on various bits and pieces, starting from beta-testers up to modellers responsible for certain weapon models. Many people came to the studio to work for a few months just for the sake of adding “S.T.A.L.K.E.R. development” to their portfolio. Frequently they claimed afterwards to be the ‘core’ developers behind the game – you wouldn’t know anyway, right?).

His biggest issue is with West Games using footage from Stalker to try and sell this new project.

“Yet, my biggest concern is that West Games are using the footage and assets of S.T.A.L.K.E.R. and representing them as their own, which is not only illegal, but simply just not right. I guess it’s all made for the sake of getting extra publicity (which unfortunately works), but guys on Kickstarter should probably pay attention”

Much of what was shown in the Kickstarter trailer for Areal appears to be stolen Artwork, or bits taken from stock standard demo footage, like this bit from a Unity Demo.

10 games that you’ll have to change underwear for

With two excellent new horror games launching this month, let's take a look at the horror …