Breaking news: Riot are working on a new champion for League of Legends! Alright, that’s a dirty lie – referring to a new LoL character in the works as breaking news is the equivalent of announcing that Darryn will be at rAge yet again this year in another kickass costume (basically, we all know that already). Point I’m getting at though, is that Riot are working on something, but they haven’t officially announced what it is just yet.

What they’ve done in the meantime, is sneak some files into the LoL Public Beta Environment in a recent update. Nosy players (Surrenderat20) have picked through that data and spotted the following (via RockPaperShotgun):

Several more files related to the “They Are Coming” champion teaser have been added! These new files reference “Lamb“& “Wolf” plus several references to death. One of the files also mentions “Kindred” (Kindred_Base_Death_Avatar).

For example, here is a file labelled “TheyAreComing_Base_Promo_Mask“, showing a white and purple mask that each have what appears to be half of the “Swirl” seen in the original teaser. 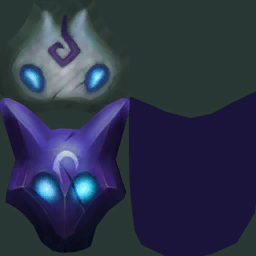 These two masks are observable in-game and seem to appear randomly on death, although they will not appear every time.

Here’s what these two masks look like in action:

My first thought was that this animation seems like the sort of thing that would appear during a special timed LoL event or something along those lines, and not something that belongs to a new champion. But then there’s this tweet from one of the Champion Designers at Riot Games:

Interesting indeed! How will this new champion work? We will just have to wait and see.

All we can conclude for now however, is that whatever it is, it’s a pair. Who or what is/are the ‘lamb & wolf’? I’m sure Riot will give us the answer soon enough. I look forward to seeing the official reveal, because their champions are always something special!

Riot have now shared a teaser video on the upcoming champion. You can watch it right here.