Home Gaming Tired of defending in Dota 2? Play these mods instead! 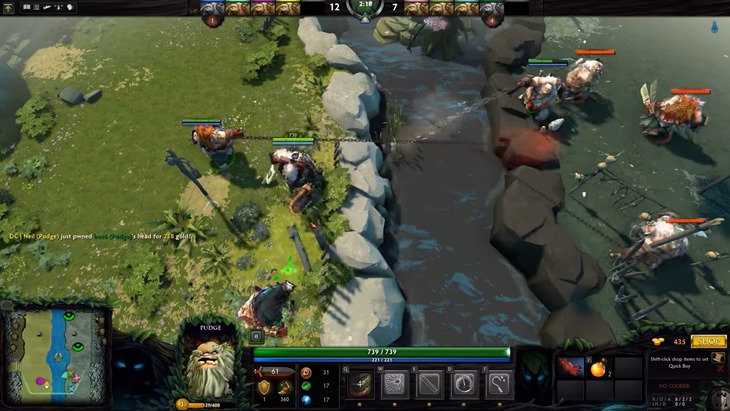 Warcraft III: that game where people spent more time playing mods than the actual game itself. Many fell in love with the DotA mod, so much so that even more spawned from it. The most popular was arguably Pudge Wars, where each player got to take the role of monster hooker with the goal of outhooking the enemy team . It was insanely fun, and something many have been requesting for Dota 2.

The good news is that it does exist, along with some other awesome mods. The bad news is that they are not officially supported. Regardless, they are still playable, and perhaps Valve will implement them, or at least support them at some point.

This is a classic which I’m sure many of you will recognise if you’ve played in sort of Line War mod. Your gold income increases depending on how many creeps you decide to send to the enemies lane. They too, send creeps back, which you need to kill before they reach your base. You can also buy items for your heroes, making them more effective at clearing up whatever is sent. The game revolves around balancing your finance. You need to decide whether you should spend gold on making your hero stronger, which results in a better defense but slower income, or whether you should boost your income, which results in a weaker hero and thus weaker defense.

A combination of capture the flag and conquest combined, this mode revolves around capturing and holding points which give various buffs (attack speed, gold income, etc), as well as capturing the enemies flag which gives a massive boost to your score. Netting kills as well as collecting wood and depositing it into the centre alter gives points too. The game is won when a certain amount of points has been reached.

This mode is all about skill shots and reflexes. There are various upgradeable spells and items on offer. For example, you may choose to buy a spell that has a long channelling time, but it does a huge amount of damage if it hits the enemy. Similarly, there are also spells and items which add to your mobility, giving you the positioning advantage or the ability to dodge incoming projectiles. Killing the entire enemy team will win the round, and the game is over when a certain number of rounds have been won

Finally! Exactly what people have been wanting. Teams are separated by a river down the middle of the map, while each player is given Pudge to play with.  There are various items and buffs for sale. A player can choose to make their hook faster or fly further for example. The game is over when a team reaches a certain amount of kills.

Lastly, Dota Dash is basically a karting mod for Dota 2. Much like the typical karting game, the player needs to navigate the track as fast as they can, while powerups and such can slow down the enemies around them. Sound ridiculous? Absolutely! Have a peek at the trailer.

As I’ve mentioned already, these are not officially supported. This means that there are very few servers, so finding a game could take some time. It would be great If Valve could introduce these officially along with a proper server browser.

Which of these could you see yourself spending some time with?