Respawn have announced that they have started punishing cheaters in Titanfall. According to a blog post on their site they have been running the server-side anti-cheat software FairFight ever since the release of Titanfall.

Farifight is the same software that powers the anti cheat ability in Battlefield 4 and according to their website:

“Fairfight uses two overlapping and mutually supportive approaches to identify cheaters: algorithmic analysis of player statistics and server-side cheat detection. FairFight uses algorithmic models to evaluate gameplay against multiple statistical markers to identify cheating as it occurs. FairFight crosschecks these indicators using objective server-side reporting tools. It takes action when both approaches correlate to cheating — and because you establish FairFight’s tolerances and the in-game actions to be taken against the hacker, you are in control of your game like never before. ”

And now Respawn have revealed they are going to start using it to ban players who have been caught by the system. So how do you know that you’ve been tagged as a cheater? Well when you load into a lobby you will see the following screen 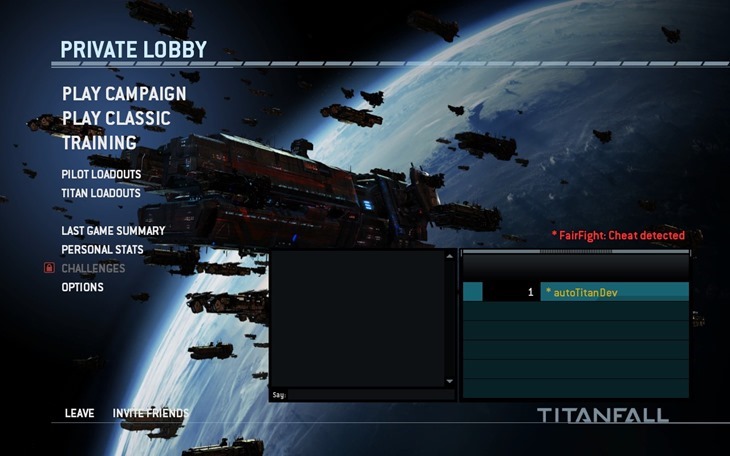 The most obvious sign is the red text stating “FairFight: Cheat Detected”, I see the challenges are locked but that is because the user is too low a level to activate them yet. However I’d be surprised if you would still be allowed to complete challenges while being tagged as a cheater.

So you get caught and can’t play anymore right? No actually you can continue playing but the catch is that you can only play against other gamers who have also been tagged as cheaters. I’m actually interested to see how a game made up entirely of cheaters actually plays out. Since you know everyone will continue to cheat.

So you’ve been caught and you want to atone for your sins and have your cheater tag removed, how do you go about that?

Well Respawn has simply stated that if you don’t believe you cheated then email them on anticheat@respawn.com which appears to imply that if you are a cheater then you have no way to go back and have that tag removed. It’s a permanent scar on your gamertag and since FairFight is used across multiple games your cheater tag may sit with you forever.