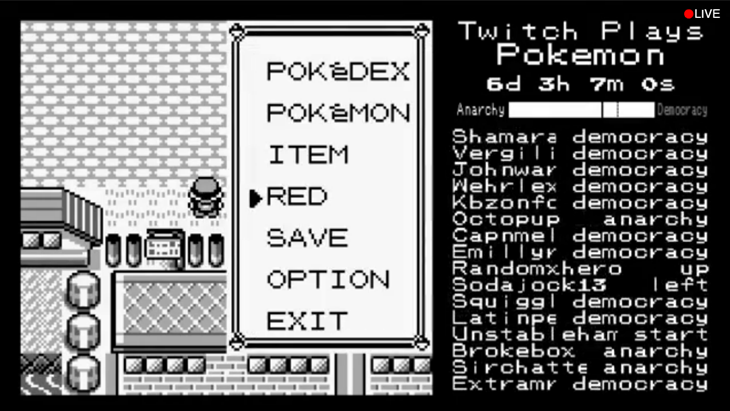 Remember the madness Twitch Plays Pokemon I befouled Lazygamer with two days ago? Well much like evolving primitive man, the 120,000 strong viewer count now gets to potentially decide via popular vote what controls to input via the advent of a democracy system.

The blurb on the Twitch page explains the new system quite well:

Anarchy mode is the “old” mode, where everyone’s inputs are applied immediately.

Democracy mode is vote-based and has a more sophisticated input system. 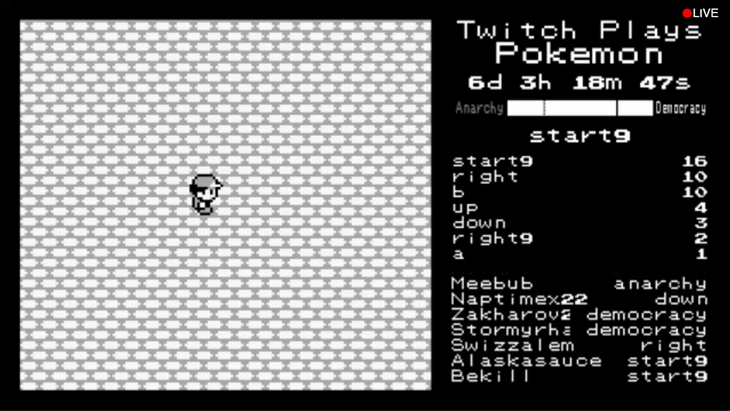 Unfortunately, the entire chat is full of first world anarchists who don’t need no democracy. Even worse is that when the democracy system does get voted in, it’s still 100,000 plus people who don’t agree with each other and then people use it to spam start, further impeding progress!

The good news is they just collectively beat Giovanni in the Silph.co complex. However, they forgot to pick up the Silph scope, which they need for Lavender tower if they can’t use a Pokedoll on the ghost. Now they’re stuck in Celadon city trying to decide what their next goal is.

Watch live video from Xkeeper_ on www.twitch.tvIn an interesting turn of events, it seems that the inputs sent to Twitch Plays Pokémon are also being hijacked to play Tetris on stream. So not only are they playing Pokémon like their controller is broken, but they are also playing Tetris on a separate stream with the same inputs at the same time! When will this madness end? Is there more important news? Probably! But the absolute bonkers never ending rabbit hole of Twitch Plays Pokémon is just mind boggling!

I’m not sure why I’m so enthralled watching, maybe because it’s proof that people en masse will never agree on a damn thing, especially on the internet. Even the advent of democracy cannot help these damned souls, forever hitting start. It’s sort of like watching a snail climb up mount Everest, only the snail has no control over himself, and the control has been given to an insane asylum. They’ve been going for six days now, and I’m wondering if it will ever end.