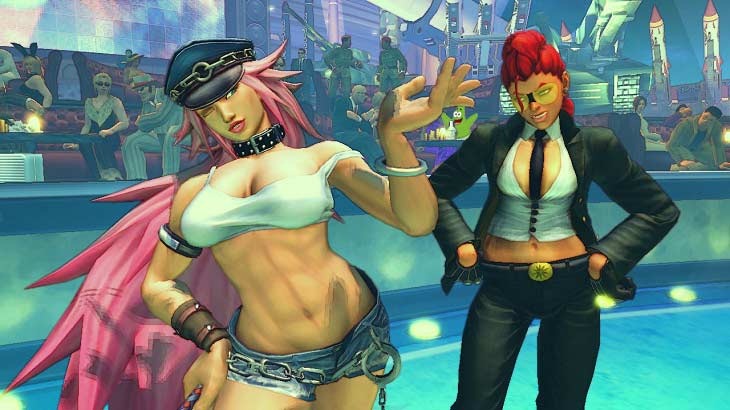 Jissum bru, I’ve gone and eaten so much of that muscle powder stuff in order to be a beefcake (BEEFCAKE!), that I think that I can throw Hadoukens thanks to the protein-induced hallucinations. While I start powerlifting those teddy bears, check out the new expanded roster for Ultra Street Fighter IV. BEEFCAKE!

Ultra Street Fighter IV won’t just be another rebalancing act when it launches later this year. The game is throwing in five new(ish) fighters into the ring. So far Rolento, Hugo, Poison and Elena have made the cut. And the fifth and final fighter is…Decapre!

And here’s the official description of Not-Cammy from Capcom:

Making her first brief appearance in a Street Fighter game as a non-playable character in Street Fighter Alpha 3, where she was seen as one of M. Bison’s Dolls, Decapre now joins the fight! Although a partial mask hides a giant burn mark located on this Russian beauty’s face, challengers will be scarred by her quick and elusive scramble moves as well as her psycho power infused attacks, which allow her to share her pain with her opponents.

The game does have a few new features, much like Formula 1 has a few new incremental designs on a car each year. Red Focus allows for more invincibility during combat, Ultra Combos and damages have been retooled and players can now select between various Street Fighter IV editions, just in case they want to go back to 2008 and spam the ever-loving Tiger Attack out of a match.

Sex Education returns to Netflix in 2020