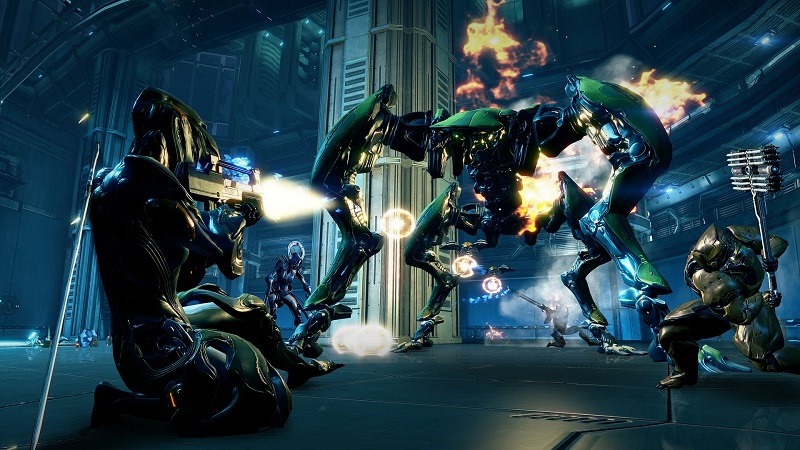 Hi, my name is Martha Cabbage, and I’m a hopeless Warframe addict! I’ve been playing the game for a few months now, and It still surprises me that not many people seem to know about it. When attempting to enlighten friends of mine, I always ask the same two questions. Do you like space? Do you like ninjas? If you answered yes to both of these, then you may want to try Warframe out, because SPACE NINJAS!

While the game has not officially been launched (it’s still in beta), it has been playable on PC and PS4 for quite some time now. Planning on getting the Xbox One? The game has just been released for the new gen Microsoft console.

Just to bring you up to speed, a Warframe is the exoskeleton/suit your character wears which aids them in all the combat they do. Like what you eyeballs see? You can do just about everything seen in the trailer. Shooting, slicing, flipping, wall running, and not to mention all the abilities the various Warframes have. There are also dozens of weapons to play with, and even more mods which can be used to buff them.

I’m not even kidding though… anybody who plays the game describes it simply as ‘Space Ninjas’. It is a little more than that. You take the role of a Tenno, an ancient being who has been in a deep slumber spanning several centuries. Space is not the friendly place it once was. The Tenno have to deal with several factions who are out to wreak all sorts of havoc. Missions take place over several planets, all with their own unique look and feel.

The game is entirely free to play, with the option of spending money on various items if you wish to speed up the process. I’ve sunk in dozens of hours, and I can confidently say that while farming some items may be time consuming, it is a lot of fun. There is nothing on the market that you can’t acquire in game somehow. I’ve spent $20 over the past few months, and I have zero regrets. The developers have given me many hours of ninja goodness!

At least those looking to adopt the Xbox One will have something to look forward to if they can’t afford a bunch of games on launch. Warframe is highly awesome, highly addictive. Play it at your own risk!