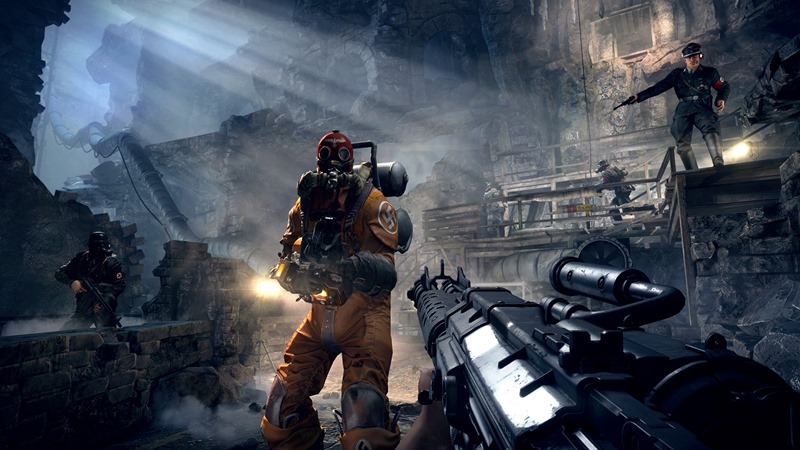 Easily one of the best, purest first-person shooter experiences of 2014, Wolfenstein: The New Order breathed new life into the anti-Nazi war machine when it was released. It was a no-frills blaze of glory that focused only on telling a single-player story over various missions and hours. Since then however, all has been quiet on that front. Until now, as the game is about to inject some Old Blood back into its veins.

Set in 1946, the prequel finds BJ Blazkowicz doing what he does best: klling Nazis in a two-part mission set deep inside Bavaria, as he goes after a mad prison warden deep inside Castle Wolfenstein in search of some payback and the coordinates to General Deathshead’s compound. Part one of the game is called “Rudi Jäger and the Den of Wolves “, while part two is titled “The Dark Secrets of Helga Von Schabbs” and sees BJ play a game of Aryan vs predator in Wulfburg as he tracks down a Nazi archaeologist who is on the brink of unleashing a darn and ancient power.

“Diving back into the world of Wolfenstein has really been fun for us,” said MachineGames executive producer Jerk Gustafsson in a press release.

We’ve enjoyed exploring the events leading up to The New Order. We think fans will really enjoy the story, all the action and, of course, jumping back into the combat with new weapons.

According to MachineGames, the game will feature new weapons such as the bolt-action rifle, 1946 shotgun, and the grenade-launching Kampfpistole, as well as all new perks to unlock that focus on either massive action or deadly stealth. Here’s the trailer for the game:

Ad since I succeeded in fixing my clock last night (I haff vays of making it tock), here are some new screenshots as well:

The prequel is out May 5. Priced right, and it could be a fun piece of the ol’ ultra-violence.