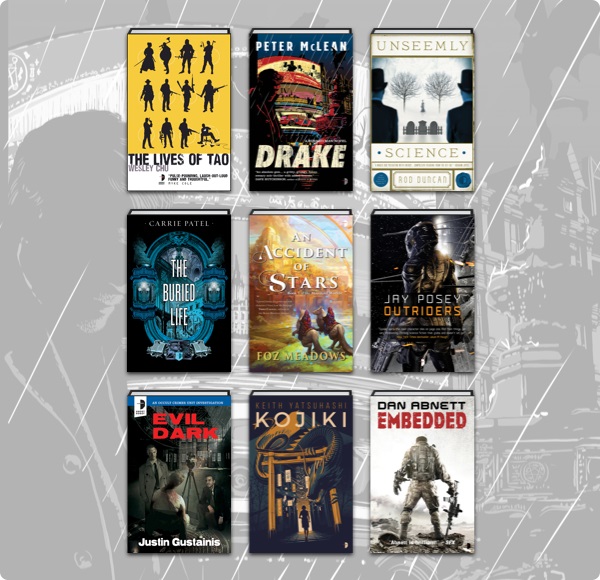 Angry Robot is a UK-based publisher which began operating in 2009 with the mission to “publish the best in brand new genre fiction – SF, F and WTF?!” They’ve teamed up with Humble Bundle to bring us the SF & Fantasy Bundle which covers a wide array of genre writing. Twenty ebooks covering military sci-fi, urban fantasy, alt-history, post-apocalyptic, and more are represented in what I think looks like a damn good selection of entertaining reading material.

The ebooks are DRM-free and come in .pdf, .epub, and .mobi formats for your reading device of choice. As is the norm the bundle consists of three tiers, and the first $1 tier includes the following titles:

Chip in further $7, making $8 in total for the maths-challenged among us, will unlock the second tier which includes the following titles in addition to those above:

Spending a minimum of $15 (you can spend more if you’re feeling charitable) will unlock the entire bundle and open up even more titles for your reading pleasure:

They’ve saved the best for last, literally. If you enjoy action-packed military sci-fi look no further than Dan Abnett, whose Warhammer 40k Gaunt’s Ghosts series is among my favourites in the genre. I haven’t read works by any of the other authors here, but it looks like an intriguing mix of genre writing. I’d quite happily spend $15 on Abnett’s book alone, so getting another nineteen for “free” seems like a steal to me.

Drawkanoid is breaking out onto Steam on January 21st

Developed by Cape Town based QCF, it’s not just the neon lights messing with your eyes, it…