It’s been a long dry spell for cricket fans in the video game industry. We’ve been taunted with one or two possibly good games only for them to fail at the last hurdle and end up being as useless as Kevin Pietersen’s opinions. So will the great Don Bradman save us or are we doomed for another few years? 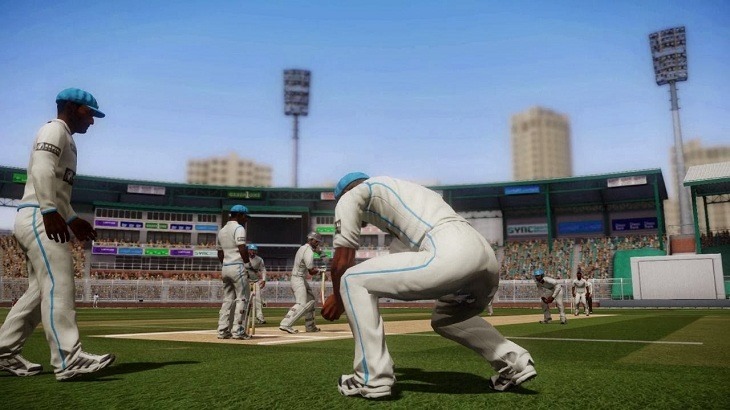 When I heard that Don Bradman Cricket was coming the first thing I did was to go and look up the studio making it to see what their abilities are like and whether they could handle such a technical title.

The game is developed by Big Ant Studios who are famous for developing… well nothing outside of Australia actually. They have done two Spyro games and a bunch of Rugby League games and appear to have ported Jetpack Joyride but there is nothing here that made me confident they could handle it.

And then the game was delayed and a cloud of depression settled over my hopes and dreams. 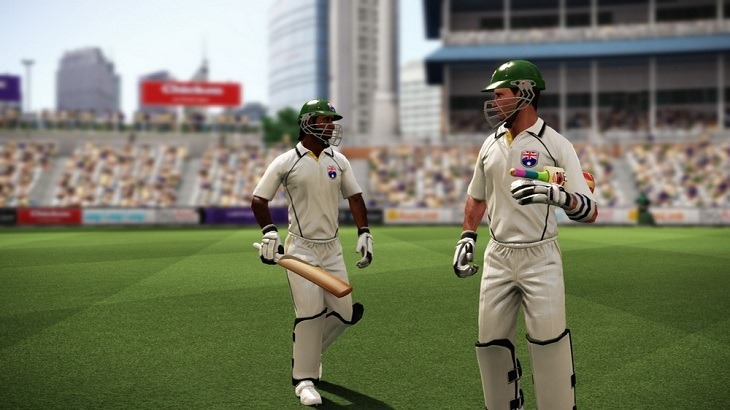 Another really important aspect to me personally in sports games are the licences and player likenesses in the game. I don’t enjoy playing sports games where you can’t recognise anyone and the stadiums are just generic nonsense. So again when I heard that Don Bradman had only two licenced stadiums and one licenced player, Don Bradman, I was disappointed. However the very clever guys at Red Ant have been, well,  very clever here.

When you start the game you are asked if you want to import the current top community created teams from The Cricket Academy. So basically what this means is the game ships with no real teams but when you load it up and are connected to the Internet you can import these community teams and suddenly you have all the best players looking like themselves with the correct attributes.

It’s an awesome way to work around licences and I hope there aren’t any inflated egos out there who try and stop them doing this. 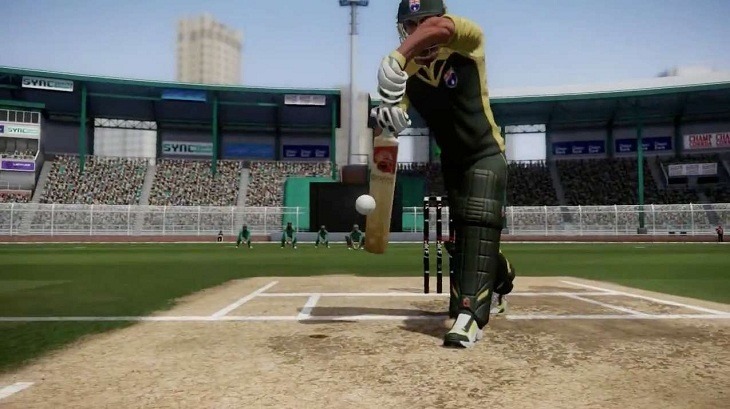 Don Bradman Cricket 14 ships with a multitude of game modes with the most common being Tournament, Tour, Career and Practice Nets..

In career mode you get to customise your cricketer to the nth degree and then you start off a career as a 16 year old whippersnapper and try and fight your way up to the best cricketer in the world over a maximum of 20 seasons. It’s a long hard slog and is really only for the serious cricket fans out there.

The more common mode is tournament where you can play anything from a best of 1 T20 game to a full round robin tournament mode. This is easily my favourite mode and hoisting the trophy at the end of a thrilling T20 tournament definitely gave me some pride. Each team you play against has got an entirely different play style and you are going to need to learn how to bat against seamers and spinners as well as bowling as both. The Tour mode lets you recreate some fantastic tours of the past and just last night I smashed the Bangladeshi test team in just under a single day. But the game is not easy, I will cover this later on. 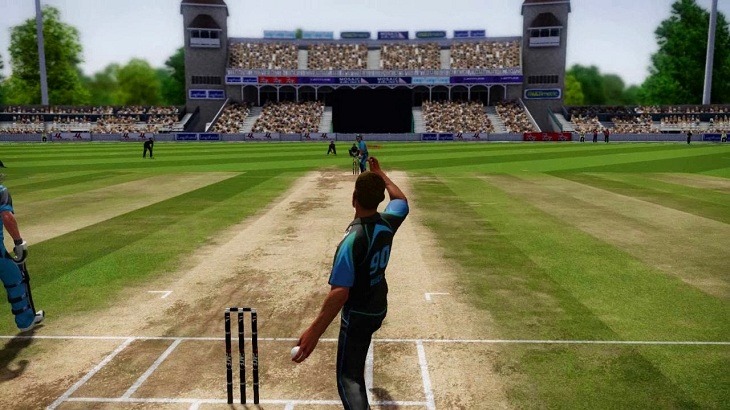 The controls are definitely unique and take some getting used to. When playing on an easier level the game will give you some guides on how to bowl. As a fast bowler you start your run up by pushing a button that corresponds to how you want to pitch the ball, You then hit either the right bumper for a fast ball or the left for a slow ball. As you near the crease you push the right stick up to start your jump and then push it down when you have chosen exactly how you would like to release it. all while aiming down the pitch.

Every bowler has a different run up speed so the spot where you need to jump and release changes depending on each. After a few overs you get comfortable with this and can easily send down a blitzing yorker or a slow full ball and skittle their stumps. This is when you need to up the level and by the time you get to veteran the guides all disappear and you have to figure it all out for yourself.

The difference between a perfect yorker and a simple full toss is now decided by milliseconds making the game so much more difficult. I got absolutely smashed trying to play on veteran. Spinners work in a similar manner where you hit the button and bumper to pick options and then as your man gets close to bowling you spin the left stick to get a certain type of spin and let it go with the right stick. Spin bowlers are very important so you will want to practice this. 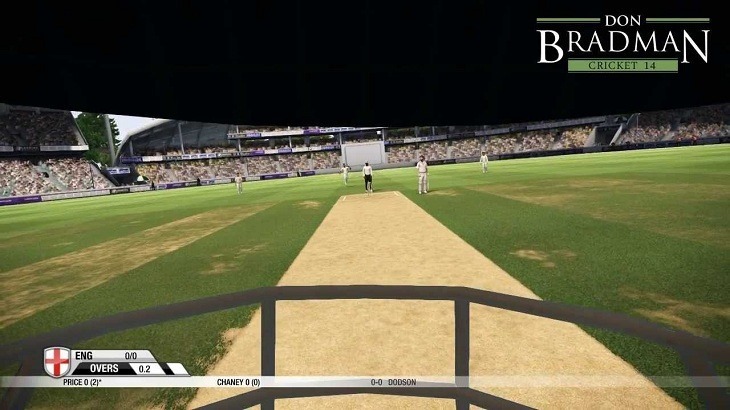 If bowling confused you then batting is going to drive you to drink. The idea is simple, you use the left analogue stick to move your feet and shape your body while the right stick swings the bat. It feels weird in the beginning but after a while it becomes very intuitive and I’m now semi-comfortable leaving a ball late only to step back to the right and cut the ball to 3rd man. Or step across my wicket and hook it over my left shoulder for 6. And you need to learn all these tricks as the game will alter the fielding and bowler if you think you’ve found the perfect shot.

You can also use the left trigger for power shots, the left bumper for reverse sweeps and the right trigger for defensive shots. My hands can’t hit the right bumper and the sticks at the same time so who knows what that one does, but it will do something.

The graphics in Don Bradman Cricket 14 aren’t terrible but at the same time you aren’t getting a game that even remotely approaches FIFA 14 in visual quality. The crowds are flat and boring and the stadiums are equally as dull.  The fields all have a certain amount of canned animations and it won’t take long before you get irritated with your bowler taking off the bails every time you throw the ball at him. But none of that really ruins anything. 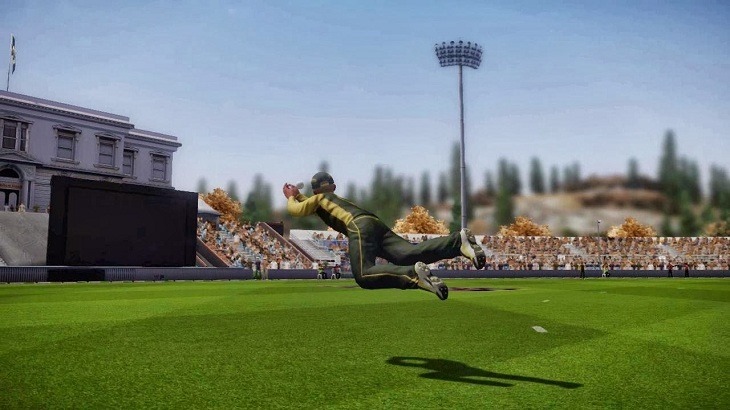 The animations and graphics in the instant replays and appeals system are very good and the hot spot is definitely my personal favourite. Appealing a nick and then seeing that tiny bit of white on the bat is depressing.

But that does raise another point. The game has been designed for the umpire to get it wrong sometimes which I think is absolutely brilliant. I have successfully appealed being given out and for my opponent to be given safe. As in real life the umpire is generally right but if you are sure you got him LBW and the umpire isn’t giving it, then appeal. It’s there for a reason.

And it’s in the appeal system that you see how very good the physics of the game actually are.The collision detection of the ball and the player, stumps and bat appears to be spot on. I haven’t seen a mistake yet and when you are going through the appeal system everything slows down to a frame by frame follow through and the slightest nick does change the path of the ball.

Overall you can see that this game hasn’t been made by a billion dollar company. The graphics and out of game experience (menus and such)  are clunky and definitely not refined through user experience testing. However you can also tell this game has been made by fans of cricket and all the important aspects are definitely included in the game. From the in-depth appeal system to the control you have over batting and bowling and even down to the difficult in catching. 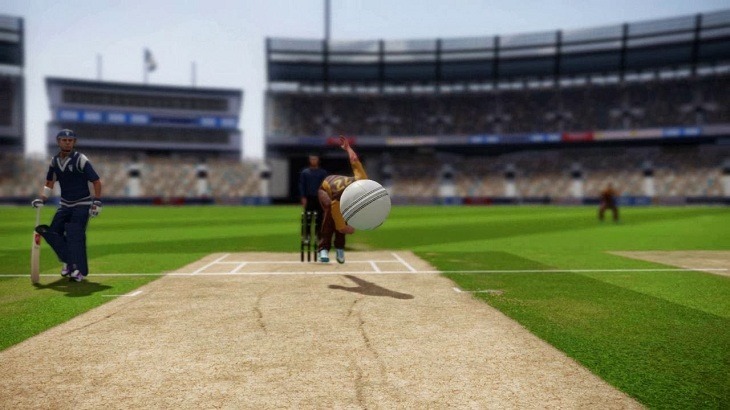 Just being in the way of the ball isn’t going to assure you of a catch and a fast bowler catching a ball smashed right back at him is incredibly difficult to pull of. If you’ve been waiting for a real cricket game since Brian Lara or Jonty Rhodes cricket then wait no more.