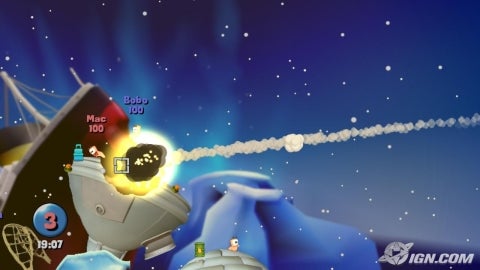 So IGN has reviewed Worms and unfortunately it has come out lacking.

They complained bitterly about the net code, lack of games, slow speed and general not wormy feeling in the end.

Take the old 2D Worms games, subtract most of the cool weapons and a few features, add in some network errors and you’ve got Worms on Xbox Live Arcade.

This is very sad since it has taken so long to get Worms onto the XBLA and now it’s not very good. Let this be a warning for any future XBLA games that struggle to get certification.

I am still planning on giving it a bash but this is dissapointing isn’t it?