Home Gaming inFamous: Second Son Review – Come as you are

inFamous: Second Son is one of the few new games for the PlayStation 4, built on a franchise that isn’t shared with other platforms. It’s a game that is meant to be a bridge between generations, while drawing in new fans and keeping the old ones from moving on as the game shows off what the PS4 is capable of. And it succeeds in all those departments magnificently. 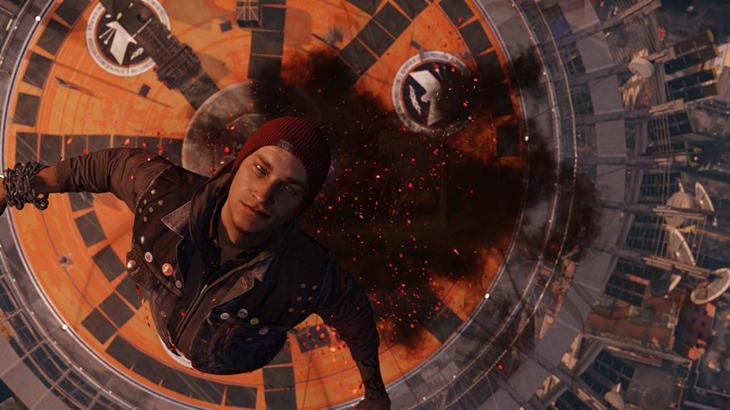 A new generation of consoles calls for a new hero. Whereas inFamous 1 and 2’s Cole McGrath was a free-spirited blue collar electrified Joe, Delsin is a rebel to the core. Headstrong, aimless and ready to buck any authority figures in his life, he’s a shiftless graffiti artist until that fateful day that he winds up with powers.

Delsin soon finds himself caught up in events, that necessitate his journey to Seattle, now under firm lockdown by the Depart of Unified Protection. DUP patrols the streets, everyone hates Delsin because of his status as a hipster Conduit and his long-suffering brother Reggie has come along for the ride. 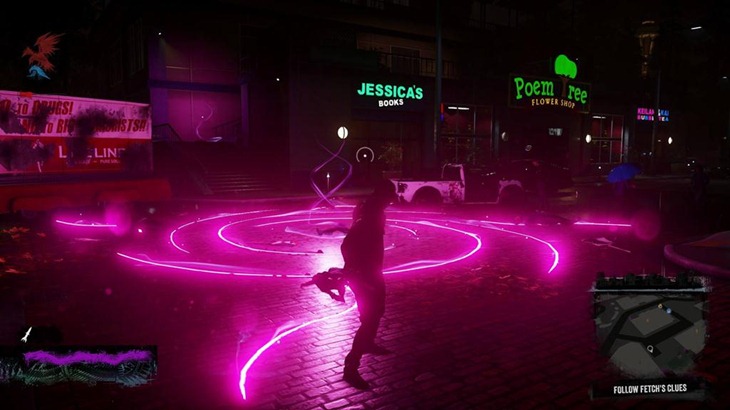 Starting out with Smoke, Delsin becomes a one-man army with a set of powers that are defined by his attitude. All the old inFamous regulars are there: Fast healing, infinite stamina, high jumps and some wall-scaling parkour.

Smoke gives Delsin more of an edge however, bolstering his mêlée attacks with some tobacco and ember power, allowing him to fire deadly bolts, charge them up for a shotgun-like spread, fire heavy-duty missiles and throw bombs that’ll suck the air right out of a hapless goon and leave them with nicotine poisoning.

The real fun however, is in using these powers to navigate around Seattle, flying through vents in buildings to instantly ascend, blasting through the sky and hovering around. It’s not dissimilar to the electricity that Cole used in inFamous 2, but that’s the thing about Second Son; it sticks very close to the formula laid out in that first sequel.

But that’s not a negative really. Controls still feel tight, combat is varied and the game is a challenge on any difficulty setting as gamers get a massive sandbox to romp through. Feeling like a very refined version of inFamous 2, the game offers all the action from the previous game, with a few new additions. 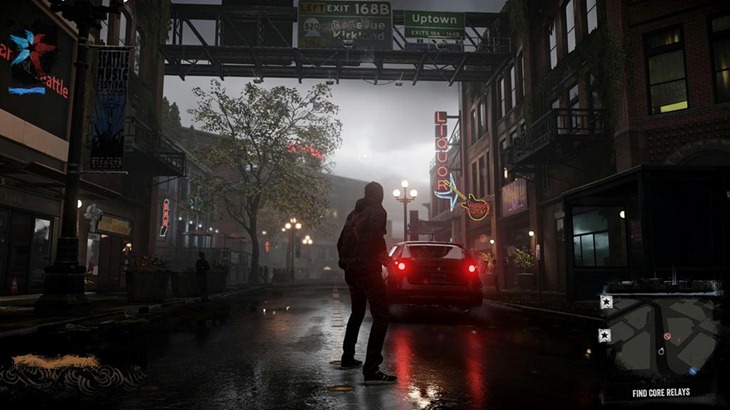 City blocks need to be freed from DUP control, a feat that can be achieved by engaging in several smaller side missions. Find a DUP secret agent, disable security cameras and tag some walls with graffiti, and you’ll drop their influence in that block and eventually initiate a showdown between Delsin and the remaining DUP forces in that area.

It won’t be easy though, as DUP agents come in several granite-flavours. Run of the mill soldiers will come at you with guns blazing, heavier augmented soldiers will chase you up rooftops, super-heavy troopers will require tons of firepower to bring down as they attempt to see if firing the contents of a small nickel mine into you will result in your death and specialists will attempt to contain your movements. 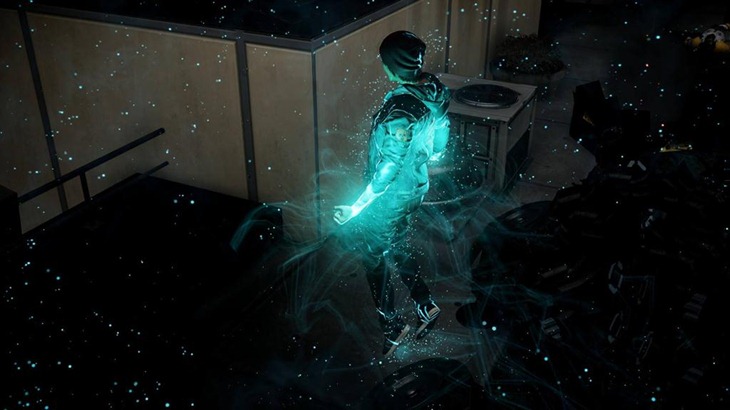 Throw in turrets, APC vehicles and outside interference depending on how you play the game, and you’ve either got to plan your attack or be quick on your feet. Thankfully, you wield enough power in the game, quickly unlocking Neon powers after you gain your Smoke abilities. As a power sponge, Delsin learns a few more tricks, but I’m not going to spoil that here.

Each of the powers that Delsin assimilates also share a few similarities to one another. Quick blasts, heavy duty missiles and augmented melee attacks all feature in the package. Key differences though, would be that while smoke provides a quick and versatile manner with which to inflict some damage, Neon allows for more precise action, as it targets vital areas that help Delsin to extend either his good or evil alignment. 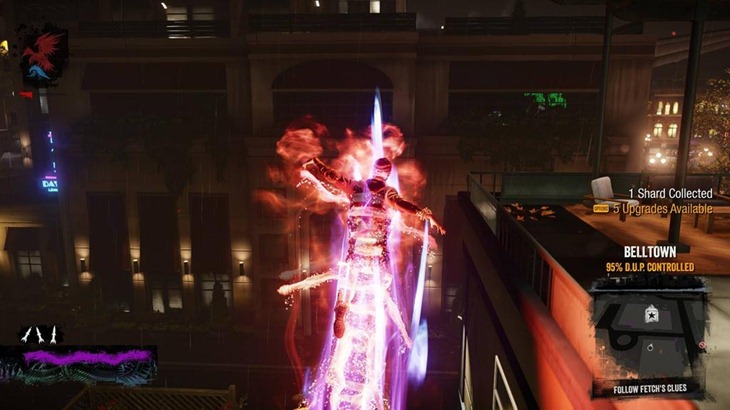 Each ability can also be unleashed with one ultimate attack, leveling the field of any and all enemies in a cavalcade of explosive colour and, er,um explosives. They’re rather pretty to look at when you seem them in action.

Powers can be further improved with blast shards, found throughout the game. Mobile drones litter the skies of Seattle, and shooting them down will allow Delsin to absorb the energy inside their sensors. Once you have enough shards, you can focus on the powers that you want to improve on. Want to absorb smoke more quickly and efficiently? There’s a skill tree for that. 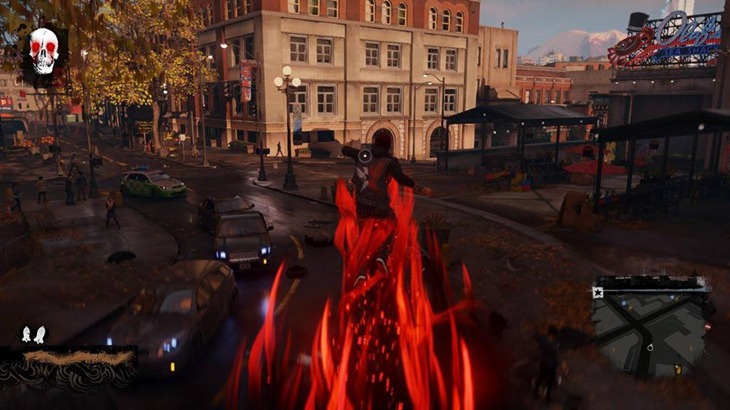 Or you can choose to increase the damage you deal, or unlock new moves such as teleporting behind a DUP soldier and face-planting him. Certain skills will be off-limits however, depending on your current karma. Dip too much into the dark side, and certain light side skills will be out of your reach. And in inFamous: Second Son, there’s no grey area wiggle room here.

You’re either good or evil, a path that you decide to embark on early in the game. Some might bemoan the forced morality, but at the same time, it gives Second Son the replayability that it needs, so that players can experience a different side of the law for themselves, with varying consequences.

And yes, I chose the evil side first. 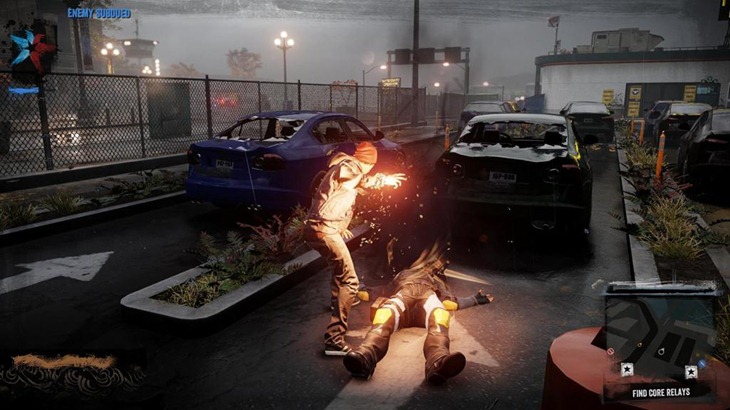 Keeping in tune with previous games in the series, inFamous is a challenge no matter which difficulty you play it on. DUP agents are relentless and boast an improved AI that makes them look for cover, dodge your attacks and blind-fire at you. What really ups the ante however, is how certain agents will use their abilities to create teamwork. You may find yourself picking off one agent, when all of a sudden you become encased in concrete while another agent rallies the rest of the troops and they start introducing your face to the friendly side of a rifle smack. As I said, a challenging game.

One aspect of the game that hasn’t really carried over however, are boss fights. There are only four such fights in the entire game, and two of them are with the chief antagonist. The second fight is a fantastic use of the PS4 hardware and game software to create something that is visually magnificent, but don’t go into Second Son expecting plenty of epic showdowns. 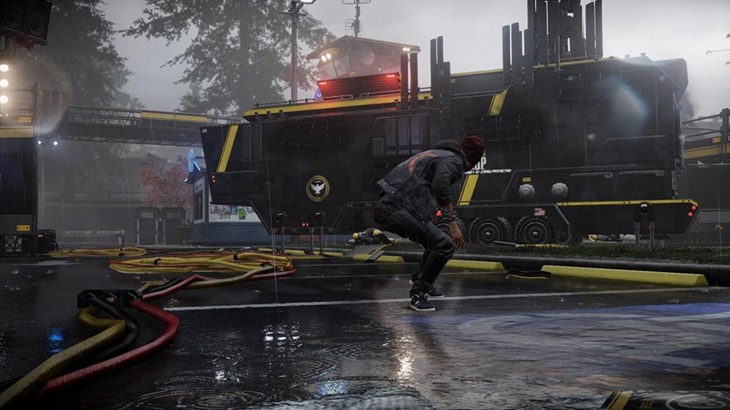 What has survived however, is some absolutely magnificent acting. inFamous 1 had it, inFamous 2 excelled at it and now inFamous: Second Son has set a new benchmark. Characters have nuanced facial expressions, mouths open and purse in realistic manner and even skin wrinkles as Delsin and co experience a range of emotions. But it’s not just some great tech on offer here. It’s software that is complemented by solid voice acting and writing.

We’re in a new generation of gaming, and Delsin may very well be the first of a new breed of heroes for the PlayStation 4/ Xbox One era. Delsin feels remarkably human, and acts out in a manner that anyone of us would if we were in his beanie and had his skills. He’s not a walking tank of muscles and witty one-liners. He’s a full-fledged character who happens to be cocky, yet flawed. And one likeable bastard at that. 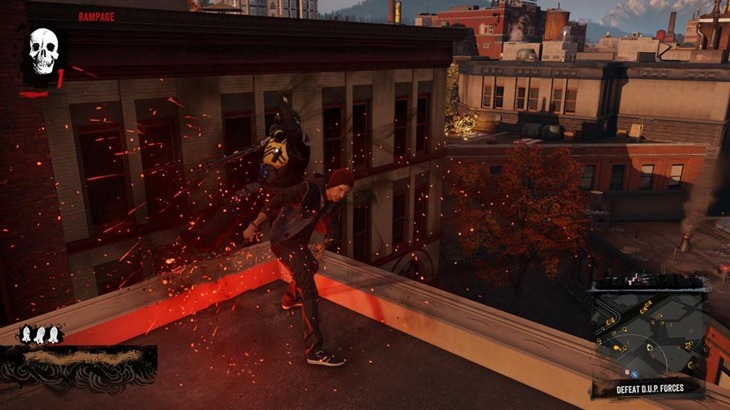 Likewise with his brother Reggie, Delsin sets up a new dynamic throughout the game that echoes the brotherly relationship of Cole and Zeke from the first two inFamous games. And hot damn, inFamous: Second Son does not disappoint when it comes to visuals.

Whether you’re beating up coffee-sipping hipsters on a rainy Seattle day, or watching Delsin smirk as he launches himself into the air before he slams the ground, the game is firing on all cylinders. The frame rate is kept at a smooth 30-odd frames per second the whole time, never dipping and sometimes going up. 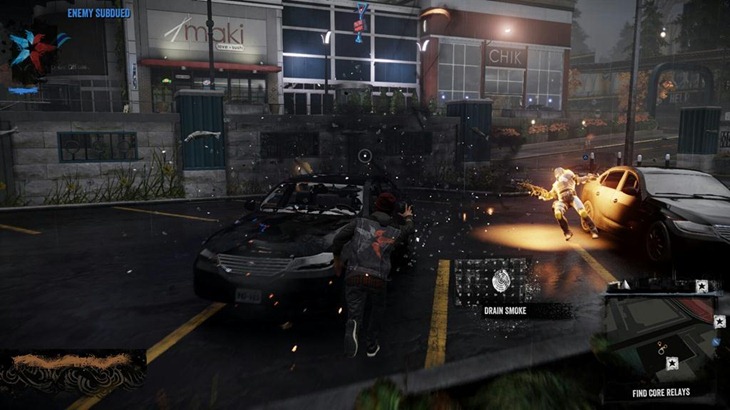 Textures shine, particles explode and the game sounds magnificent. We mentioned earlier this week how inFamous: Second Son was putting a ton of effort into the audio. While after hooking the PlayStation 4 to a Dolby surround sound and turning the volume to 11, I don’t want to go back.

Smoke and the other powers don’t just have their own distinctive look, they sound unique as well, with each ability providing various audio cues. It’s an aspect of gaming that will be overlooked sadly, but audiophiles will appreciate the subtle work thrown into this department. 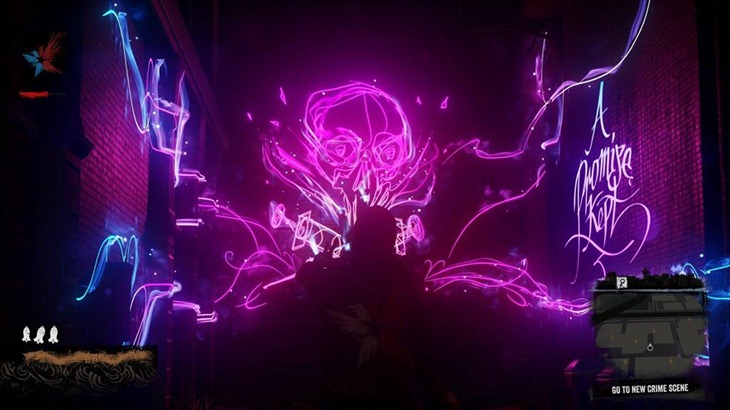 As for length, Second Son proves that single-player games aren’t going to die off anytime soon. Playing through at least once and focusing on your karmic alignment while ignoring side missions will take you at least 8-10 hours, so double that and throw in a few more hours of freeing Seattle, and you’re going to be busy for quite a while.