In a world of games that are bleak, miserable and violent, I’ve always been able to rely on Nintendo and Hal’s loveable, fluffy, pink ball to provide a bit of imaginative whimsy and playful joyousness.

The very first game to feature the versatile pink vacuum, the Gameboy-bound Kirby’s Dream Land was a little too simple. Its NES follow up, the game that introduced Kirby’s copy abilities unfortunately came too late in the system’s lifecycle; many had already moved on to 16 bit gaming. Unfortunately, that means that Kirby doesn’t quite have the magnetic draw that other Nintendo characters like Mario have. 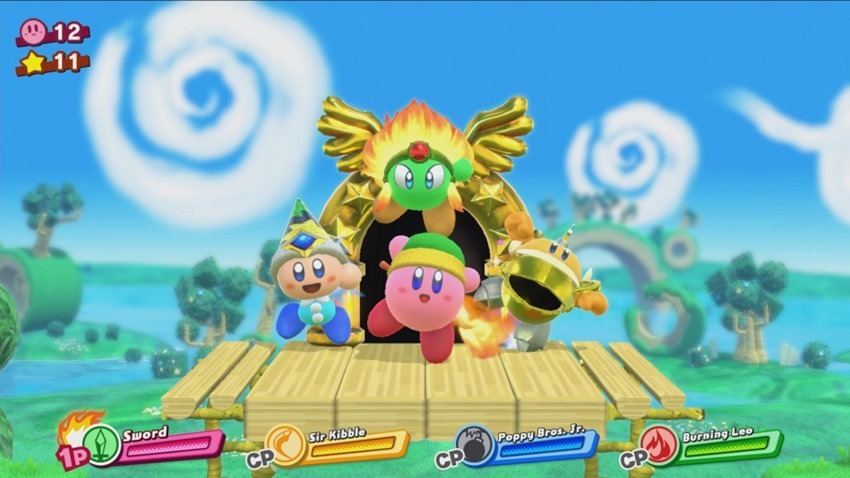 Since then, Kirby’s been in a number of games spanning multiple genres. He’s been in pinball, puzzle games, mini game collections, and even appeared as a giant ball of yarn. I’ve always had a soft spot for his traditional platformer outings as in Kirby’s Dream Land, his return to it, and Kirby Triple Deluxe that stick to his roots as a platforming star. That’s exactly what Kirby Star Allies does, though it does do a few things to change the formula up a bit.

It starts off, as every Kirby game should, in the pastel, brightly coloured Dream World. A dark ritual has spread some nefarious evil everywhere. For some reason, Kirby’s perpetual nemesis King Dedede and his army of Waddle Dees are gathering up all of Dream Land’s food. When Kirby gets to Dedede’s castle, he discovers his hammer-wielding arch-frenemy isn’t his usual self. A fiery purple heart – part of the Dark Curse – has him under its spell. It’s up to Kirby to vanquish the curse. Of course it is. Look, Kirby games have never been known for their narrative impetus. 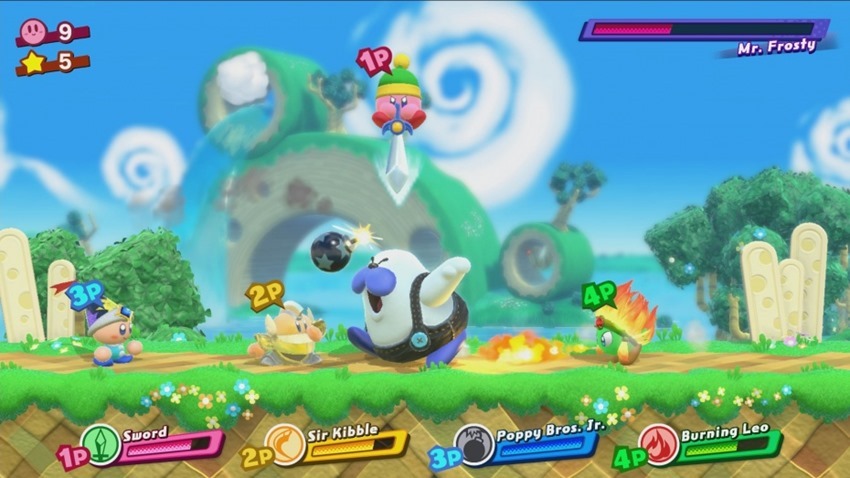 Kirby’s not alone this time though, and the carnation-hued hoover has a few friends with him. In addition to his usual ability to suck up enemies and copy their abilities, Kirby can now befriend his foes by throwing a heart at them. He can recruit up to the three friends to help him through the games various levels, who’re controlled either by the CPU or by real people. You can even enlist the help of King Dedede or Metaknight. By splitting the Joy-Cons or pairing up extra controllers, up to four people can play for some manic couch coop. Of course, it’s best played with real people, but the AI is mostly competent.

What makes it a little different is that Kirby and his newly acquired chums can combine their powers (but not summon Captain Planet), to create new and interesting powers. Combining fire abilities with the sword one, as an example, creates a powerful fiery sword, while combing ice abilities with the rock abilities creates a curling stone that can be used to push certain levers. It’s in combining all of these abilities where most of Star Allies fun presents itself. Using the right combinations of powers to find hidden items makes each level a bit of a puzzle, and you’ll have to use unique combinations to find the elusive rainbow puzzles pieces, healing items and triggers for extra stages. 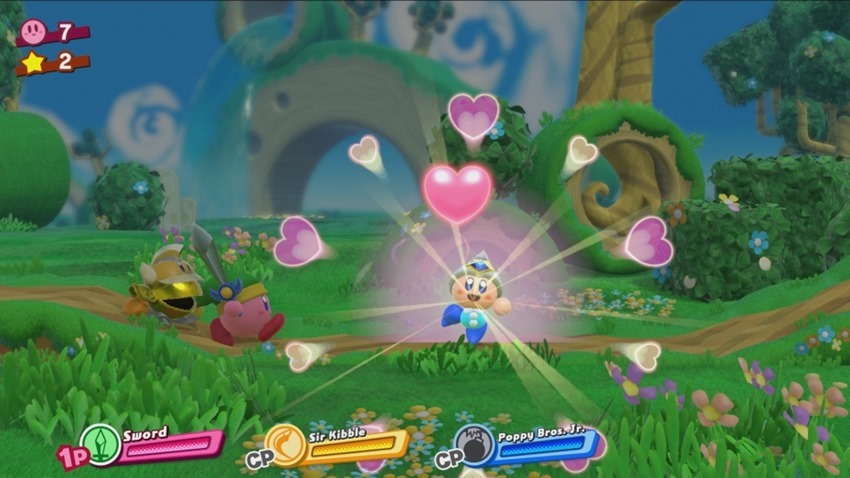 There are also a handful of new abilities for Kirby to copy, including Artist, Spider, Festivale and Broom ones that expand Kirby’s repertoire. The abilities, as always, have a bit more depth than you’ll see on the surface, giving Kirby air attacks, ground attacks and other ways of dealing with the perils of platforming.

Star Allies also throws in something new with Friend Abilities. To activate those, players will have to have a full team of four when they stumble upon four-player platform. Their quartet of hapless heroes will transform into a different things, like a bridge for other characters to cross, or a Friend Train, which ploughs through enemies and crushes everything in its way. They help break up the pace of regular platforming, injecting a bit of variety when they sporadically appear. 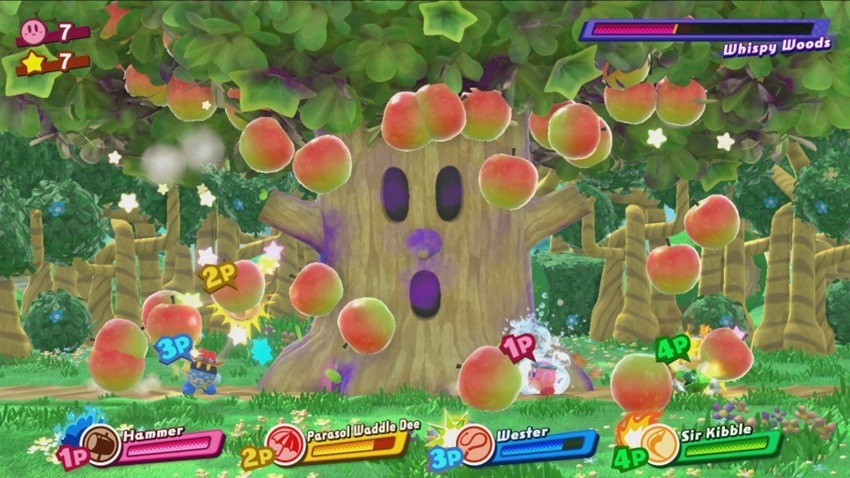 Kirby games are usually unchallenging games to play. The challenge that does exist usually comes in finding the hidden collectibles. Here though, it all feels a little too easy. The hidden puzzle blocks aren’t deviously obscured, and the constant barrage of attacks – especially from CPU-controlled allies – makes enemies largely inconsequential.

This is unfortunately true for the game’s bosses. While favourites like Guardian of the Forest Whispy Woods and Meta Knight return, they and all of the other bosses can be beaten by pure brute force. Some bosses may require different combinations of attacks to really best, but there’s no need to figure any of it out when just spamming attacks works just as well. 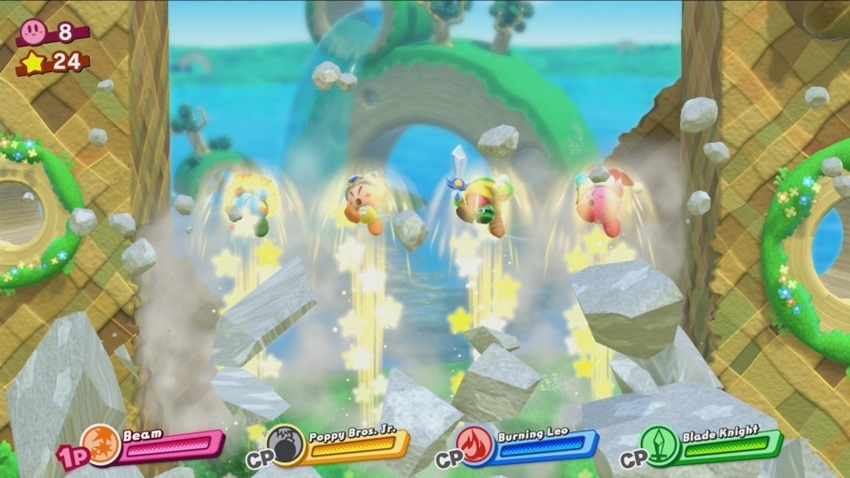 Outside of the story mode, Star Allies also features two minigames that are unlocked from the start. Chop Champs is a simple minigame that involves chopping down trees quickly, while Star Slam Heroes has Kirby and friends whacking meteors. Both can be played using motion controls or with traditional buttons. Once you’ve beaten the game a few other modes unlock that let you replay the game without Kirby, choosing from any of his allies instead. There’s also a timed Boss Rush mode that lets you select a full team and try to run through bosses as quickly as you can.

It’s vibrant and it is fun, and the mix of mechanics pillaged from older Kirby games works – but it’s missing the sort of spark many other Kirby games like the excellent Planet Robobot, or the unbearable endearing Epic Yarn. If you’re looking a bit of breezy, polished multiplayer fun then Star Allies is a great choice. If you’re looking for something inventive, that breaks out of the traditional Kirby mould, you may be underwhelmed. There are also regular loading screens that don’t quite ruin the experience, but they definitely hamper it.