Given the choice, how would you win a war? Would you fight with honour, grace and bravery? Or would you follow my lead, kick fate in the balls and use every single underhanded tactic available to you in an effort to secure victory? Obviously option 2 if you’re smart, because fighting a war with virtuous tactics is a recipe for death and a cheap military funeral. 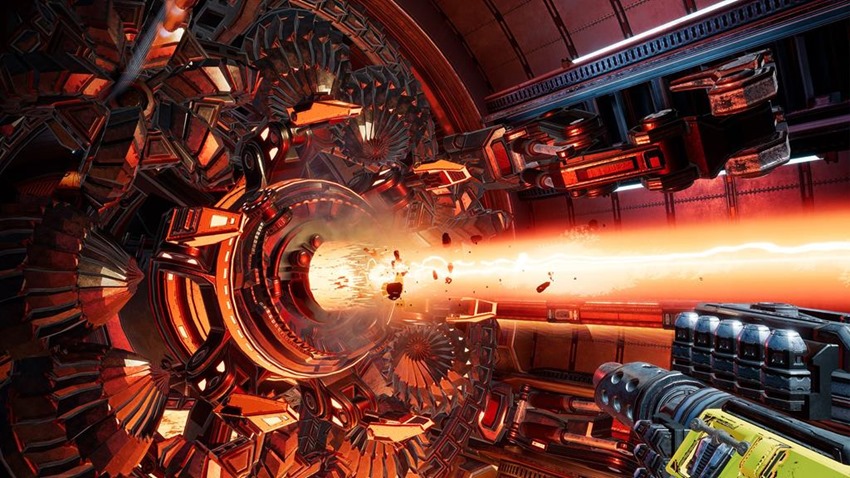 In a lot of ways, that idea sums up Mothergunship. Earth has been invaded, aliens are wreaking havoc across the skies and only a lone super-soldier can save the day from enemies who throw everything and an explosive kitchen sink at your face. Sometimes a highly advanced mechanised suit of armour isn’t enough when your vision is filled with more bullets than Sonny Corleone’s last stand in The Godfather.

Sometimes, you have to use the tactics of your enemies against them. If two can play at that game, then Mothergunship is an experience that charges players with delivering some justified karma at terminal velocity. Sure, you could storm one of the many Mothergunship drones with a shotgun in one hand and a blaster in the other, or and hear me out here, you could actually make a gun that fires off red, white and blue star-spangled rounds of freedom at the various mobs of enemies who await you. 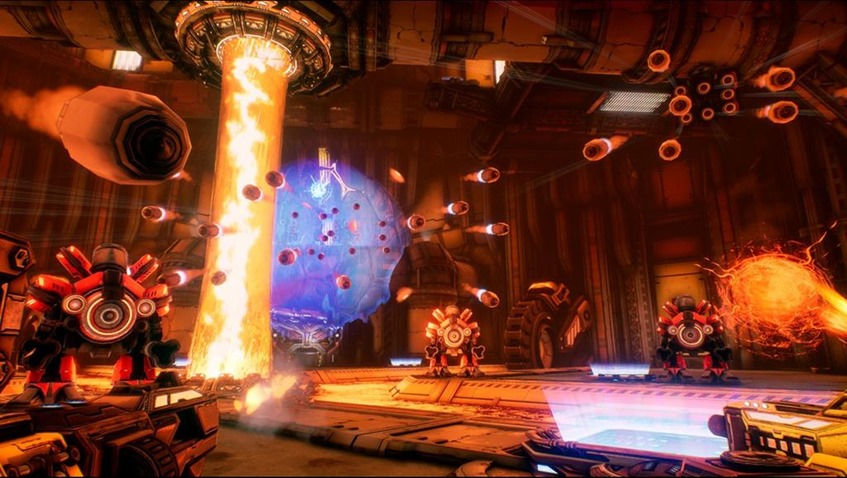 The core appeal of Mothergunship, is a chance to create guns of legend. Every mission gives you a chance to grab new parts, combine them and create an abominable middle finger to gun control advocates as you blast your way across the cosmos. Feel like mounting three flamethrowers onto a single frame? You can do that! How about a gun that combines lightning cannons, rapid-fire incendiary fireworks and gigantic spiked balls of doom? You bet your Charlton Heston-signed autograph that you can do that!

The catch here, is that for all of the hundreds of combinations available, there’s only a limited amount of energy available to you. It’s infinite, but it’s that very delay between firing and recharging that can spell life and death for your soldier. Do you go all in on a single gun that combines everything and allows you only one shot at a time? Or do you go for an economical build, that you combine tight gymnastics with as you scrape away at enemy health bars? 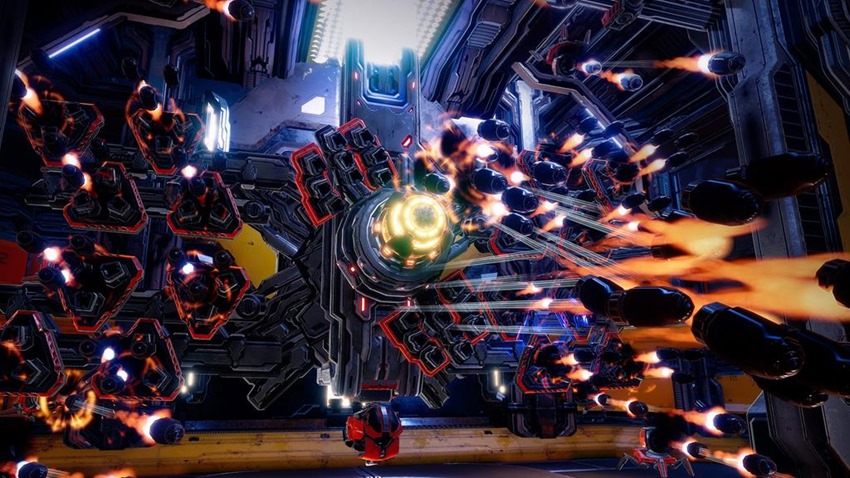 The other spanner in the works, is that you never truly know what you’re going to face. Each environment in Mothergunship is randomly generated, upping the difficulty and throwing more swarms of bots at your bullets as you work your way around. Die, and you lose everything that you’ve acquired. Survive, and you have a chance to buy new parts and rejigger your weapons for the mystery menace ahead, which may or may not turn out to be an entire wall of tracking missile launchers that gives you absolutely zero room to manoeuvre. Bastards.

Combined with the blisteringly quick pace of action, Mothergunship feels like the bastard child of DOOM and the roguelike genre where you have to expect the unexpected. The core gun-crafting system is tighter than a Republican-voting American’s belief in their second amendment, while the actual story is kept light and charming thanks to a supporting cast of talking heads who range from dad-joke delivering frogs, sarcastic crew chief and a commanding officer who is all macho one-liners and single-digit brain cells. 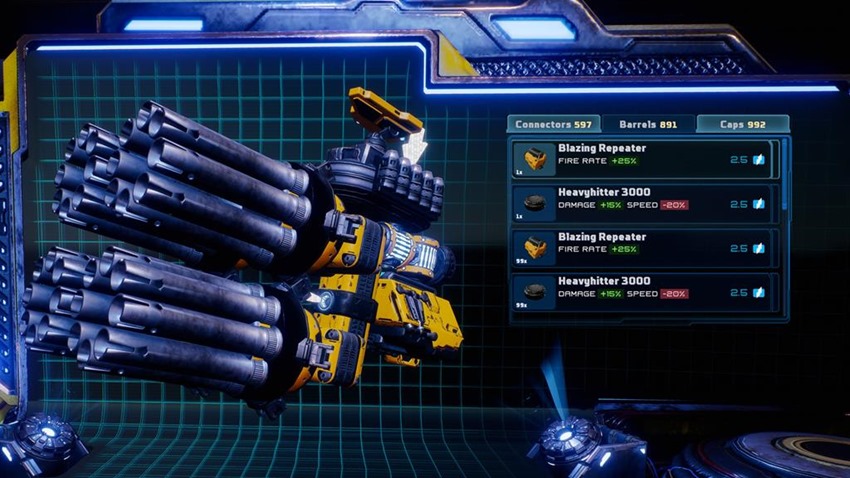 I like that. There’s a simple approach here, one that doesn’t dumb the player down with needless exposition and gameplay mechanics as the focus lies not only on surviving the numerous trials ahead, but by prevailing. Mothergunship grabs you by the scruff of your collar, puts massive guns in your hands and lets you run loose with them.

Simple, cathartic chaos that makes for an amazing white-knuckle ride of bullets and mayhem. While co-op gameplay will only be released later this year, Mothergunship functions as a superb back to basics solo shooting experience that throws a ton of challenges at players and expects results. It’s the purest first-person shooter I’ve played since 2016’s DOOM, that feels rewarding when you experiment and sublime when you see the ballistic fruits of your labour. 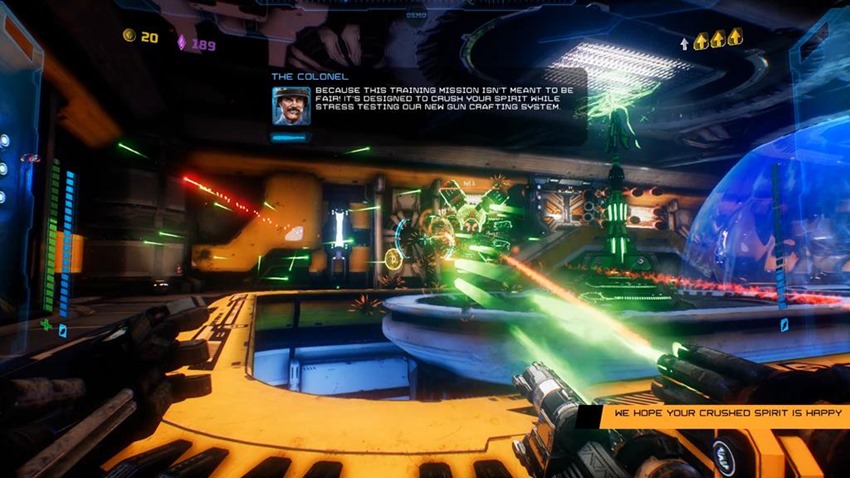 If you’re looking for the real boots on the ground experience of 2018, you can’t go wrong with the singular action focus of Mothergunship.