I love how Square Enix has been going back to their old-school JRPG roots as of late, even going as far as opening a new studio dedicated to creating these types of games. While I personally love I Am Setsuna and enjoyed Lost Shpear, they both felt like a throwback rather than a game made for the modern era. Octopath Traveler on the hand is the first game to finally strike that balance between nostalgia and modernization, resulting in a game that takes me back to my childhood while never feeling like it’s trapped in the past. 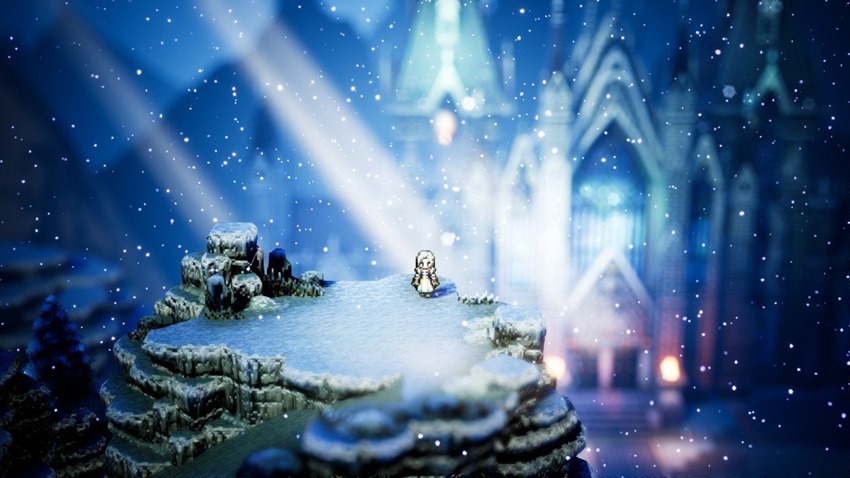 Octopath Traveler’s main selling point is that the game sets out to tell eight different stories from the perspective of eight different protagonists. What’s not immediately clear however is that these narrative arcs don’t intertwine at all, at least not in the traditional sense meaning there is no big baddie that all characters band together to defeat, and instead it’s more of a compilation of eight intimate and character-driven short stories. While some may be put off by this fact, I found it to be a refreshing take on the usual JRPG narrative structure and it also helps that each character and story is enthralling in their own right.

The story arcs themselves might seem a bit typical at first, but the writing and characterization is what really sets it apart. On one end of the spectrum the game tells the simple yet heartfelt tale of Alfyn, the travelling apothecary whose sole purpose is to go to different parts of the world and help cure the sick and suffering. While on the other end you have Primose, a once-exotic dancer on a quest to find her father’s killers. It may seem that telling different stories, with no link to each will potentially lead to a disjointed narrative experience; the freedom of independent story arcs however means that Octopath Traveler can easily jump between different themes and evoke a myriad of emotions without ever feeling like a jumbled mess. Though all of the stories never intertwine, characters still travel together throughout the journey. What’s even weirder is the fact that they never interact with each other during cutscenes. While it comes across as the game trying to maintain focus on an individual character, it’s still odd, at first that is. There are little skits called Travel Banter that can occur during your adventures where two characters will have a little interaction with each other. It’s very reminiscent of the skits you find in Tales of games, but they’re not as long-winded or frequent. I absolutely love them however as it really cements that these characters are indeed traveling together but it also gives you a bit more insight into their character and personality. Like the rest of story, it’s very well-written and mostly avoids the usual trappings of silliness that JRPGs often find them in. I also love that while the stories are indeed separate from each other, the world and lore remains consistent throughout, and there’s a lot of subtle connections you can slowly string together as you play. As much as I’m gushing about the story, which is just exceptionally good, some of the design choices in the game do unfortunately hamper the experience a bit.

Each character’s story is divided up into a few chapters. You can choose how you want to tackle it and because all of the arcs are independent of one another there’s no real order but there is a recommended level attached to them before you start it. This can mean that you’ll find yourself needing to grind, though battles are enjoyable enough that it never truly feels like a chore. The real problem is the way chapters are structured. Every single chapter for every single character follows the exact same pattern. Visit a town, go through some story exposition, tackle a dungeon, fight the boss and go back to town to complete the chapter. Rinse and repeat. After a while it does really become repetitive and I would’ve loved some variety but it sticks to this rigid structure throughout. Thankfully there’s a ton of side quests that alleviate some of the repetitiveness. It’s nowhere near a deal breaker but the tedium does rear its head a bit the more you play. 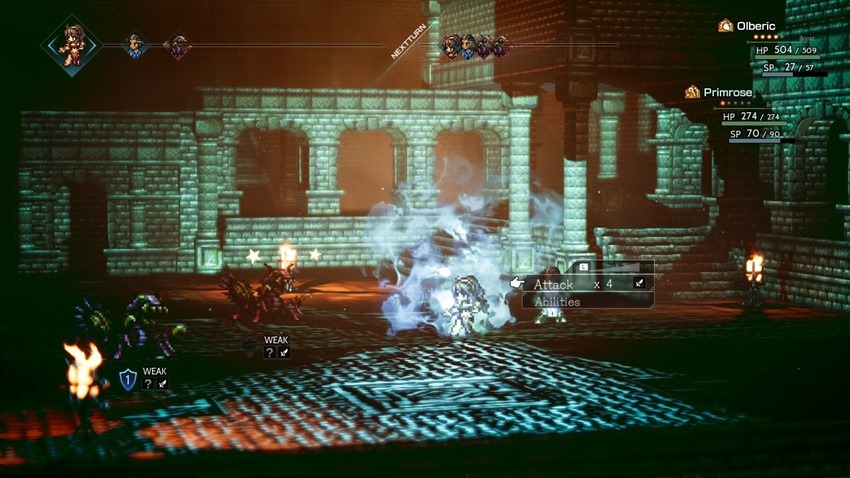 Another unique mechanic to the game is the Path Action. Each character has a unique skill that affects how you interact with the world. Therion, being a thief can steal items from NPCs whereas Olberic can challenge them to 1-on-1 duels. Other skills are used during combat such as H’aanit’s ability to capture and summon wild beasts to her side. Path Actions are really a great way to differentiate characters and they actually add quite a bit of interactivity with NPCs that you would otherwise ignore in other games. My favourite has got to be Alfyn’s Inquire and Cyrus’ Scrutinize which you can use on NPCs to learn a bit more of their backstory. It’s surprising how detailed these little NPC excerpts are and not only do some of them have really important lore about the world but they also contain pertinent information for some of the side quests, often leading to optional dungeons and encounters. I think this is a really clever mechanic that adds a nice layer of proper roleplaying and interactivity to the world. 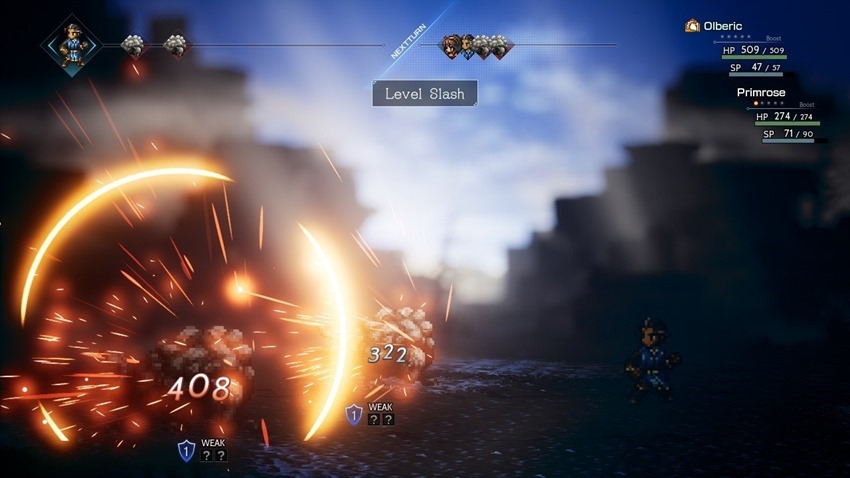 Not only does Octopath Traveler tick most of the boxes when it comes to storytelling but the turn-based combat is just so much fun as well. There are two main mechanics that play an important role in combat and that’s the Break and Battle Point system. Breaking entails attacking an enemy with a weapon type or elemental spell that they’re weak to. Every enemy has a certain number of these attacks that they can withstand and once they reach that threshold they’ll enter a Break state whereby they’re unable to act for a turn and they’ll take more damage. Battle points on the other hand are expendable points that you accumulate every turn that you can either use to attack up to four times or add four times the power to your special moves. It’s this balancing act of managing your BP and trying to Break the enemy that adds a great deal of strategy to combat as you have to always think ahead and plan well in advance what your next move will be and because boss encounters in particular last for quite a while and are really tough, you can’t just choose your strongest attack and hope for the best. 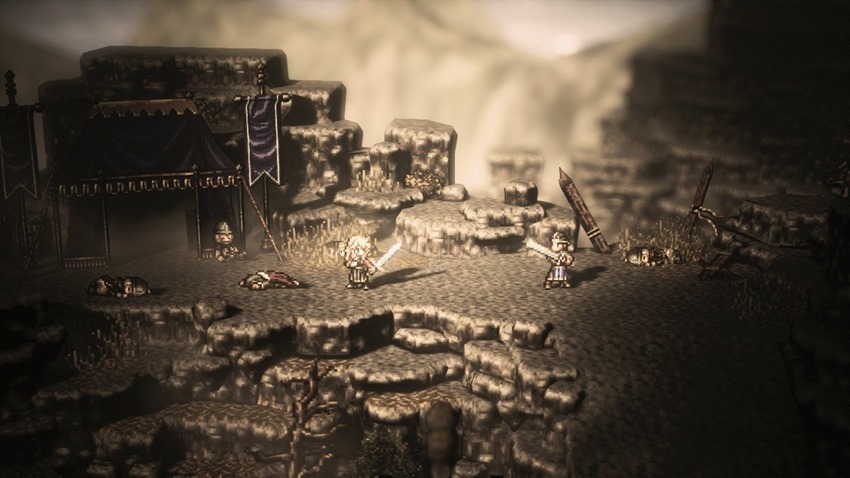 There’s also a great deal of versatility when it comes to building your character and team composition. Every party member has a primary class that they start out as but later on unlock the ability to specialize in a secondary one as well. Each class has 7 normal skills, 1 ultimate or Divine skill as it’s called here and 4 passive abilities. So you could for instance have a Warrior who specializes in physical damage and tanking, learn skills from the Hunter class to use bow abilities while equipping passives from the Apothecary class to mitigate the effects of status ailments which further enhances his tanking capabilities. It’s incredibly fun to play around with and you can freely switch between secondary classes so experimenting is actually encouraged. While it may seem like you’re just making one character mimic another, they still have commands that are unique to them that aren’t transferred over when switching classes so they still maintain their identity and the secondary class system doesn’t make any one character obsolete. Ever since the days of Final Fantasy V and Tactics I’ve had an obsession with Job systems and Octopath Traveler really scratches that itch by providing one that is simple yet flexible enough to cater for a wealth of options. 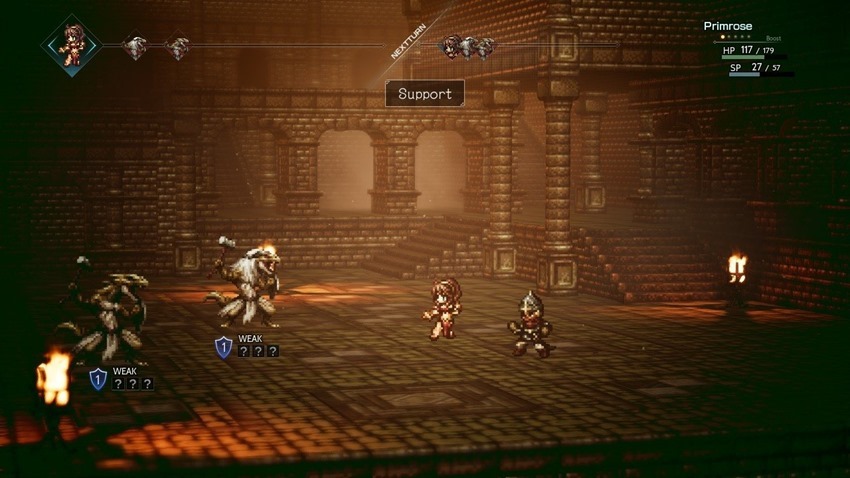 The most striking thing about Octopath Traveler is its visual style. Dubbed ‘HD-2D’ by the developers, it manages to blend the 16-bit pixel art style of the JRPGs of old with HD textures and effects to create a beautifully modern yet nostalgic look. It kind of reminds me of 3D Dot Game Heroes with its clever use of draw distance and things like adding a slight blur effect in the distance as well as a really bright shine to water. Not only is it one of the best looking games on the Switch right now, but it also has a soundtrack as good as anything you would find in the days of a Nobuo Uematsu JRPG composition. There are even great little touches like each character having their own unique intro which blends seamlessly into the boss battle theme. As it stands now this is easily in the running for the best OST of the year.

Octopath Traveler manages to feel both nostalgic and modern at the same time. Its narrative is a wonderful compilation of eight character driven short stories while existing in a world seeped in rich and interesting lore. The combat is absolutely fantastic and is a blast throughout while the art style and music are some the best works Square Enix has ever done. Structurally there are some issues as the way the game progresses can feel a bit repetitive after a while but it’s honestly not enough to sully what is otherwise a master class of a JRPG. If you’ve got a Switch then this game is an absolute must-play.