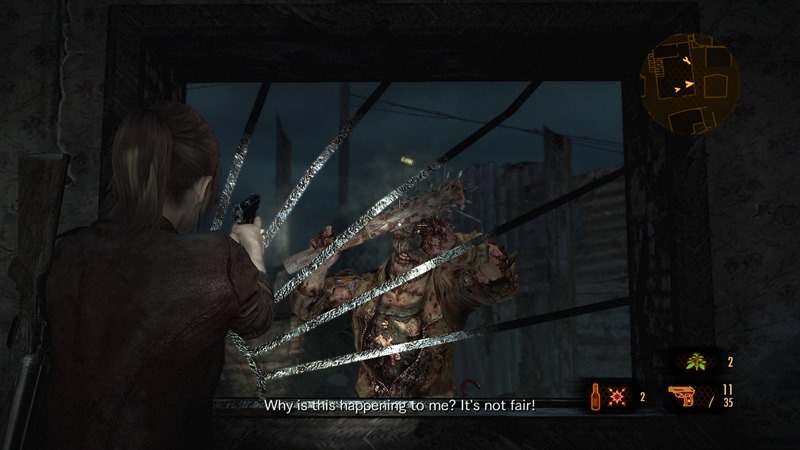 It feels just like yesterday that I reviewed the first episode of Capcom’s latest Resident Evil title, Revelations 2. It was a solid start to the season, leaving me with a healthy craving for the next instalment. If you’re eagerly awaiting the next episode too, the good news is that it’ll be out soon. The bad news is that… well there is none. I thought it was just as good as the first episode, if not a teeny bit better.

Episode 2 continues the story with Claire Redfield and Moira Burton finding two of their TerraSave comrades, Gabriel Chavez and Pedro Fernandez. The four of them team up to find supplies for a nearby vehicle that may aid their escape. Gone are the claustrophobic corridors of the prison in episode 1. Instead, players are thrown into a more open, village/town environment, which is unfortunately also crawling with enemies. 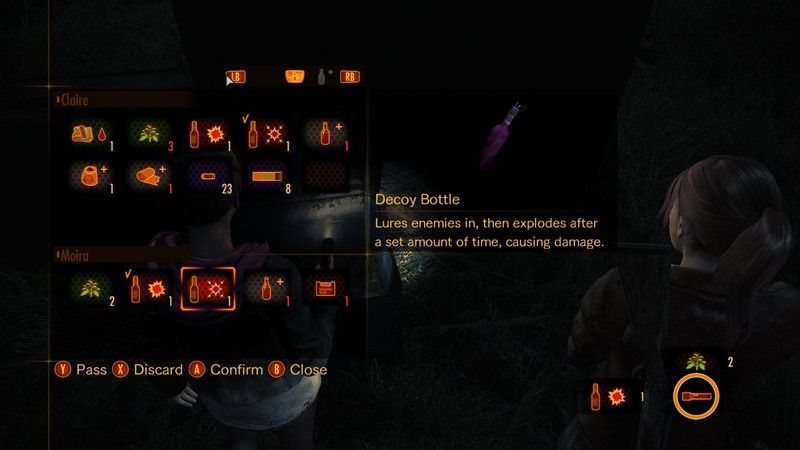 Remember when I said ammo was almost too excessive in episode 1? Forget I ever did – I was young, naive, and very dumb. Episode 2, at least the Claire and Moira part, upped the action dial to 11. Sure, there are still tense moments, but it felt like there were a whole lot of extra enemies to dispatch. There are moments when you have to defend a specific objective, and they just keep coming.

It upped my ammo consumption to the point where I had a scrap of bullets left for each weapon at one stage, barely enough to take on any new threats. This gave me mini heart attacks because honestly, I didn’t feel up to killing hulking brutes with my little peewee knife or toothpick crowbar. I can’t count the numbers of times I swore under my breath whenever I missed a vital headshot. I relied on the switching of characters more than ever to ensure I maximised my damage potential. 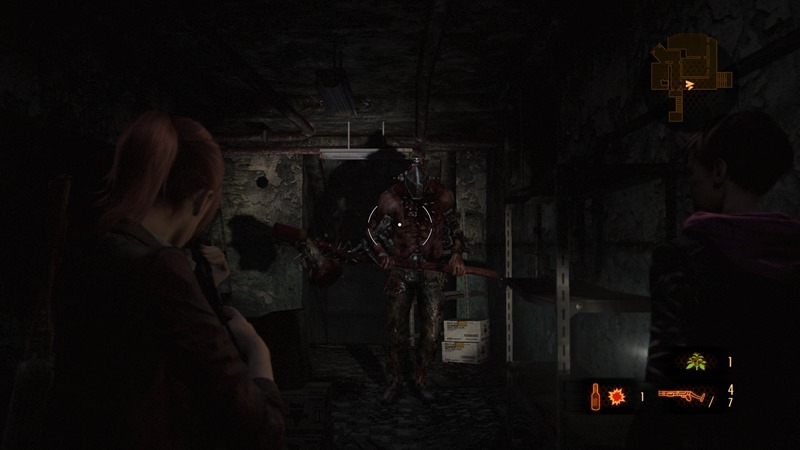 Barry and Natalia’s segment in this episode on the other hand, felt completely different to the above. Barry is one-man army for sure, but this episode definitely had a stronger focus on stealth. Unlike Claire or Moira, Barry can instakill an enemy – if he is able to sneak up behind them. It’s an absolute necessity, as his enemies are a lot tougher and all capable of turning him into a Barry-sandwich within seconds. Taking them head on is certainly possible, it’s just something I would not recommend.

Thanks to Natalia’s (still super creepy) ability to see enemies through walls, it boils down to timing Barry’s approach. Still, it’s nothing short of terrifying to finally get up close, have the monster turn around at the last second, and hear yourself screaming as poor Barry gets klapped like the weights at the Benoni gym. THE HUMANITY! 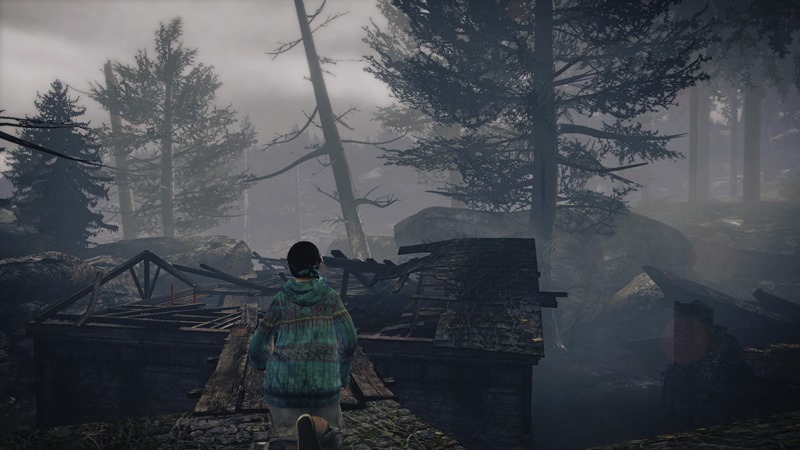 Speaking of things that klap, there are some new enemies to tango with across both Claire and Barry’s campaigns. The most memorable for me are the creatures that debut in the latter. They are invisible, at least to Barry. Players need to rely on his sidekick’s keen supernatural sight to spot them.

It’s quite something to have to use Natalia to see and point them out, then switch to Barry and shoot their last known position. Taking a few misfires prompts Natalia to offer guidance; “aim lower” or “to the right”. Problem is, once your aim is true, it’s not a matter of emptying out your clip until the enemy drops dead. If you’re lucky, you’ll maybe get one or two hits in before they dodge, forcing you to switch to Natalia once more to see where they went.

It sounds like a tedious, annoying gameplay aspect on paper. It wasn’t though, instead offering some nice palm-sweating moments. The screen distorts as the enemy closes in, upping the panic somewhat. This had me switching wildly between the two, probably more often than necessary, to make sure I hit the damned thing. 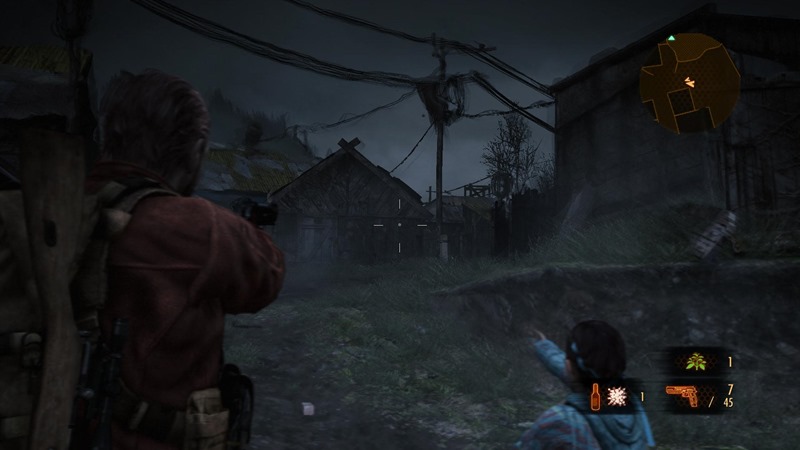 Apart from shooting invisible bugs, I had a fair share of minor ones to deal with too. At one point in Barry’s campaign, the AI simply refused to follow me regardless of whether I told them stick close or stay behind. I had to switch and move both characters up through that area before the problem went away. I had another incident where I had literally just used a herb, and the AI inexplicably used another straight after. As a man who was already sweating bullets over the lack of ammo at that particular moment, I was nearly in tears to see my greenery go to waste for no reason.

My raid mode still doesn’t want to work. I finally managed to get the first mission to load, only to receive a crash upon completion – nulling any progress I had made. A pity, as the mode has received a few hours of additional content with the release of episode 2. I have taken to the Internet, and it seems I am not alone. There is a very small pool of others suffering from the same issue. I hope Capcom iron it out soon. 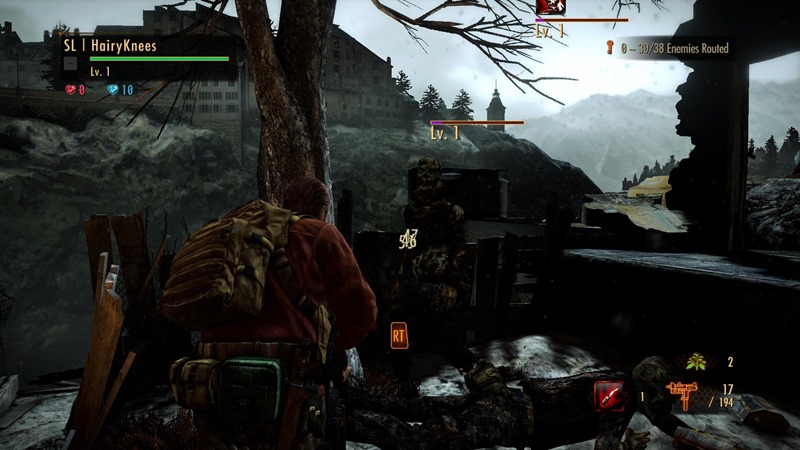 In terms of duration, the campaign of episode 2 took me a little over three hours to finish – an hour or so longer than the first. Apart from the above mentioned hiccups, I’ve had an absolute blast, and eagerly await next week’s release. At $5.99 an episode, or $24.99 for the season pass, it’s easy to recommend Revelations 2 so far. Capcom have done well with these first two episodes. We’ll just have to wait and see if they can carry the momentum through to the very end.