I am one of those gamers who somehow managed to miss out on all the Nintendo action when I was younger. I have never, till now, owned a nintendo console (Unless you count those old Chinese 8-bit knock-offs from way back when and I do still own a GameBoy Advanced, but never a console) although I have played on some of them here and there and really loved what they had to offer. I was too stuck into my Sega Megadrive and PC to even notice that any other consoles even existed. I am starting to think that I really missed out.

I got a copy of Mario Strikers Charged Football to review and instantly I was a bit sceptical of the Mario branding on the game. Now, I have also just recently had my first experience with Mario Kart and I can honestly say that I am having a heck of a lot of fun. The Mario themed racetracks are all relevant and brought back good memories of the franchise. So now I move onto Mario Striker, which is essentially trying to achieve for football games what Mario Kart did for Racing games. But have they succeeded? 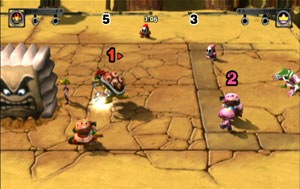 What Nintendo has essentially tried here is to make somewhat of a mix between Fifa Street and Mario Kart, A street football game with the Nintendo power-ups and abilities that we all know and love. Shells, stars, banana peels etc.

Utilising all the characters from the Mario franchise as leaders of their respective football teams, the game makes you go head to head with other characters’ teams in various tournaments. The graphics, sound and overall presentation of the game isn’t bad, with a futuristic arena sports feel to everything, but there is nothing in particular that stands out.

The major problem I have with this game is one of it’s special features, the Mega Strike. When your team leader has the ball and enough space to charge up a Mega Strike (which is more often than you would expect), the game brings up a little power/accuracy bar not too different from a 3 point click bar in many of the golf games you see today. Depending on how you do on the bar, your character flies up into the air and performs a series of shots at the goalie, with as many as 6 balls. If you are the one being shot at, you are put into a minigame where you have to save the shots using the Wiimote’s pointer. 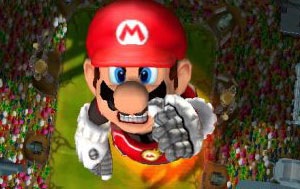 You see, this feature has the ability to make the rest of the game feel absolutely meaningless. Mixed in with the fact that with power-ups flying around and obstacles from the arena getting in the way, it can become difficult to see what’s going on or even where the ball is.

You can imagine a scenario where you are 90% into the match, with a score of 1 – 1, time is running out, things are getting tense and then thanks to the Mega Strike, one of the players ups the score to a ridiculous 13- 1 in under a minute. Making you feel as if the game itself is essentially nothing but a distraction until either captain uses the super move to sway the game.

I start to think that if this game wasn’t plastered with Mario characters, then it would have just come and gone without anyone taking note of it. It’s a shame because I find that it had potential but was let down by a few bad design choices.

Scoring:
Gameplay: 6/10 [Controls aren’t bad but it ultimately feels meaningless] Presentation: 7/10 [Nothing Special] Sound: 6/10 [Average] Value: 7/10 [Multiplayer could keep you busy, but not for very long] Overall: 6.5/10 [Essentially a Mega Strike mini-game with stuff to keep you busy in between] Better than: [Getting hit in the face with a football on a cold morning] Worse than: [Other Mario themed games and most Fifa Street titles]