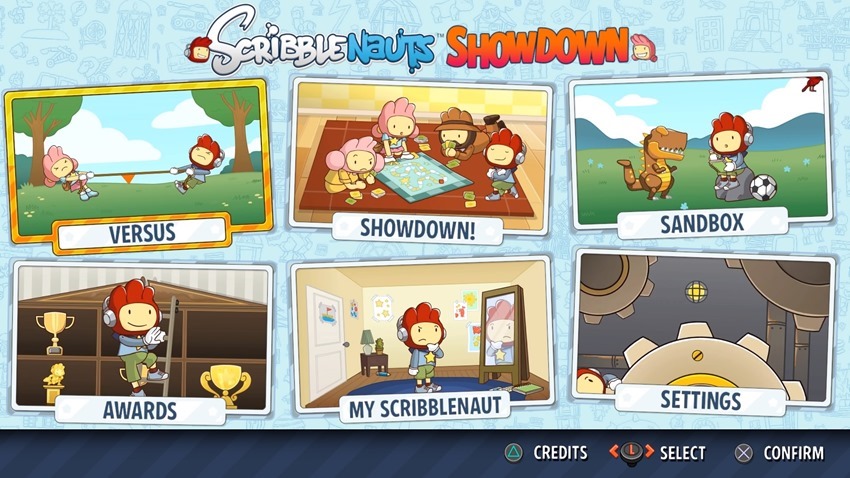 Scribblenauts Showdown is the first Scribblenauts game to release on Xbox and PlayStation. It also, incidentally, is my first experience of the Scribblenauts series. My overall impression? Showdown won’t be on any Game of the Year lists come December, but it’s a surprisingly diverse and extremely customisable party game.

Want to wrack your brain by solving the meaning of some cryptic icons? Need the video game equivalent of an arm wrestle to decide what you’re doing next with friends? Feel like playing a board game but you’re home solo? Showdown’s four different modes have you covered. 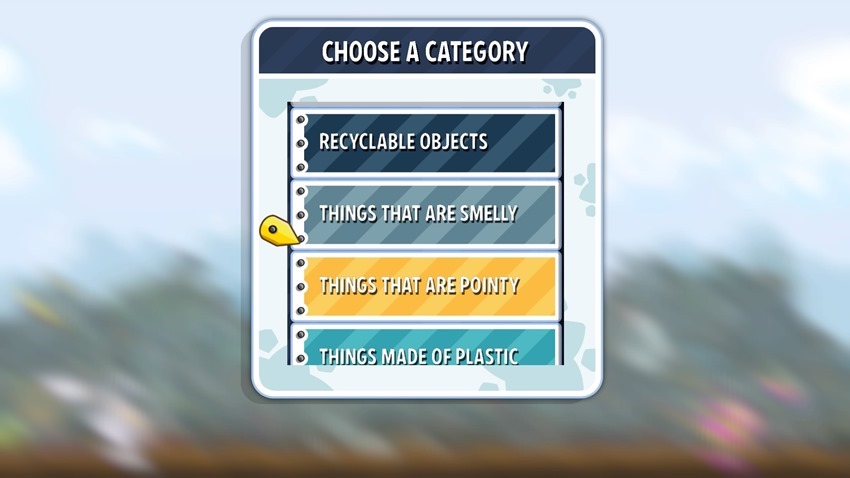 The thing I’ve always loved about the Scribblenauts franchise is that the only limit is your imagination. Ok, yes if you’ve played Scribblenauts before, you know that there are some limits to what you can do, but your choices are wide and the game gives you a lot freedom. Scribblenauts Showdown still has this freedom in principle, but doesn’t let you flex your muscles as much as you might like. 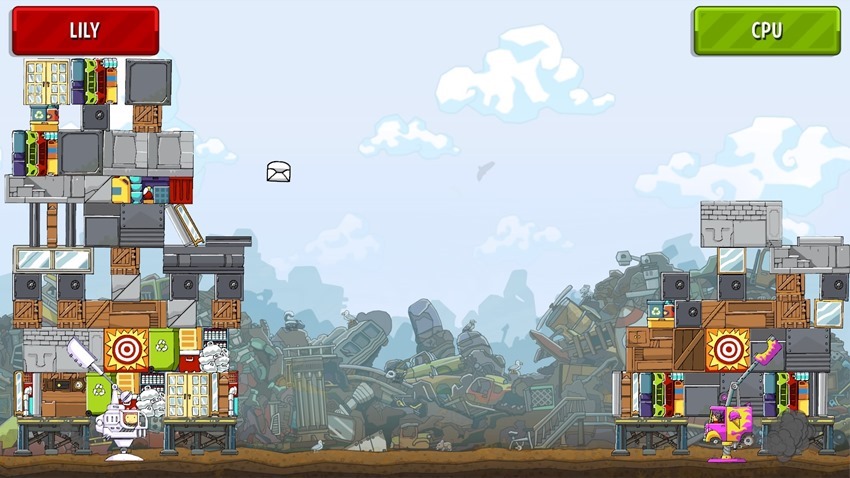 For those of you familiar with previous Scribblenauts games, you’ll know that it’s (mostly) about puzzle solving. This core mechanic takes a back seat to the split-screen multiplayer party modes found in the Showdown! and Versus modes. You can still get the original Scribblenauts experience in the Sandbox mode, but it’s very much shunted to the side in favour of the new playstyles. 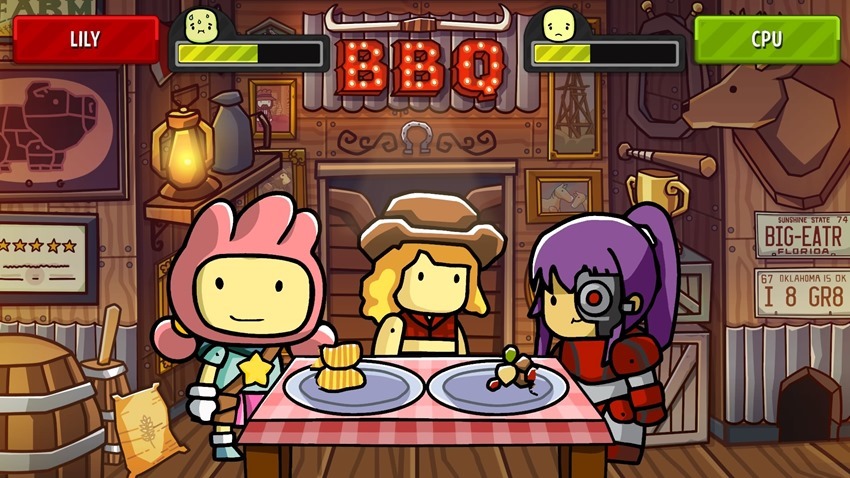 Versus is your fast-play mode, which will pit you against the CPU or your buddy sitting next to you on the couch. You start by choosing the type of game you want to play, whether that be a word-centric creative challenge, a purely action game, a mix of both, or your exact choice from 27 mini-games as diverse as out-racing each other to collect fireflies, an eating challenge (don’t vomit!) and a magic carpet event where you must catch and balance whatever noun you chose at the beginning of the round (pro tip: teacups stack better than tennis courts). After choosing your Versus challenge, you proceed to pick the number of challenge rounds, and you can even set your digital opponent’s difficulty. 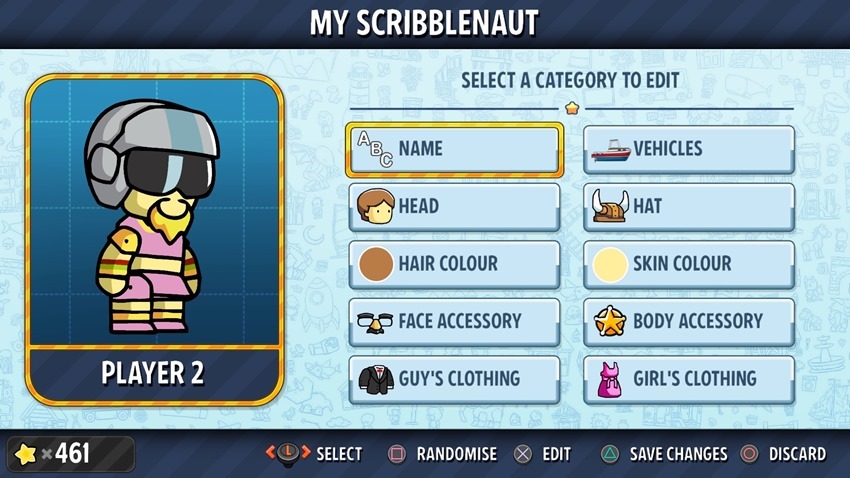 I had some fun with the mini-games in Versus mode, where you go head to head with another player, either by having you create an object to use with Wordy, or just facing off against one another in arbitrary challenges with Speedy. These mini-games involve anything from fighting in a medieval castle to balancing objects on a flying carpet. One mini-game in particular is an almost-identical copy of Flappy Bird, while another draws a suspicious amount of inspiration from Angry Birds. And, honestly, after playing through them multiple times, they all start to feel like mobile game rip-offs.

With a total of 15 Speedy games and 13 Wordy games to choose from, the same challenges come up more often than you’d like. You’ll easily have seen everything twice in the space of a few hours. 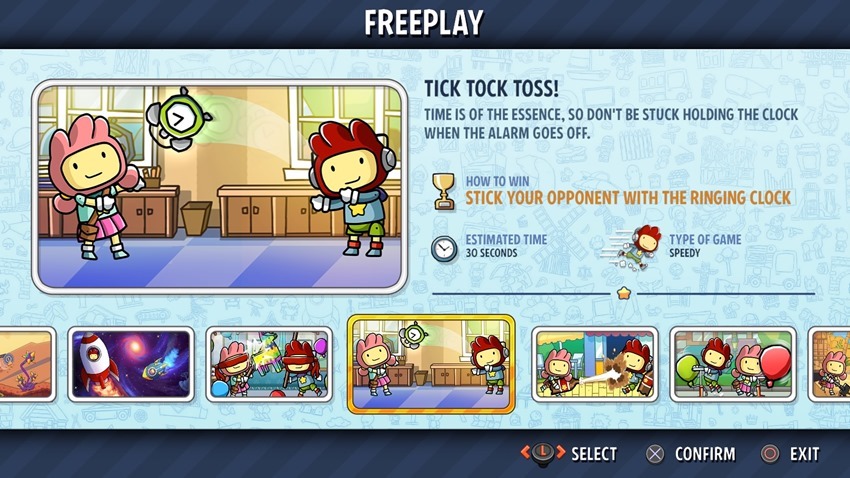 For the record, Versus is the fastest way to pick up Showdown’s primary mechanics. Typing out words has always been a struggle on consoles, and as letter selection is key to Scribblenauts, you want to get a handle on the process, which uses your right thumb stick and is linked to a vast “predictive text” library to speed up the process.

Versus offers your expected party game instant gratification. The challenges can be frantic, but they’re low investment, lightweight and over very quickly (usually within 60 seconds). By contrast, a game in titular Showdown! mode can easily cross the 90-minute mark if attempted with the maximum 4 players – and, again, you can play this with an AI opponent if you’re alone. 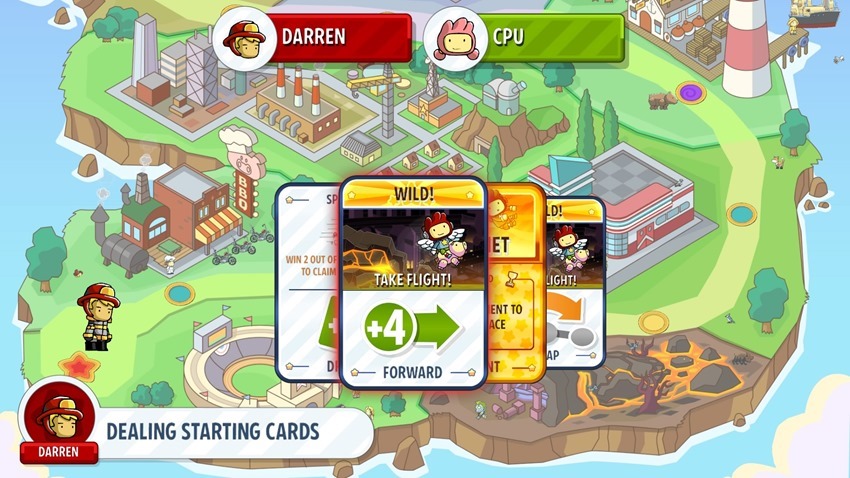 Showdown! is essentially Scribblenauts: The Board Game. Players advance along a track, aiming to reach the endpoint first. Each turn they receive cards which can be used to initiate one of the Versus challenges for various rewards, including bonus cards and fast-travel. Alternatively, they can screw over other players by stealing their hand, for example, or forcing them to move back several spaces. Showdown! is hands-down the meatiest, and most strategic, gameplay option in the latest Scribblenauts. This said, brace yourself for Munchkin levels of back-stabbing that can paralyse a game, and make victory frustratingly impossible for anyone. 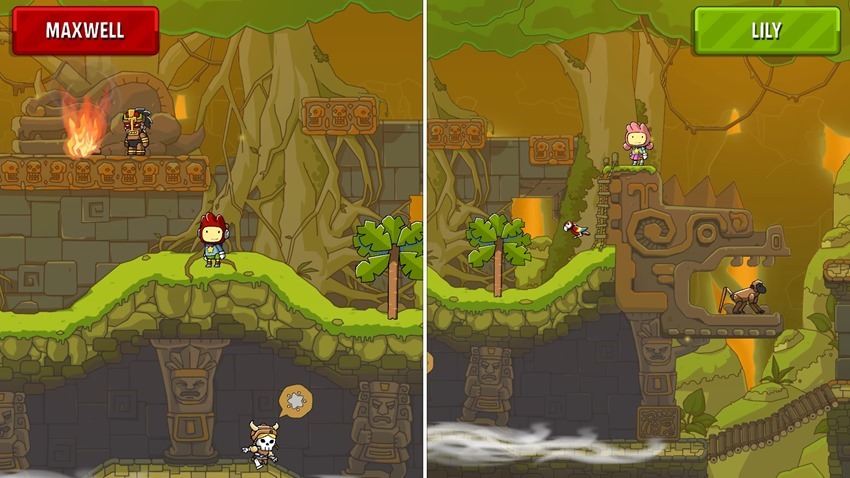 For me, the Sandbox mode is the quintessential Scribblenauts experience, but even then it feels oddly constrained. There are only eight Sandbox levels, three of which are unlocked from the beginning. The rest you have to purchase with the Starites you’ve gathered, which grates me to no end. Though Starites are easy to accumulate, I begrudge having to spend them to unlock levels, as opposed to having the levels open up as you progress.

The puzzles in the Sandbox mode are either ridiculously easy, or near-impossible to solve without paying for a hint with your Starites. Adding to the constrained feeling is the fact that the levels are really small, and when they’re split-screen, everything feels too busy and overcrowded. The Sandbox mode is a watered-down version of what Scribblenauts used to be, added in like an afterthought when it could have been Showdown’s most redeeming feature.

Would I rush to buy Scribblenauts Showdown for a games evening with friends? Probably not. Would I invest in it if I regularly had all-ages gatherings? Absolutely. It’s fun, it’s frequently a good laugh and as far as family-friendly gaming goes, it’s lightly developmental with its combination of word games, logic puzzles and hand-eye coordination challenges. 7/10

Scribblenauts Showdown lacks the magic that made Scribblenauts so enjoyable to begin with. Forcing the concept of solving puzzles by spawning random objects into recycled mini-games, or removing it entirely in others, has removed the zest of the game. It’s still fun, but only for a short amount of time. Anything longer than an hour or so and you’ll be looking for something else to do. There’s not much in Showdown to capture your imagination, or keep you from getting bored after a while. 6/10