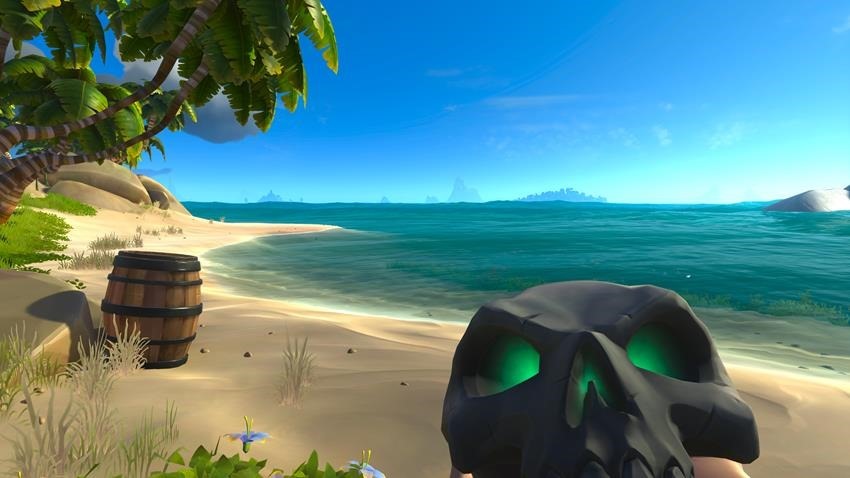 Sea of Thieves is a lot like an advertisement that isn’t meant to reflect reality. You rear your head at its unmistakable beauty, take pause to admire the intricacies of its make-up and painstaking work that is clearly on show. But that beautiful veneer is just the surface of something that lacks a payoff below. For all its sea-faring splendour and captivating sailing, Sea of Thieves fails to make a case for returning to its empty, boring world that it desperately wants you to get lost in.

At its core, Sea of Thieves is the ultimate pirate simulator. You can play alone (not advisable in any regard, although it’s totally doable) or with a merry band of up to four other compatriots. Each crew nets you a ship, which can come in two types. Or, rather, sizes. The smaller solo and duo-built Sloop is armed with only two cannons and one sail but is far nimbler than the Galleon. It, however, makes up for its size with raw strength and firepower, making it the ship of choice for most players out at sea now. 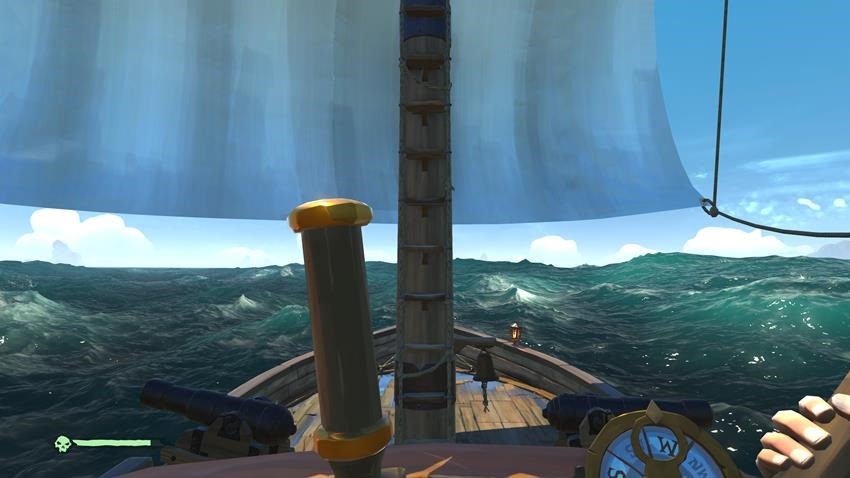 Sailing a ship is half of the fun in Sea of Thieves. Someone must make sure you don’t steer into a rock, but that’s usually a two-person job. The sails obscure any view from the deck, so you’ll need someone in the crow’s nest giving you a heading always. The rest of the crew will be set with checking the map for navigation, adjusting the sails to catch the wind and keep up speed, or dropping the anchor at the perfect time for a gif-worthy handbrake turn at the shores of an island.

It’s not smooth sailing always and managing your ship when you’re not skimming across serene waters is extremely rewarding. Storms bash your vessel around like a toy, letting water pool up on the lower decks and risk sinking. Lighting will regularly strike you on the deck if you’re not careful, and tear holes in your hull that you’ll need to patch up before scooping up water over the side. There’s a lot going on just to get from A to B in Sea of Thieves, and the thrill of having full control over your ship never gets tiring. It’s got all the right elements and affordances to make it approachable but complicated enough to allow for confusing, hilarious and memorable disasters. 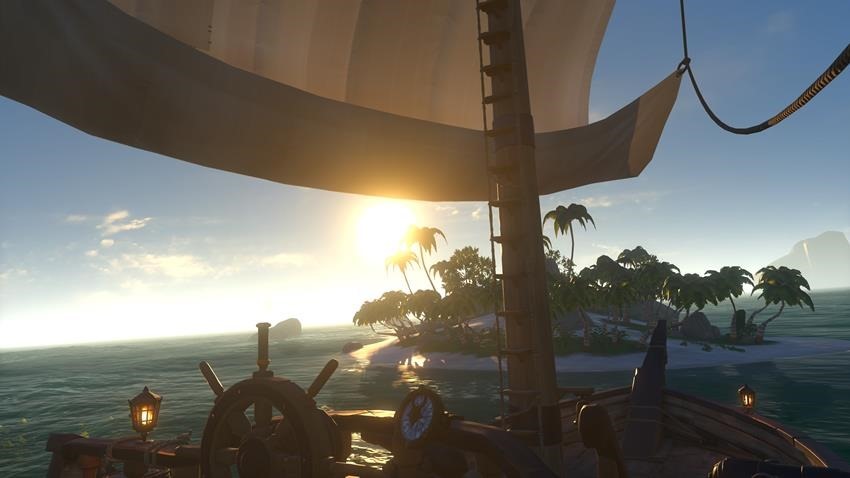 This is the depth that you might find yourself drowning in most of the time, because honestly, it’s the only meat Sea of Thieves has on its bones. Its sandbox world is tightly engineered to be a playground for stories you share with friends. The time you and a friend hunted down a Galleon in the distance to try to sink it and steal its crew’s treasure, despite being woefully underpowered. That other time where you successful staved off a raiding crew waiting at an outpost to just pick your treasures off you at the end. Or the rare chance of going toe to toe the with mighty Kraken and winning. These moments pepper Sea of Thieves with the sort of excitement you expect from a silly pirate game, but they’re both fleeting and difficult to replicate without the right circumstances.

In another game, this is where more structured content is used to fill the gaps, but Sea of Thieves shows its ugly other side here. The singular means of progression you have in Sea of Thieves is the hunt for gold. Gold can be attained in various ways that all boil down to the same pattern. You sail somewhere, you pick up an item of value, and you sail back to an outpost to sell it. With gold you’re able to purchase new gear, such as swords, muskets, clothing, beards (yes) and more. None of which affect the way you play the game. All of Sea of Thieves’ loot is cosmetic, perhaps in a bid to keep an exclusively player versus player environment fair to both veterans and newcomers alike (it’s not trying to be like Rust, for example). 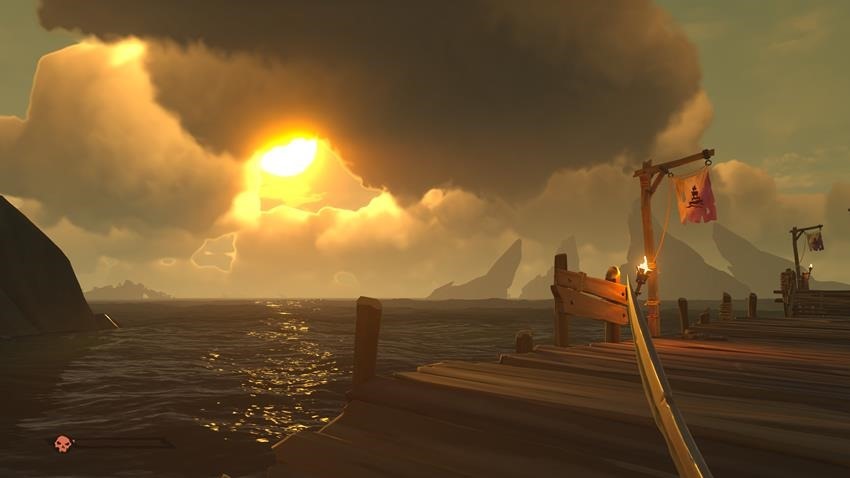 This is appreciated, but Sea of Thieves’ loot is nowhere near compelling enough for the time investment it requires. Cosmetics are exorbitantly expensive, so you might find yourself in my position and only be able to afford a single hat or compass upgrade well over ten hours into the game. And even then, their allure is so short-lived that you’ll find yourself questioning the point of it all in the first place. It’s neat to have a sword that suddenly glints gold in the sun or a blunderbuss with a jewel-encrusted on the side. But when you’re fighting enemies (particularly the ridiculously tanky gold skeletons, the only real variant on the only enemies in the game) and see no tangible difference to your effect on them, it’s a vain upgrade that loses its lustre very fast.

Perhaps part of that problem is that Sea of Thieves doesn’t give you anything that interesting to do. Its three factions of quest givers all stick to their initial offerings in perpetuity. One will give you bounties on though skeletons and ask you to bring back their glowing skulls for reward. Another will charge you with digging up a treasure chest and again returning to sell it. And the last just gives out orders for random livestock fetch quests, forcing you to randomly sail between islands in search of a combination of pigs and chickens. They don’t get harder as you increase your standing with each faction either. Instead, they just become more frustrating, sometimes requiring you to sail between a handful of islands repeating the same task or replacing clear clues with riddles so that mindlessly digging around a land becomes even less captivating. It’s mundane in the worst way, and without anything else to turn to, it’s a chore that Sea of Thieves really isn’t worth playing for. 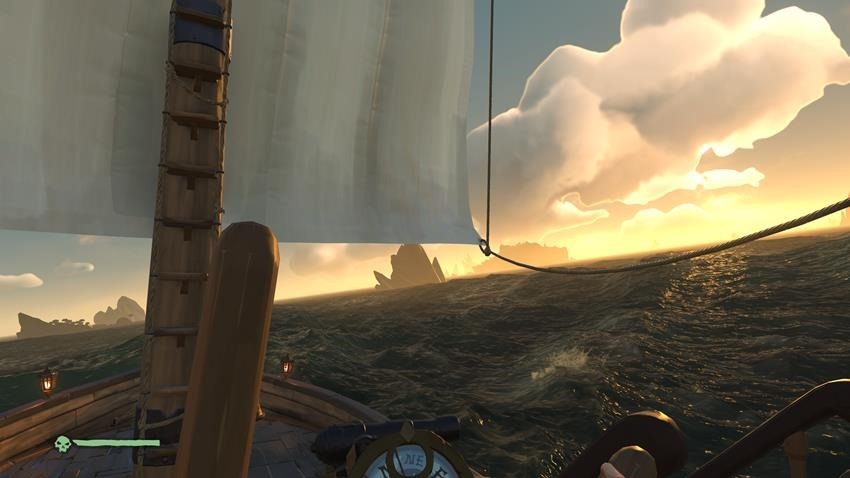 Sea of Thieves is a live game, so Rare have every opportunity to change this, but right now there’s a distinct feeling of incompletion in the high seas. Islands are beautifully handcrafted to be anything from specks of trees and sand on the horizon to massive abandoned forts that have seen some war in the past. But while their outer shell tries to tell a story, it’s centre is just missing. There are no characters to hear stories from. No strange enemies to bump into. No curious scribbles on paper or different treasures to find. At most you might stumble onto another undocumented chest, or a message in a bottle telling you of a bigger bounty for another skeleton. They tie into the same loop as before, so their discovery is more a sigh of defeat than an exclamation of a surprising find.

There’s a surprising amount of charm along the edges that tries to mask this. Eating a banana without its skin is hilarious, as is pooling your vomit into a bucket after a heavy stint of drinking to throw onto your crew members. Synchronizing sea shanties with a host of instruments can make the doldrums of sailing hurt a little less too. But for every bit of charm, there are quality of life issues that sting just as hard. Not being able to invite a friend into an already running session is confusing, especially when it means quitting, losing all your current loot and restarting a game again, now without a good crew member you might have been matched with. Sea of Thieves also regularly crashed on me, with servers still unstable after a week at sea. Sometimes my ship will randomly float into the air or start sinking for no reason, only to be followed by a server disconnect and the destruction of whatever loot I was hoarding for hours. It’s infuriating. 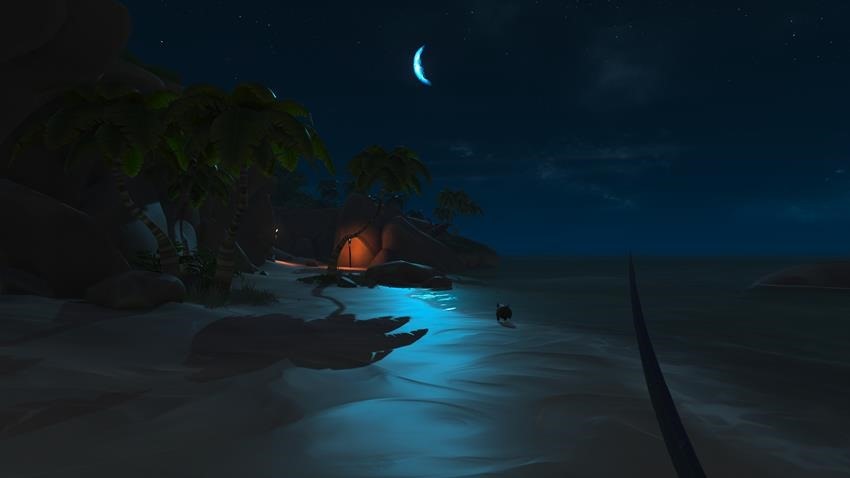 When it comes to presentation though, Sea of Thieves bears no equal. There’s a certain magic to seeing a sunrise or sunset over the high seas, with its golden light bouncing off the ebbing water and producing a spectacle that’s hard not to stop and soak in. Its cartoony models are bathed in glorious colours, popping out from distant shores and bringing the entire experience alive. But the water. Oh, my goodness the water. Not only is Sea of Thieves’ representation of the unpredictable oceans the most realistic and incredible looking simulation of water I’ve seen yet, but it’s a benchmark that seeps into the game in such interesting ways. The way waves force you to adjust your sailing is captivating, as is seeing puddles form on your deck from the splashing seas below. It’s unbelievable at times, and easily the best part of the entire game. 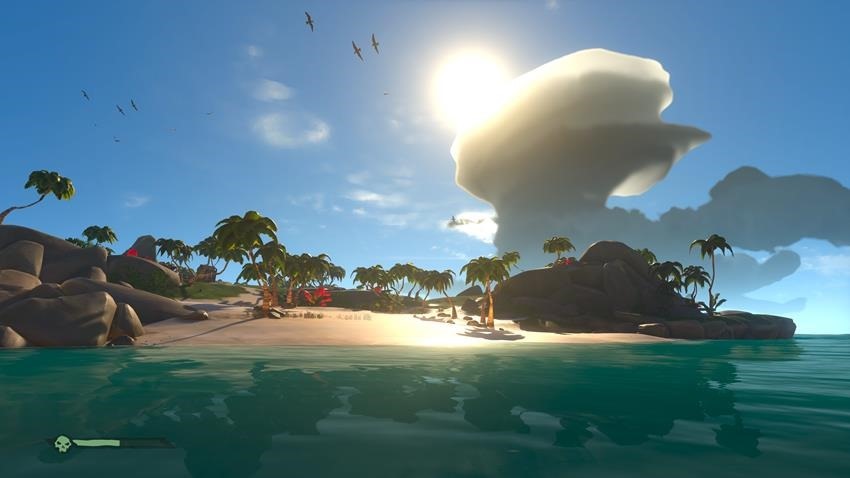 But its presentation isn’t enough of a distraction to make that missing content feel less disheartening. Sea of Thieves is a treasure trove of good ideas with some slightly poor execution, its lacklustre combat and puddle-deep quests being the biggest transgressors. It’s a game Rare can certainly turn around, but not one that requires either your time and money right now to justify its fleeting moments of brilliance amongst the boring realities of its barebones content.