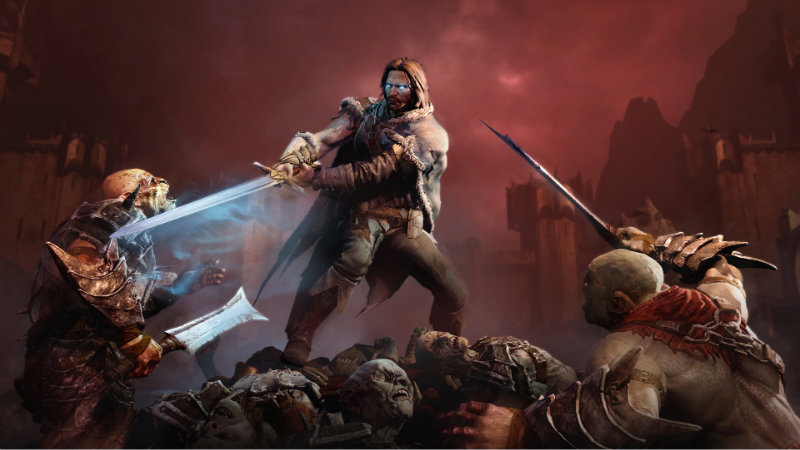 It feels as though all I’ve done since getting Shadow of Mordor is rave to people about how much fun I’m having. It’s been a long time since a game has elicited such a strong and uncontrollably gleeful response in me. There is a lot to love about Shadow of Mordor, and also a few frustrations.

Shadow of Mordor takes place between The Hobbit and The Lord of the Rings and it tells the story of Talion, a Ranger from Gondor whose wife and child are killed. Technically, he is also killed, but instead of dying he is cursed to wander Mordor possessed by a wraith, Celebrimbor. Although their goals are separate, their fates have merged, forcing them to pursue common enemies as they seek to save Mordor and lift Talion’s curse. To do this, Talion and Celebrimbor must conquer the forces in two key areas, the dark and terrifying Udûn and the lush and fertile Núrn. You can fast travel between the two main areas, or within them, via Forge Towers once you have revealed them. Each major area also has its own set of “Sauron’s Army” – a collection of Captains and Warchiefs that make use of the Nemesis System.

The Nemesis System is about as perfect a concept as you can get. When I heard that any grunt of an orc or Uruk could become a boss/captain, I thought it would be some strangely scripted mechanism that would ensure it was always a character intended for promotion. However, this system actually works really well. There I was, looking for a collectible in a fortification when I got sucked into battle upon being seen. Massive brutes were taking me on and whittling down my health as I dodged and countered and continually failed in combat. However, it was that pesky archer in the tower who took me down – he ended up getting promoted to captain and later moving up the ranks even further. His name, strengths and weaknesses came to haunt me, just as I would haunt those who were afraid of beasts or fire as I continually used their weaknesses against them. 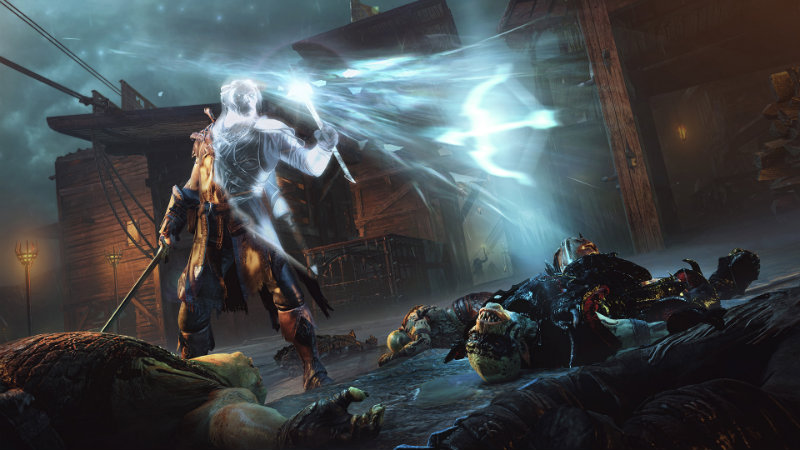 It’s important to get as much intel on these Captains and Warchiefs as possible – knowing which ones can be taken out with a stealth finisher compared to ranged or melee attacks can make a world of difference in difficulty. And the game does offer quite a bit of tricky combat, especially when you’re swarmed by Uruks who are determined to kill you and get promoted. It adds context and motivation to your enemies as well as yourself, making the mobs of enemies seem to not just be mindlessly attacking you based on orders, but because they are determined to advance their own selfish goals.

Dying in the game is frustrating, of course, but also enlightening. As time passes while you’re busy respawning, orc politics are playing out with Captains leveling up, dueling and even getting defeated. This, combined with the excellently executed open-world, helps to make the game feel alive – the consequences of your actions are felt and it seems like you are actually infiltrating Mordor instead of it being designed for your character.

There are a variety of ways to get stronger so that you can defeat these enemies. The game works on an XP system – whether you’re sneaking around and killing orcs, grabbing collectibles or gathering herbs you will gain XP to use towards a two-pronged leveling tree. Half the skills are aligned with the more human abilities you’d expect Talion to have, such as improved combat combos or endurance, while the other half is based on the wraith skills of Celebrimbor, such as wraith dashes, flurry kill and my eventual favorite – branding. Each tier of the skill tree can only be unlocked once you have the necessary power, something that is gained by taking on the Captains – this ensures that your character is well rounded while still allowing players to upgrade according to their preferred play styles. Of course, some skills are locked behind plot gateways, only becoming available once you’ve progressed far enough in the story, and you probably won’t feel compelled to unlock all the skills before finishing off the game. 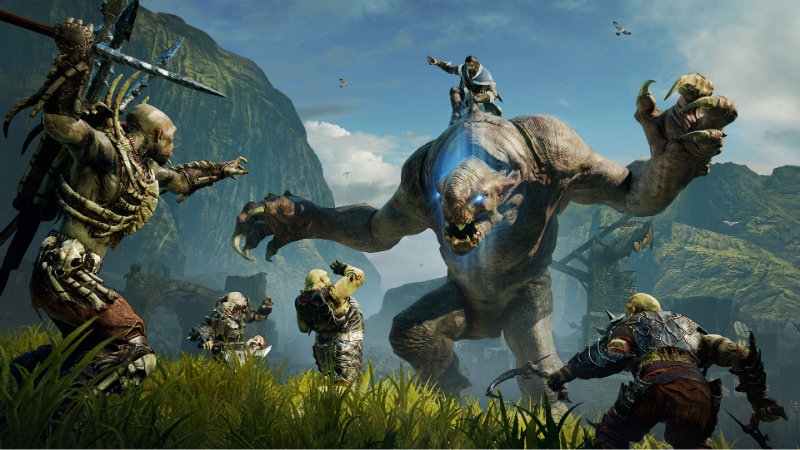 Combat in Shadow of Mordor certainly takes its cues from Batman and Assassin’s Creed. You’ll generally find yourself smashing the attack button unless that counter button lights up. However, there are opportunities for a whole lot more options with combo finishers, the use of focus to slow down time so you can whip out your bow in the middle of combat, as well as upgrades that unlock unique attacks. It improves upon the system in the sense that it does feel more fluid than either of its influences – missing your timing or pressing counter too soon won’t lead your character to stutter or stop moving all together. It’s a much more forgiving system, while still being tricky enough to make it challenging and fun.

Also similar to other games in the genre, Shadow of Mordor has tons of side activities. The Nemesis system is a rabbit hole to fall down, but there are also more missions – these include saving outcasts in Mordor, hunting or gathering, as well as collecting numerous artifacts or key points. Added to this are a ton of challenges to build the legend of your sword, dagger and bow. All side missions take place within the open world, which means you also have a chance of encountering a Captain in the middle, adding a boss fight into a challenge activity. This helps to keep the world feeling sustained and alive – of course a Captain will be in his fort, even if you’re just using his grunts as target practice.

The aesthetics of Shadow of Mordor are beyond compare. The voice work is particularly excellent, with each character feeling alive and individualized. With some tour de force performances, I never doubted the emotions and responses of the various characters. Added to this were spectacular visuals in a world that was vast and explorable. I kept seeking out new parts of the world, checking out glorious vistas and delving into the deepest caves. 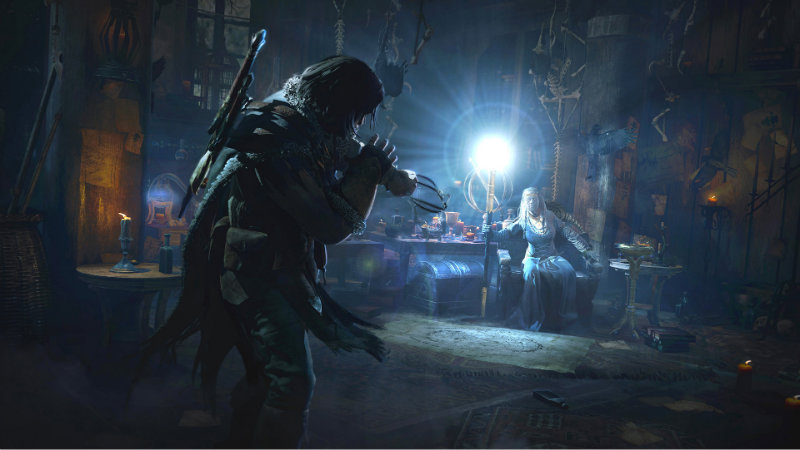 One of my favourite things about playing the game on the PS4 was the exquisite use of the built-in speaker in the controller. While in stealth, you can whisper to attract an enemy to their doom. However, that whisper comes from the controller itself, a subtle and fantastic addition to the immersive quality of the game.

In fact, the game was so very immersive that when problems cropped up they were even more glaring. As usual with contextual parkour, Talion didn’t always jump and climb where I wanted him to go. For the most part the parkour was smooth, allowing me to easily move up and down towers or buildings as I saw fit. However, occasionally the character would get confused and refuse to climb the wall right in front of him, or would climb when I actually wanted him not to. It doesn’t help that the controller mapping is such that stealth is mapped to the button used for parkour in Assassin’s Creed. It took me a while to get used to which button would make me run and climb compared to sneak and skulk.

Similarly awkward was one particular character instance that seemed to miss some post-production attention. Towards the end of the game, you encounter the awesome hunter dwarf, Torvin. He is a fantastic character with some rather enjoyable missions. However, there are frequent mentions of his enormous gut or massive stomach… and yet the character appears to just be normal sized (for a dwarf). There is no enormous belly on the character and the continuous mention of it breaks the immersive experience. 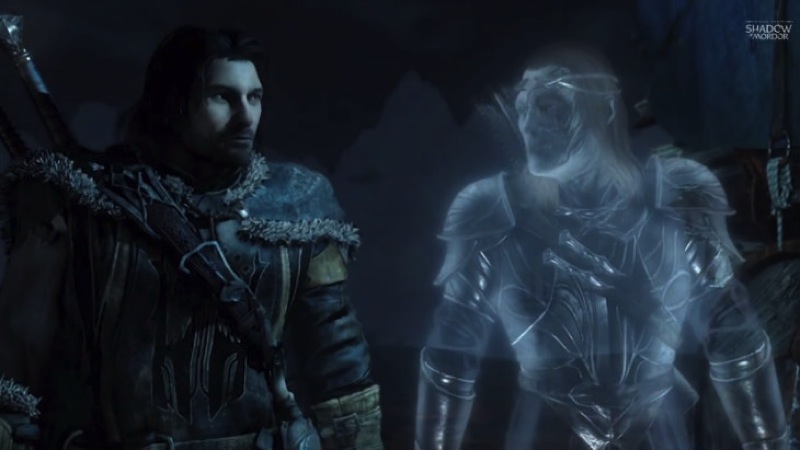 Finally, there is the ending of the game. I will not be spoiling the game, but suffice it to say that after such a deep and engaging storyline, the ending feels like a cop out. The sort that’s little more than a setup for a sequel. The final battle is also less than thrilling and fails to take advantage of all the cool skills acquired over the course of the game, in fact, it’s nothing more than a glorified QTE experience. I didn’t want to finish the game because I was having such a good time playing, and then I felt let down by finishing the game thanks to a poor ending.

Despite these issues, Shadow of Mordor is a ridiculously fun game, filled with all kinds of fantastic, emergent experiences. Running around Mordor, encountering captains, fighting for your life or dying and watching someone benefit from your death – it’s a truly addicting and thrilling game. For fans of Tolkien’s lore, there is also a ton to discover; artifacts can unlock memories and secrets while environments have full descriptions and lore for those who wish to learn more. Just when I thought I’d explored everything there was to do, I kept finding more fun things. Even after watching the credits roll, I wanted to go back into Mordor and hunt down more Captains and Warchiefs.