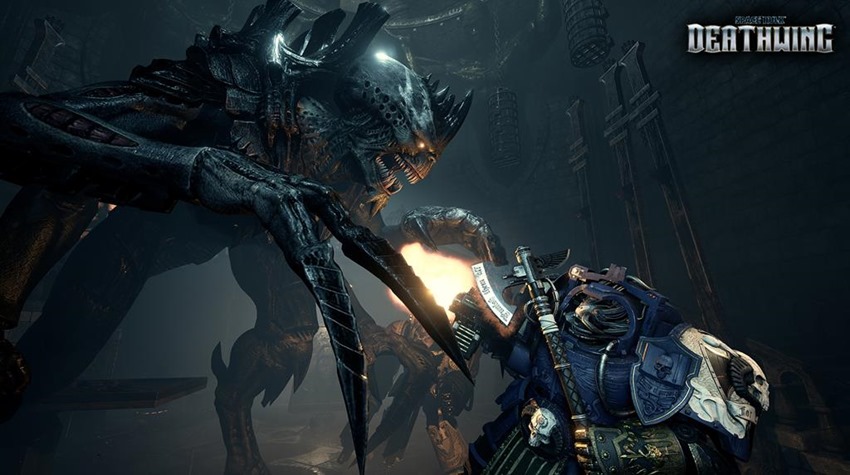 Warhammer 40K isn’t exactly complex. On the surface, it’s a story about faith. Faith that happens to stem from a Messianic figure who certainly didn’t want to be worshipped and eventually evolved into a galaxy-spanning empire that happens to be at constant war with itself, various species and a nightmarish cosmic rip in the fabric of space and time that has unleashed untold numbers of demonic entities that are hellbent on conquering our realm of order.

That’s an insultingly brief setup for Warhammer 40K, a universe whose lore is staggering to say the least. Even the most insignificant of characters have entire swaths of words dedicated to them, such as a random janitor on a backwater planet that has Wiki entry which has more information crammed into it than an entire King James Christian Bible. 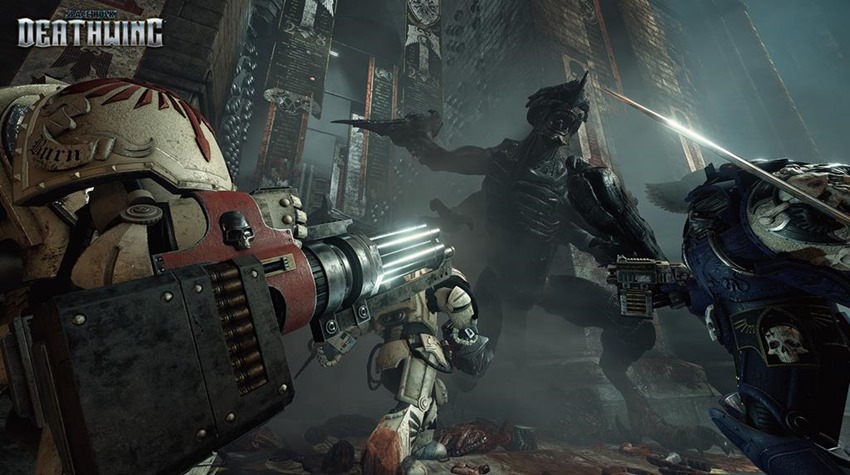 Anyway, Space Hulk isn’t about that guy…yet. Instead, it’s a game that focuses on the some of the biggest ass-kickers in the Imperium: The almighty Terminator Space Marines. Packing armour that makes a Hulkbuster Iron Man suit look like crude cardboard in comparison, the Terminators are the Vanguard against mankind’s greatest threats.

Hulking soldiers who hit so hard with every encounter that a Tyranid gives birth to their power-fist nine months later. They’re legends, the cream of the crop and able to break an entire army in half with nothing more than their faith and an unlimited supply of ammunition that spits forth from the holiest of assault cannons. 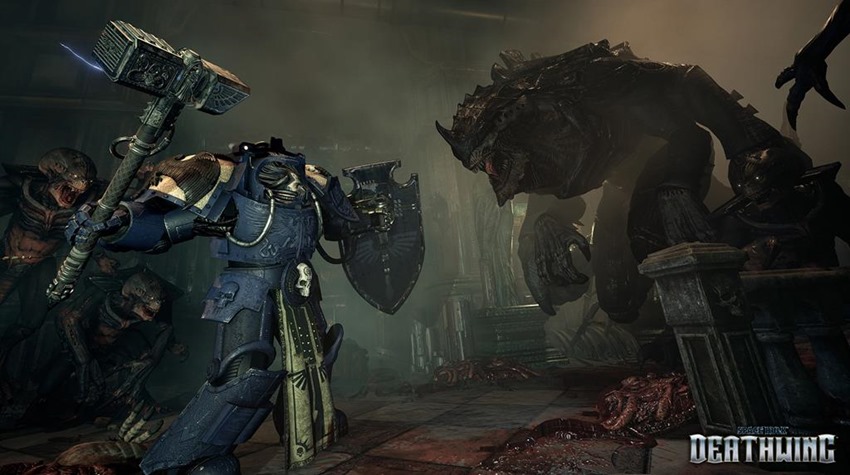 That’s…kind of awesome. You think of Warhammer 40K, and the core idea behind any game starring the favourite sons of the Emperor of Mankind is that of a power fantasy. Of being the kind of badass who doesn’t take cover but rather wades into a mob of Orks with a smile on his face as he pants a planet red with their blood.

On paper then, Space Hulk is what happens when you combine Warhammer 40K with the Aliens franchise. The ship interiors might be gothic monuments to the glory of mankind, but these cosmic churches are crawling with Warhammer 40K’s riff on the Xenomoprhs, the gene-stealing Tyranids who have infested every corner. 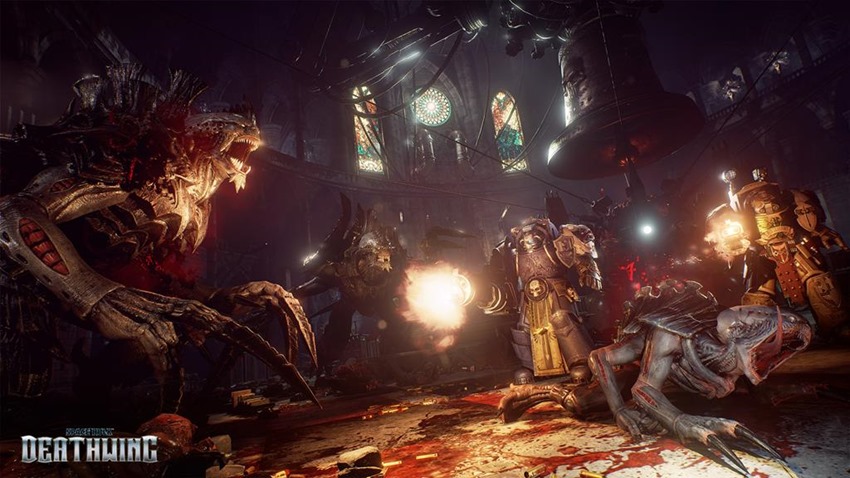 Every corridor is a meat grinder and every open area is a charnel house of blood and sacrilege that makes Event Horizon look tame in comparison. To temper that unadulterated carnage, players need to keep an eye on their armour. Take too much of a knockin’ and you’ll find yourself reacting slower, accruing more damage and eventually falling before the hordes.

It’s an interesting twist, but it doesn’t exactly propel Space Hulk beyond okay territory. In fact, it gets downright boring. Enemies either snipe at you from afar or throw themselves on your bullets, marching to every objective is a slow trudge down monotonous corridors and your battle brothers are nothing more than generic catchphrases on two legs. 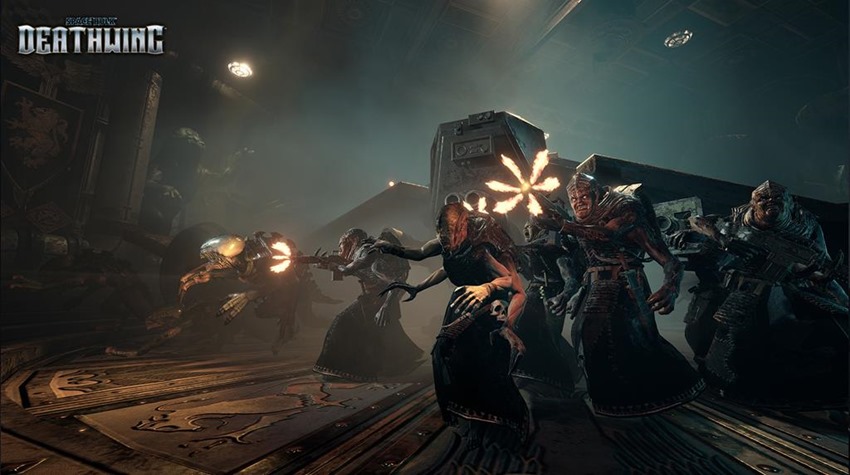 There might be a reason for that boredom, as Space Hulk is designed to be played at its best as a co-op team shooter. While you’re able to leverage the talents of your fellow space marines to help you in a fight, they’re sometimes utterly useless when left to their own devices. Having friends along for the ride doesn’t seem to alleviate the boredom in the slightest, as the monotonous gunplay quickly grows tired and the presentation suffers for it.

Despite it being labeled an enhanced edition, Space Hulk frequently loses the frame-rate plot during encounters and bugs aplenty litter the screen. It’s damning stuff, especially when Warhamemr 40K is firing on all cylinders in other genres currently. Problems are further compounded by the controls and user interface on the console version, which are entirely unwieldy, messy and needlessly complex all at once. 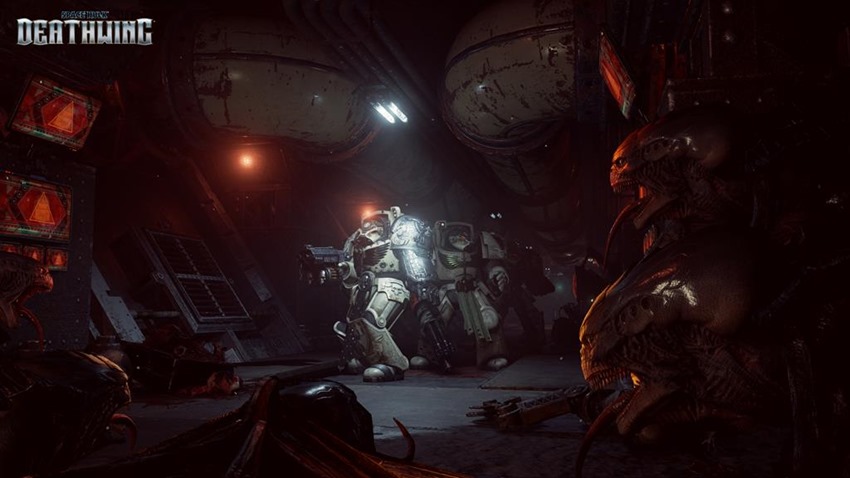 A pity then, because Space Hulk could have been the best use of the Warhammer 40K brand since Captain Titus led an Ork genocide on the Forge World of Graia in 2011. Instead, Space Hulk’s precious few moments of glory are undone by its barely-engaging single-player action, monotonous multiplayer and technical hiccups.